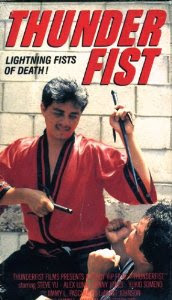 Lee Chung-Dong (Rhee) is a Tae Kwon Do expert and leader of the “Resurrection Movement of Koreans”, a resistance group focusing on fighting back against the Japanese occupation of Korea in the 30’s. It seems the Japanese are constantly harassing Lee, and he teams up with some other fighters, such as Miss Wai (as she’s known in the English dub) (Mao), and the American (or French, depending on the version you’re seeing) Mary (Winton). Mary’s uncle, Father Lewis (Morgan) is a Catholic Priest who is kidnapped and tortured by the Japanese. Even though he disapproves of her Martial Arts, she trains at Lee’s school.

After his abduction, she becomes a nun, but then continues on with Lee’s group to get revenge on the people who wronged her. The final fight features Lee forced to become the “Kickmaster” (one of this movie’s alternate titles) we know he is, because his hands are in chains. Will Lee and his motley band get justice?

Thunder Fist is just one of many titles this movie goes by, and the VHS under review today was released by New Pacific, a label not known for quality. The movie is transferred amazingly poorly, with horrendous picture and sound quality, and even jagged, unprofessional reel changes. It even repeats part of a reel to further drive home how badly done it was.

Plus the movie is dubbed, and the music is louder than the dialogue in many cases. Most of the time the “music” is just pounding drums, which gets annoying after awhile. But there is one funky tune that should be singled out. ALL that being said, it’s very tough to judge this movie on its true merits. The awful presentation hurts the movie, and makes it seem like your standard “chop-socky” outing.

But we’ve been informed that a foreign DVD release fixes most of these problems, and some fans consider this movie, mainly known as When Taekwondo Strikes, as a minor classic. It may seem hard to believe if you suffer through the New Pacific VHS, but we can tell there’s something here that’s buried by the uncaring treatment of this particular release. 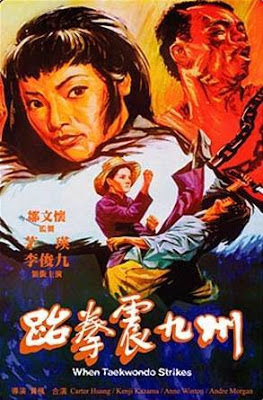 There are plenty of lengthy Martial Arts sequences, including some swordfighting. The movie is also somewhat hurt by its minimal locations, but fan favorites Angela Mao and Sammo Hung are strong, as is Rhee in his only film credit to date. It’s also Anne Winton’s only movie. Interesting legacy.

It’s fairly unusual at this time to see White people in a hard-core Martial Arts film like this, and Andre Morgan, who plays the Priest, was a frequent collaborator with Sammo, even appearing with him in Comeuppance Reviews favorite The Man From Hong Kong (1975). Adding to the flavor of this Golden Harvest production is some classic racism, featuring such dialogue as, and we quote, “these Japs can’t be trusted!” We’re guessing this movie wasn’t widely distributed in Japan.

One of the more “memorable” aspects of this particular VHS release is the box art. These adonises are not in the movie and are clearly models. Just why these dudes were chosen as models remains unclear. Were they meant to draw in crowds of video store patrons?

And the insanity/stupidity isn’t only visual. Just read that “description”. Whoever wrote that never saw the movie. It doesn’t even begin to address the racial tensions of the Koreans, Japanese, Chinese, and Americans/French that simmer and boil over. “high finance and international smuggling”? “priceless treasures and bloodthirsty killers”? “turn me on”? What’s this guy talking about? I guess in the 80’s you could get away with this stuff. It was before the internet. No one’s going to look up this movie, much less check into the accuracy of boxcover copy.

Martial Arts aficionados should check this movie out, but AVOID the New Pacific release.

Also check out a review by our buddy, Tars Tarkas!

Comeuppance Review by: Brett and Ty
Posted by Ty at 9.8.13