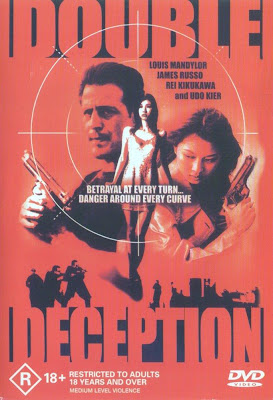 
Luke Campbell (Mandylor, not the guy from 2 Live Crew) is a bodyguard hired to protect Lisa Ozaki (Kikukawa), the daughter of a wealthy Japanese businessman. Due to a recent spate of kidnappings perpetrated by the evil Snake (Russo), Mr. Ozaki hired a lookalike named Maria (Hoshino) to confuse the kidnappers and keep his daughter safe. However, when a two million dollar ransom is at stake, things get very confusing indeed as allegiances and alliances change and shift, while Luke and Lisa go on the run. Will this kidnapping plot go as planned?

Double Deception is a junky, low-budget film that feels low budget. Many times, thanks to quality acting and writing, movies can overcome a lack of funds. Unfortunately, that is not the case here. There are plenty of stupid fights and chases, and some amazingly moronic dialogue thus making this movie a tough sit. It’s a standard plot that you’ve seen before, but this time there are Japanese actors with extremely thick accents that are hard to understand. The quality of the tape is muffled and there’s plenty of wooden acting on top of that. So, from an audio standpoint, there’s a lot to be desired. 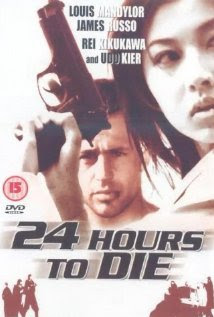 From the minute, early on in the movie, when we see some baddies with those cheap plastic glow-in-the-dark Jason-style hockey masks, it’s easy to see there’s trouble brewing. Udo Kier seems to take things somewhat seriously, but it’s hard to tell as his role is basically a cameo and is nothing more than an all-too-brief walk-on role. Same thing with Joe Estevez. It’s hard to believe this is the second time we’re saying this, but: This movie needed more Joe Estevez! Apparently he’s more important to the structural integrity of movies than we heretofore believed.

There’s a guy in the movie that’s like a stupider Gary Busey, and there’s plenty of 90’s-style high-waisted pants, and a large dose of “90’s tech” cell phones. It’s hard to believe this movie came out in ‘01. It feels more mid-90’s. Rei Kikukawa is attractive, but she should have been subtitled. It would have been more coherent and possibly some entertainment value could have been gained from her trying to communicate with Louis Mandylor. As it is now, Double Deception suffers from a lack of just about everything, with cohesiveness being the main casualty.

It’s hard to imagine anyone renting this in a video store back in the day, but here it is. We can safely say, this movie exists. That’s pretty much all there is to say.

Haha! You did the right thing.

I've done the fast-forward thing on some pretty boring films, though not on this film which I thought was OK.

Which movies do you fast-forward?

Usually really long films like Scarface, The Departed and Heat.

There are some boring parts in all of those, but most of them kept my interest throughout the running time.