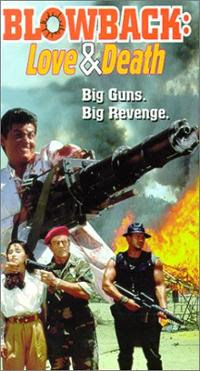 After making off with a stash of money and heading to the Philippines, gangsters Baku, Lopez (Hunt) and Joe (Takeuchi) are ambushed by the supercriminal Yamaneko, or “Wildcat” (Monty). Baku is killed, Lopez disappears and Joe is gravely wounded. He manages to stumble into the restaurant of Rei (Yoshida) and she nurses him back to health.

Once back in fighting shape, his intention is to find Lopez, then find Yamaneko, to get revenge for his fallen partner Baku. Rei gets swept up in this mission, and a mysterious man named Ratts (Sugata) does as well. But it’s not going to be easy, because Yamaneko controls a virtual army of heavily-armed baddies. But Joe forges ahead anyway...is this going to be a good idea?

Guns, guns and more guns! Blowback: Love & Death (or Blowback 2) is perhaps the ultimate non-John Woo “Gun-Fu” film. While influenced by Woo, it seems the major driving force behind this movie was Sergio Leone’s Westerns. Even the black-and-red animated title sequence gets you in a Leone frame of mind. And there are plenty more Leone references along the way. But it all adds up to be an entertaining gangster drama, with an exploding guard tower or two. (It was the Philippines after all, and they don’t let you leave without at least one).

It is nice to see someone besides an American film production utilizing what the Philippines have to offer as far as film backdrops go - in this case it’s the Japanese. Riki Takeuchi makes a very cool anti-hero, and while he has had a long and fruitful career in his native Japan, stateside fans of the work of Takashi Miike and the five movies he puts out a month will recognize Takeuchi from the Dead or Alive series (he was in all three), Fudoh: The New Generation (1996) and Deadly Outlaw Rekka (2002).

With his slicked-back pompadour, sunglasses and open Hawaiian shirts, and brandishing tons of guns, it’s hard to be much cooler. As for director Muroga, this was his first film, and he followed it up with two movies that found their way to American DVD: Score (1995) and Junk (2000). While both of those movies have their moments, Blowback 2 is arguably the more all-around satisfying experience, and a good place to start with Muroga nonetheless.

Muroga certainly succeeds in making Manila and other parts of the Philippines look hot and humid. It seems everyone is sweaty and flushed in this movie. That brings us to the villain of the piece, the fan favorite Mike Monty. Here, he really, really, REALLY looks like largely-hated New York City Mayor Mike Bloomberg. We guess that goes a long way towards bolstering his bad-guy status. He just resembles Bloomberg so closely, it’s a laugh riot: “Oh no, Bloomberg’s on the rampage!” And aside from “Bloomberg” being in this, Blowback 2 offers some nice surprises to keep you on your toes, especially the (yet more Spaghetti Western-inspired) ending.

Asia Shock did a great job with the VHS of Blowback 2. They were one of the few companies releasing subtitled VHS tapes of exploitation cinema.

We’re so used to watching shoddy dubbed versions, this came as a nice surprise. It’s great to see they actually care about the material. That being said, it doesn’t seem like this was one of their more widely distributed titles. Regardless, if what you’ve just read floats your boat, Blowback 2 should be worthwhile viewing.

Can't find anything on the first one (assuming it exists)...

Same here, would love to see the 1st one.