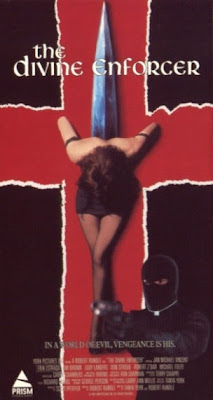 
The Monsignor (Estrada), Father Thomas (Vincent) and their helpful assistant Merna (Landers) live and work at a church in a “bad part” of L.A. One day, a man named Father Daniel (Foley) comes to join their parish. The only thing about Father Daniel is, he’s a Martial Arts expert who uses his Cross-emblazoned gun, knives and even throwing stars to take out the trash of the city. He even uses the confessional for tips on where to go. But if the parishioners don’t give him enough info, he uses his psychic powers to find out more.

While trying to keep his double life secret, he meets a fellow psychic, Kim (Chambers), who he takes a liking to. Meanwhile, there’s a sadistic serial killer stalking the city named Otis (Stroud), who drains his victims of blood and saves their skulls. But Father Daniel saves people’s souls, so the two men are mortal enemies. When Otis kidnaps Kim, the ultimate showdown ensues. Or something like that.

You would think a movie about a psychic priest who kills his enemies with throwing stars with the Cross on them would be a surefire hit. But in the hands of director/co-writer Rundle, this one idea is not enough to sustain a 90 minute movie. Thus there is plenty of filler which dilutes this killer idea. A wise man once said “you cannot intentionally make a cult film” and that seems to be the case here.

Sure, the movie is loaded up with quality B-movie names, but it could definitely be argued that they are not used to their full potential. Add to that some muddy, muffled sound where the music is louder than the dialogue and a lot of repetitive scenes (such as the oft-repeated “Breakfast” scene) and, far from a unique winner, we’re bordering dangerously on dud.

The credits of the movie misspell Erik Estrada’s name (crediting him as “Eric” with a C), while the VHS box (released by Prism) has it correctly. He does more-or-less a “sit-down” role, as does Jan-Michael Vincent, who does an out-and-out sit-down. Vincent just sits at the breakfast table with his newspaper and slurs a few lines. Sure, there’s something endearing about it, but he’s so under-used. And speaking of under-used, Jim Brown and Robert Z’Dar are on screen for literally seconds as incidental drug-dealers. More should have been made of them. Don Stroud plays the deranged killer with aplomb, but his scenes contain the most filler.

Some of the better moments in The Divine Enforcer comes from the random scenes - plenty of parts have no explanation, and that combined with the amateurish acting usually provides the VHS gold we’re always looking for. But it’s a battle against filler. Ken Davitian shows up in an uncredited role as a club owner watching the singer Hiroko (and her stellar backup dancers) do a performance. Her song “My Love’s Waiting” temporarily livens things up, but this movie is still fairly disappointing.

In all, the idea of the Father Daniel character is excellent, but, sadly, the movie as a whole is mishandled, not getting the maximum bang for the buck from the idea.

This movie was a complete let down. When I first read about it, I though Jan-Michael was the Divine Enforcer. I was extremely saddened when I found he was doing absolutely nothing but sitting at a table and reading a paper. With a movie that has actors like Estrada, Vincent, Stoud and Z'Dar, one would think they would have substantial screen time. It's just a piece of garbage.

Totally agree. It definitely needed Vincent in a more prominent role...instead of just sitting down.

It was a waste of time, with only a couple of unintentionally funny scenes with the priest and the throwing stars.