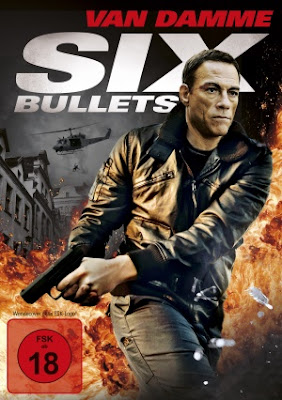 
Andrew Fayden (Flanigan) is an MMA fighter who wants to crack the European fight market before he stages his big comeback. So he does the natural thing anyone might do in that case, he brings his wife Monica (Plowman) and his young daughter Becky (Beaumont) to that hub of sporting and MMA activity, Moldova.

While in Moldova, Becky is “Taken” and the Faydens are distraught - so they reach out to the one and only Samson Gaul (JCVD), An Ex-Mercenary, Ex-Legionnaire Who Is The Best And Whose Methods May Be Unorthodox But He Gets Results. Gaul has been down and out of late, after some complications arose on his last job. He went back to the family business of being a butcher and began drinking heavily. Inspired to do the right thing, he puts his skills to work helping the Fayden family. But will they find Becky in time? Find out today!

We’re very happy and proud to report that 6 Bullets is actually a good movie. Without any other knowledge, at first glance you might think a DTV effort from 2012 shot in Romania with Van Damme, from the director of Assassination Games (2011) called 6 Bullets, might be another piece of modern-day DTV crud. And under normal circumstances you might be forgiven for thinking this, but, somehow, 6 Bullets bucks all the trends and is indeed a solidly-made, worthwhile, entertaining, serious-minded affair that is well worth your time.

Sure, it’s a Taken (2008) knockoff, and a pretty unabashed one, but so what? What the world needs now are tough, take-no-prisoners Taken knockoffs. Not love sweet love. The real crime here is that Taken 2 (2012) went to the theater while 6 Bullets had to settle for being direct to DVD. It should have been the other way around. 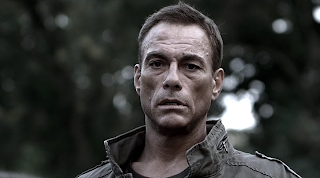 Thank goodness other countries in this world still care about Van Damme. If the whole world were like America, which seems largely uncaring of his career, he would be out of a job. But luckily other markets still care, and Eastern Europe at least still seems to have not lost their taste for action movies.

Yes, we do have to put up with some unnecessary CGI effects at times in 6 Bullets, but that seems to be the way of the world with these newer DTV movies, and in all honesty, at least this time around, it doesn’t detract from the overall experience. This was our first run-in with Joe Flanigan, and we must say he was quite good as one of the awesomest dads ever. That was one of the cool things about 6 Bullets, the mom and the dad take up machine guns, hand-to-hand combat and other violent tactics to help save their daughter.

Thankfully, the wife isn’t a shrill harpy who whines the whole time. Quite the opposite, she gets into the fight with Flanigan and Van Damme and it was great to see that. We were happy to see that particular cliche go away (unlike the Prerequisite Torture, which was, well...prerequisite. Apparently.) 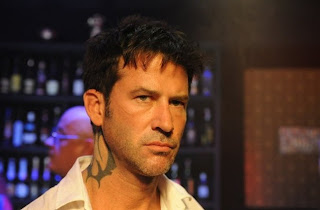 We really enjoyed 6 Bullets and we think you will too. It’s better than you probably think it is, so see it if you get the chance.

Also check out write-ups by our buddies, The Video Vacuum and DTVC!
Posted by Ty at 2.10.13

Thanks for the review. I've had my eye on this one and plan to check it out when I can get my hands on a copy.

I really like Van Damme. I think he's solid. He knows he'll never win an Oscar and people really only want to see him in action roles, which he delivers.

Cool! Looking forward to your opinion. Van Damme usually delivers the goods. This was solid.