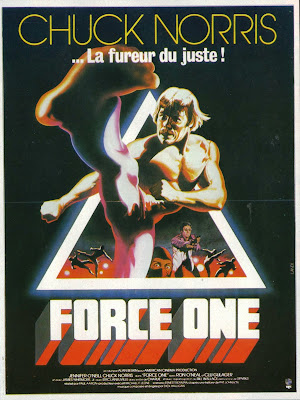 Matt Logan (Chuck) is a Martial Arts expert who runs a dojo, teaching children by day and fighting in the ring by night. His life is consumed by Karate, which is exactly why the San Diego police department seek out his expert counsel. It seems a drug epidemic is on the rise, and the narcotics officers who are trying to stem the tide, including Detectives Mandy Rust (O’Neill) and Rollins (O’Neal) (no relation, heh heh), are in great danger, because a ruthless assassin is out on the streets, ruthlessly killing cops who get too close to the center of the drug operation.

Figuring that the mysterious killer only uses his bare hands, Matt Logan is called in to train the officers in the exotic use of Martial Arts. Soon Logan becomes personally involved and is searching for the killer himself. But what is the true motive of Sparks (Superfoot)? Find out today! Also Matt Logan has a Black son. (Charlie (Laneuville) was apparently adopted, but that explanation was not necessary. They should have left us wondering...)

A Force of One is pretty typical early Chuck: the pace is on the slow side and the man himself is wonderfully emotionless in the lead role. While this PG-rated outing does feel like a TV movie at times, it does provide plenty of Chuck fights and the movie as a whole isn’t bad.

Chuck has some excellent backup in the cast department: Jennifer O’Neill is pleasant as the female cop/love interest, Ron O’Neal is always nice to see, as one of the narcotics cops, the great Bill “Superfoot” Wallace truly stands on his own two feet, and of course Aaron and Mike Norris serve various roles on the production, as is standard procedure for a Chuck venture. Director Paul Aaron later went on to make the Wings Hauser epic Deadly Force (1983), which, after having viewed both films, makes sense. 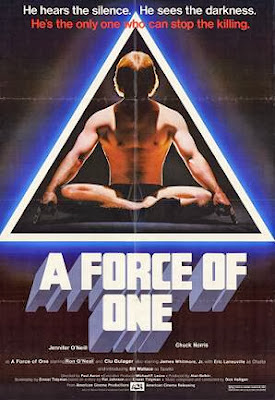 Matt Logan is introduced to his future students on the police force by the Captain saying “This is Matt Logan. He’s a Karate man.” This predating Out For Blood (1992) by many years. He certainly lives up to his standing as a Karate man, what with his impressive, large-scale black and white photos of himself glaring at you on the wall.

He also has some stylish fight pants, as do all the fighters, including Superfoot. During the climactic night fight scene, it’s pretty much all you can see. They must have gotten them at the evil sporting goods store in the movie. It’s too bad we can’t go there now. Their selection of jackets and other items look really cool. It’s also nice to see the 1970’s tech, such as rotary-dial pay phones, and Jennifer O’Neill’s pager, which looks to be the exact size and dimension as a brick.

In all, A Force of One is a decent, harmless, and enjoyable-enough Chuck jaunt.

Never felt the need to watch this, as much as I love me some Chuck. Now I know why. Great review guys!

Thanks! It is not necessary to see every single Chuck. Even we are not going to endure Forest Warrior or Bells Of Innocence.