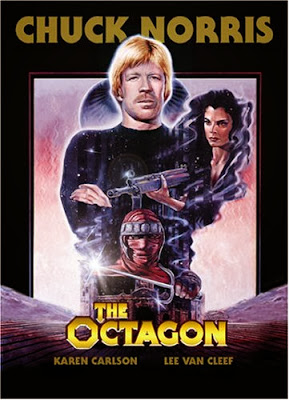 
Scott James (Chuck) is a man who looks spiffy on the outside (he wears a pretty sweet tuxedo) but seems to have a lot of turmoil on the inside. Not only is he constantly flashing back to his childhood and his initial Martial Arts training (the young Scott is played by Mike Norris), but the voices in his head are overpowering and seem to tell him important things. All this is going to come in handy when Scott James faces off against perhaps the ultimate foe: terrorist ninjas. Yes, terrorist ninjas.

While protecting a woman named Justine (Carlson) from said TerNin’s - which he does with the help of mentor McCarn (Van Cleef) - he realizes the true depth of what he’s up against. The nefarious group trains in an octagon-shaped facility, and their organization is named...The Octagon. Will Scott James triumph over these squares? Find out today!

While The Octagon contains no cage fighting, or Punchfighting of any kind, it is in fact a reasonable Chuck movie. It’s not bad, but it’s not great either. By today’s standards, the pace might be too slow for some viewers, and at 104 minutes it’s certainly on the long side. But what else would you expect from director Karson, who later was responsible for Van Damme dud Black Eagle (1988)? But the cast perhaps makes up for it. Besides the aforementioned Norrises, and of course the legendary Lee Van Cleef, we have Tadashi Yamashita of Sword of Heaven (1985) fame, whose hair steals his own performance out from under him.

The great Gerald Okamura has a brief role as a member of The Octagon, as does John Fujioka, and John Barrett does stunts as well as a small role. There’s even a young Ernie Hudson on board as a fighter. As is usual for a Chuck movie, Aaron Norris was stunt coordinator, and besides doing stunts, Richard Norton has a nice appearance as a baddie who gets in a fight with Chuck. 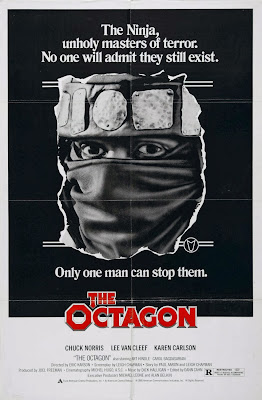 Norton’s hair and mustache combo look awesome, and his blonde bowl haircut is so bright, it actually lights an entire dark scene all on its own. But back to Chuck, this movie definitely belongs to the era in his acting career where his performances were noticeably, obviously wooden. Or, WoodChuck for short. But beyond the fact that this is a WoodChuck movie, at least you can hear his thoughts, which is enlightening. There’s a passing mention that Scott James was a Vietnam vet, and the baddies’ training camp is seems like a dry run for the later American Ninja (1985) - which would also reunite Norton, Yamashita and Fujioka.

The Octagon is competently-made early-80’s Chuck, but better was yet to come.

It's a nice flick and i think it was the one movie that helped Cannon Films to see a future full of ninjas. After one year "Enter The Ninja" came from them with Franco "the stash" Nero as the lead and Ninja Madness was born.

Another classic early Chuck, a little bit slow, yes, but after all, this was the original Octagon, long before UFC. They sure do have a lot of recruits joining the terrorists. I wonder where they get them from?

Was this the first American movie with ninjas? No other springs to mind, except for You Only Live Twice, which was a UK movie.

Snake: Totally agree, Enter the ninja was one of the starters for the ninja boom.

Roger: UFC totally stole this from Chuck! Haha good question about the recruits and the american ninjas...it has to be.