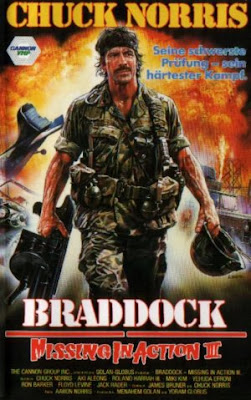 Braddock is back once again in this triumphant end to the trilogy. This time around, Braddock (Chuck, of course) is just trying to live life one day at a time after the end of the war. He’s informed by a kindly priest, Rev. Polanski (Efroni) that his wife Lin (Kim), who is Vietnamese, is still alive there. After all these years, he thought she was dead. So he travels back to ‘Nam to reunite with her. He also finally sees his 12 year old son Van (Harrah). Ruining the emotional moment, there’s yet another sadistic Vietnamese General, Gen. Quoc (Aleong). He hates Braddock - and also children - so Braddock has to not just get out of the country, but bring an entire orphanage along with him! Can Braddock do it?

To us, this third and final installment in the Braddock trilogy is clearly the best. It’s funnier, looser, weirder, and has a different vibe from the previous two films. Possibly due to the fact that it was made three years after the second movie and this time it’s directed by Aaron Norris. Because it, honestly, didn’t really have to be made, it has kind of an “Eh, screw it” kind of vibe and they just threw everything at the wall to see what sticks. Luckily, this approach is totally winning.

Everything, perhaps in spite of itself, seems to work here: Braddock showing his sensitive side, the especially dark Prerequisite Torture, the fact that Braddock’s son calls him “Braddock”, the fact that Gen. Quoc is constantly screaming “Braddock!!!!!”, the Patton (1970)-like musical stings, Braddock’s awesomely awesome “Supergun”, and many more excellent moments.

All three movies had quality explosions, and this one doesn’t disappoint in the blow-ups department either. Matching that are some top-notch neck snaps as well. The whole movie is loaded with that classic 80’s violence/silliness/patriotism mix that’s the hallmark of the Golden Age of video-store action movies of the day. It’s incredibly addictive once you get into them (and since you’re reading this site, we assume you also have got the bug, and we thank you). 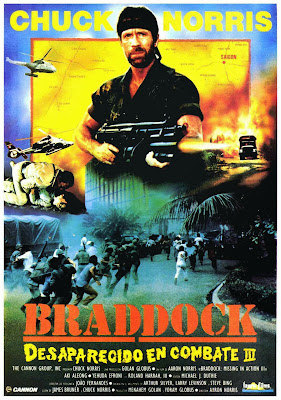 Besides all the onscreen action, some of the dialogue is priceless too. Most outstanding, of course, is the super-quotable “I don’t step on toes...I step on necks” line, which Braddock actually lives up to later in the movie. The music by Ron Bloom and Lenny McDonald adds a lot, and their Bruce Springsteen-meets-Warren Zevon songs add another layer of icing for the wedding cake of radness that is Braddock.

Also adding to the list of Braddock firsts, this is the first of the three to be released on the Media label. You have to buy this movie on VHS for one very simple reason: there is an amazing commercial on the tape for Braddock merchandise. You can get Braddock hats, T-shirts and sweatshirts. This commercial alone makes the tape worth buying.

We love this movie for some very personal reasons. It’s the first Braddock movie we all saw, and we rented it from our local video store back in the 90’s. As a group of friends, we watched the movie, and two things of note happened: we misheard the song lyrics in the beginning, and we imagined the ultra-gruff vocalist sang: “In the streets of Saigon, when my ass was king”. So we continue to quote that (plus you can‘t deny it’s true in Chuck’s case - we just thought the singer was being a bit on the nose) to this day. And, somehow, another song was crafted. Sung to the tune of “Don’t Cry For Me Argentina” came: “Don’t cry for me Col. Braddock, I know that you’re missing in action.” (Thanks Ant).  So clearly we have a strong personal connection to this fine film that you might not have. But that’s the genius of Braddock. He inspires creativity. There may be a heavy metal CD in the works that’s a concept album all about Braddock. It truly never ends.

Nevertheless, this, the best of the Braddock movies, represents a fine end to the trilogy. It’s highly rare that sequels get BETTER as they go along, yet the Braddock movies get absolutely no credit for bucking that trend. It might be the only trilogy in movie history to improve as it goes along, but do you ever hear anyone say that? No, of course not. So take a trip to the Philippines and watch Braddock work his magic, one more time.

Also check out a write-up by our friends at Ruthless Reviews!
Posted by Ty at 22.11.13

Oh right!, it did win. The ultra-gruff vocalist came up to podium and sang it live after he collected his well-deserved award.

I don't know if you get paid to run this blog or if you do it just for the love of the genre, but I have to let you know how incredibly fantastic I think it is.

I thought I had a decent mental repertoire of useless factoids about action movies, but this site is my Holy Grail. I visit the site regularly.

Your enthusiasm for the subject is practically unrivaled. I cherish the memories of going to the local video store as a kid and unearthing some poorly made (albeit highly entertaining) action movie.

I don't consider action movies a guilty pleasure as much as just a part of me.

Thanks for giving people like me an avenue to share my love of such cinematic "classics" and discover other titles I had never heard of.

A thousand kudos to you, good sir.

Thank You! We truly, truly appreciate your awesomely kind words. We do indeed do this for the love of the genre.

And when we get comments like yours, it honestly makes it all worthwhile. It's good to know that there are kindred spirits out there and that video store memories are alive and well.

We don't consider action movies a "guilty pleasure" either, they're just a pleasure to watch.

This is a truly awesome movie. Sadly, Roland Harrah III committed suicide in 1995. Ron Bloom went on to write songs for movies like Beach Babes 2 and Petticoat Planet. James Bruner never wrote another action movie. I guess it's all downhill after taking part in a classic like Braddock. I completely agree with Joe Armstrong's assessment of your blog. It is the movie site I use the most, beating the imdb. You also have a great bunch of commentators. I especially like Jack Thursby's comments, whose blog I also follow.

That says it all about MIA 3.

As for your blog, Ty, i agree with Joe.

Roger: We are truly flattered that we are up there with IMDB for you. You keep reading and commenting, and we'll keep posting! We got some fun stuff planned for 2014.

I thought it was fantastic when they murdered Braddock's wife right in front of him, therefore depriving the movie of a perfect ending.