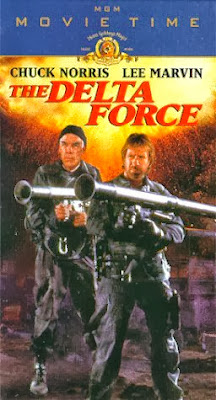 
When a group of evil terrorists (is there any other kind?) led by Abdul Rafai (the interestingly-cast Forster), hijack an airplane and start making demands, there’s only one group of men that can stop the madness...The Delta Force! And who is the elite of the elite, there is no question: American Superdude Major Scott McCoy (Norris) who will get the job done with his bare hands if necessary. He came out of retirement just to kill bad guys and rescue hostages. Those baddies better watch out.

This was a huge hit for Cannon and really put them on the map. The stellar cast is literally all-star, and the two hour-plus running time must accommodate that. But that gives the movie a big, Hollywood feel.  The first half of the movie is surprisingly powerful and intense. It tries to put a human face on the victims of terror, and the old guard of Hollywood actors such as Martin Balsam, Shelley Winters and Joey Bishop help to convey this, as do George Kennedy in another role as a priest, and an actress most people know from the films of Fassbinder, Hanna Schygulla. Bo Svenson shows up as the pilot, and he’s always nice to see. 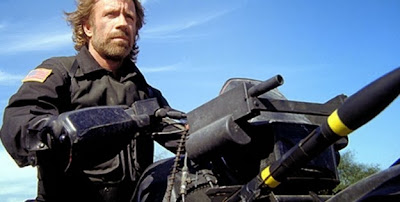 Then the Delta Force shows up, led by Lee Marvin, and featuring not just Chuck, but the underrated Steve James, and Robert Vaughn as a General. The action begins in earnest about halfway through the movie and it doesn’t disappoint, especially Chuck’s motorcycle with missile launchers built in. This thing is possibly the most awesome thing ever. Chuck will stop at nothing to find and kill all the terrorists involved, and maybe a few who weren’t involved. Some of the Chuck stuff is amusing, and the fruit cart chases and shooting help that. 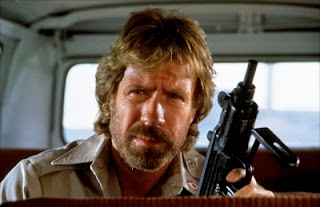 Luckily, the movie is written and directed in a way that all makes sense, even if it is a bit on the long side, and director Golan tried to do pretty much the same thing but on a smaller scale with Deadly Heroes. But that movie really ramps up the silliness factor.

For a drama (1st half) and action extravaganza (2nd half) that’s a bit more well-known, The Delta Force fits the bill very well, and the plot is still very relevant today.

Also check out a write-up by our buddies at Ruthless Reviews!
Posted by Ty at 25.11.13

If I have the right film here then this'll be the one with the silly rockets on handlebars thing. My wife and I thought that was hilarious for some reason and spent the next half hour or so making jokes at the expense of the film. Not quite a ridiculous as Invasion USA and the rocket launcher duel between Chuck and Lynch though ;)

You're right, this has the rocket handlebars. Haha. That must have been a hilarious back and forth with your wife.

Hard to beat Invasion USA, but this had a ton of fun and ridiculous moments.

I still think the film would have been much better if it was just 95 minutes or so of Chuck Norris, Lee Marvin and Steve James offing bad guys without the 70's disaster movie stuff. Good review, though.

Great movie and the music theme stucks in your head!

Also i think it worths the time to note that Cannon took a real life event of the TWA Flight 847, changed it and made it a action extravaganza.

Finally the movie was panned in Greece by some people because they believed that the highjack was set on purpose in Greece to make the country look bad. The funny part is that the real TWA flight was highjacked in Athens airport.

Anyway their theory is silly but what you can expect from stupid extreme left and extreme right people. Funny thing that they agreed on their view about the movie, haha.

This is a good movie, although overlong. The second Delta Force had more bang for your buck.

Ed: Totally agree, its just a bit too long.

Roger: Enjoyed the 2nd one, but that had some flaws too. Drago was solid though.

And with a small role Liam Neeson in it.

That's cool he's in it! We tried to find him.

Sorry guys, i was doing a little maintenance in a friend's blog and i posted with the Cryptkeeper nickname.

Snake goes away humming the tune of Delta Force.

No problem! The theme is great too.

Thanks for the clip. Blink and you'll miss it part.

This has the best opening scene of any film ever made.....

One of the best. Plus you have to love the rocket launcher mototcycles. How do they think of these awesome ideas?

I think they got the missile motorbike idea from G.I Joe the cartoon. If you want a out of this world army vehicle look what the G.I Joe's or the Cobras drive!

Haha! They stole from the best.