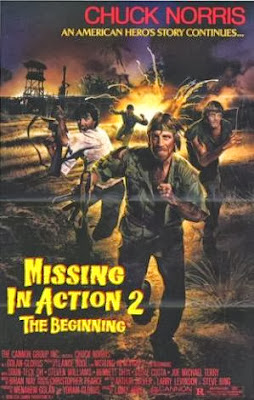 We all know Braddock was Missing In Action (1984). But this sequel - actually a prequel - fills us in on just what went on in the brutal prison camp he was imprisoned in. Braddock and his fellow soldiers are routinely tortured and subjected to harsh, cruel, and sadistic practices, thanks to maniacal commander, Col. Yin (Oh) and his sidekick Lao (Tanaka). Will Braddock escape to see freedom? (Actually, you know he will, because this is a prequel, but just ignore that).

The fans clamored for more Braddock, and more Braddock is what they got with this sequel/prequel. Cannon provided more jungle action and Prerequisite Torture with that trademark Reagan-style patriotism that we’ve all come to know and love.

There’s even stock footage of Reagan in the actual movie. It could definitely be argued that this sequel is superior to the original, because the plot is more streamlined, and the final fight between Chuck and Soon-Tek Oh absolutely delivers the goods. The movie primarily takes place in one location - the prison camp - and you see their travails, everything from Punchfighting to dealing with Professor Toru Tanaka. He’s a fan favorite and his presence improves the proceedings. 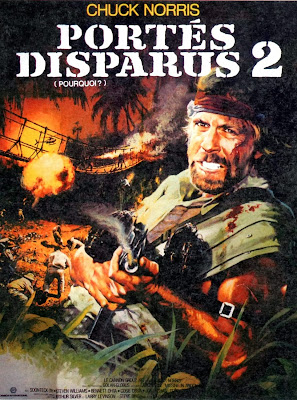 Like the first film, you kind of have to wait for any substantial action, but when it comes, it’s a true crowd pleaser. Adding to this, you get to see the origin of Chuck’s beard. When he was first captured in 1972, he did not have a beard. But he had to grow one in captivity because Col. Yin did not provide razors. Apparently, he liked the way he looked, so he kept it. Because of Chuck’s long hair and beard, and the way he’s treated, in Missing In Action 2: The Beginning there are certainly some parallels to the story of Jesus. Think about it. 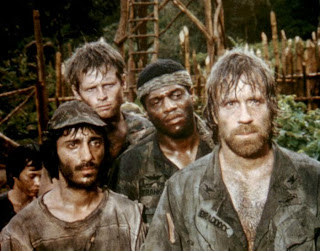 Director Lance Hool, who was credited with writing and producing credits on the first film, here steps into the director’s chair with successful results. He obviously understands the Braddock character and that’s probably why he got the gig. Once again Aaron Norris is on board for stunt work, as is fan favorite John Barrett. Dean Ferrandini, usually part of the stunt team, here steps in front of the camera in the role of Kirtle. It appears everyone knew what they were doing and did their best to expand the story of Braddock, and it certainly worked.

It was released in one of those cool MGM/Cannon silver big boxes, so the collectability factor is high. But the movie is definitely worth seeing, as is the first one. But the highest heights of Braddock were yet to come: the final installment of the trilogy was still three years away.

No wonder Cannon decided to release this movie as the second in the series. It is inferior to the other MIA movie filmed at the same time, but still a good movie. The series took a step up from this with the following MIA 3.

Totally agree with your comment. MIA 3 helped the series find it's footing again.