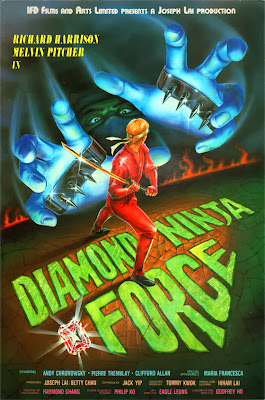 
Ninja Master Gordon (Harrison) is a cool dude who just wants to go around Hong Kong taking pictures of his girlfriend Lori (Francesca). But oh no. When an excavation on a building site reveals some bones and human remains, naturally a sinister gang of evil ninjas called the Black Ninja Clan see this as an opening to reassert their dominance, which they believe has only been impeded by good ninjas, called the Diamond Ninja Force.

When members of the Black Ninja Clan murder Lori, Gordon dons his red ninja outfit and starts getting revenge one by one. Meanwhile, a family consisting of a father named George, a mother named Fanny and a son named Bobo move into a house. Because the house’s original owner had some connection to the site where the bones were discovered, all manner of scary trickery is employed to frighten the family. Will the Black Ninja Clan end up ruling the world as they so desperately want? Will Bobo and his family ever move out of the haunted house? Will Gordon get revenge? All questions should be answered by the DIAMOND NINJA FORCE...

It’s another work of genius (????) by the master of nonsensical entertainment, Godfrey Ho. We keep going back to Ho’s work because his movies, if nothing else, are original. No one else in the world makes movies like him. He provides a unique form of entertainment that only he seems to understand.

Once you get used to his filmmaking style, you want more. Much like how, with Pringles potato chips, once you pop, you can’t stop, here it’s once you Ho, you can’t...go? Well anyway you get the idea. Diamond Ninja Force is more silly fun, with all the loud, crazy dubbing, and nutty goings-on that we’ve all come to know and love. Do the people reading the dubbed dialogue think it makes sense? Or do they know it’s crazy? Do lines like “There are no such things as ghosts. Only ghost ninjas” seem at all normal to anyone? Regardless, we should be happy no one raised any objections, because if it’s zany entertainment you seek, look no further. 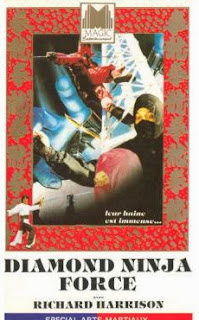 Much like how Ninja Brothers of Blood (1988) was one-half ninja outing and one-half romantic drama, here we half a half-and-half combo of ninja-based revenge and Poltergeist (1982) or Amityville Horror (1979)-inspired supernatural haunted house hoo-hah. Harrison’s enemies during his plotline are great. There’s nothing more intimidating than a tubby Caucasian “ninja” prancing about on roller skates. Every single time Harrison dispatches one of the baddies, he pulls down the piece of cloth on his mask that covers the lower half of his nose and his mouth.

Every time. Even after he has killed many people. Are we supposed to still be surprised it was him? Or maybe he’s just trying to show that his mustache has, and always will have, dominance over theirs. Also you know Harrison is going into “ninja revenge mode” when he puts on guy-liner. So we can see his eyes are all done up anyway.

Other people out there have mentioned Harrison’s Garfield phone, but it’s so cool: when the receiver is off the hook, his eyes open, and when the receiver is put back, they close again! Though it is somewhat incongruous when Harrison says angry threats using part of Garfield to relay the message. When he says, using the Garfield phone, “you’re on my death list”, does that mean he’s going to kick them off the table like Garfield did to Odie?

On the soundtrack front, there are more wonderfully blatant steals from popular songs - this time around musical cues are stolen from The Who’s “Who Are You” and Kraftwerk’s “Trans Europe Express”.  When the opening bars to what you think are these songs start playing either while Harrison is ninja-ing it up or a family is dealing with a haunted house, you know you’re dealing with something special.

While some prints are said to have an unrelated Sho Kosugi opening, many don’t. The version titled Ghost Ninja certainly doesn’t. Even though he was top billed on the artwork, we can safely say he was a no-Sho. We were disappointed, so avoid the version by that title.

But even without the Sho intro, the movie does get off to a pumped-up opening, and takes you on another ridiculous ride as only Godfrey Ho can. Whether that’s your cup of tea, only you can judge. But if you’re anti-Ho, you’re missing out, as far as we’re concerned.

While I would never have the patience to sit through a Ho flick from all I’ve read, your synopsis paints such a vivid picture that it’s unnecessary for me to do so anyway.

I have to ask one question, though: Do you own, rent or borrow these movies? If you owned them, your collection would be immense.

And finally, I leave you with this thought: Just because you don’t see ninjas on your way home doesn’t mean they aren’t there; it just means they are doing their job.

Thanks for the nice comments. We're happy it made you laugh.

It's a mixture of own and rent. We have a solid collection though.

Haha, that's true...Ninjas are always lurking in the shadows. Lol.