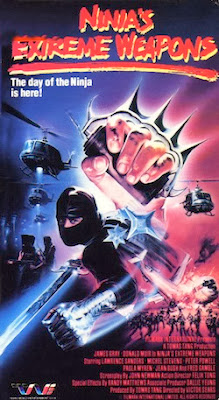 Boss Pierce is an angry, wheelchair-bound drug lord who has made millions on his illegal trade. Doubtless his ace in the hole is that he employs two ninjas, naturally named Claude and Brian, to do his bidding. When a cool dude named James comes along to try to take down the baddies, he tries to enlist the pretty Nancy to help him in his quest, but her brother Steven, who dresses in stylish bathrobes and has a commanding mustache, is against the idea. Meanwhile, James becomes romantically interested in a woman named Angela, but her motives are suspect.

But the Boss Pierce ninja gang has their hands full with a “Blue Ninja” who keeps foiling all their plans. Then another underworld figure named Boss Brown comes on the scene. But maybe Boss Pierce can end all this madness with his magical “Ninja Ring”? Get ready for another round of confusion as only Godfrey Ho can weave...

Godfrey Ho’s eighteenth movie of 1988 (that’s not a joke - it’s actually true), Ninja’s Extreme Weapons has all of his trademarks: a cut-and-paste style that is largely nonsensical to viewers (at least viewers seeking rational, linear entertainment, and if you were one of those, you wouldn’t even know who Godfrey Ho was, much less be watching one of his movies), loud dubbing with abrasive, phony-sounding British accents, and ninjas, ninjas, ninjas. The movie might not make any sense, but it doesn’t skimp on the ninja action.

The 80’s Ninja Boom that occurred in video stores that we’re always talking about was largely driven by Mr. Ho and his prodigious output. It seems that even in his most confounding films, there’s always something new and cool in the ninja department that we haven’t seen before. And here is no exception.

Outside of the normal high-jumping white guys, disappearing ninjas, swordplay, throwing stars and the like, we also get treated to “ninja massage” and so much more.

As for James, the poor man has to go through the entire movie with just about every other character constantly criticizing his “playboy” status. That must make you quite the pariah in Hong Kong. He even laments at one point, “Some people judge me for being a playboy, but I get the job done”. And how could he not fall for Angela, what with her prominently-placed “bowtie bear” on her couch? It’s no rival to the Garfield phone, but it’s something. Sure, it’s all very silly and wacky, but you knew that going in, didn’t you?

As is usually the case in Godfrey Ho-land, the characters wear some very cool clothing, with some very out-there patterns. And the wallpaper is the same. At one point, someone with a large-collared, wild-patterned shirt is standing in front of a wall with a very similar pattern (which by today’s standards might be called an “eyesore” but we beg to differ) and he looks like a floating head.

There’s a great scene in a club with a live band that’s playing music completely different from what we hear on the soundtrack. The discrepancy is so obvious, it’s really funny. There are plenty more off-the-wall moments but we don’t want to spoil them for you. But even a movie as off-kilter as this falls prey to a common pitfall: it slows WAY down before the climax. Usually Ho gives us a “Final Field Fight” and here is no exception. And you have to love those stop-on-a-dime endings.

Fans of Godfrey Ho and cinematic wackiness will love Ninja’s Extreme Weapons; snobs and people with no sense of fun will not. And check out that killer box art!

I need to ask, there's a lot of helicopters on the cover of this film. Do any of them explode?

Thanks! Happy you're enjoying it. Unfortunately, no helicopters explode in this.

I can't help but wish there was some kind of extreme Godfrey Ho ninja box set out there that collected all of these.