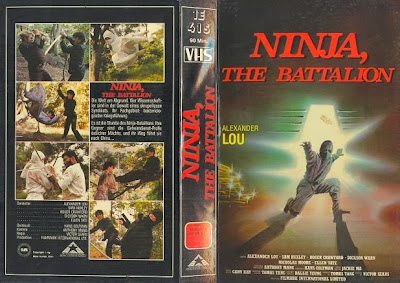 
Four Chinese scientists that are experts in germ warfare have been kidnapped by the evil Japanese, headed by a man named Nakamura. He’s using his Mitsui Company as a cover for Japanese agents and espionage in Shanghai, China. A man named Ken Yong, who introduces himself to new people he meets by saying he’s the “number one secret agent!” is on the case. He’s also a snappy dresser, never without a fedora and bow tie. Yong gets his two best agents, a man named Alex (presumably Alexander Lou) and his partner, a blonde Westerner named Steven, to unravel what’s going on and save the scientists.

But it’s going to prove complicated (very, very complicated) because the Russians are involved, as well as an all-female mercenary group known as The Tigresses, and naturally the way to settle the disputes of all involved, in the interest of international negotiations, is ninja, ninja, ninja! Watch in amazement as the indefatigable Godfrey Ho churns out another mishmash of entertainment...

Somehow, we never get tired of the works of Godfrey Ho. Just as he himself never gets tired of creating them. They have an unorthodox, demented style all their own. And TransWorld entertainment never seemed to tire of releasing them to video stores during the 80’s Ninja Boom. So we’ll just keep talking about them until we run out of Ninja Boom movies to talk about (which will be never).

Ninja: The Battalion features all the impressive physical feats and completely absurd dubbing we’ve come to know and love. The movie’s insistence on anglicizing all the names certainly adds to the ridiculousness: not only was it directed by “Victor Sears”, but the head of the Tigresses is named “Ruth Brooks”, they kidnap a man named “Jimmy”, and a dude named “Clay” is head of one of the espionage groups. Who did they think they were fooling? But it all adds to the fun.

It has some great opening freeze frames (yes, more than one). We’re always talking about how much we love when people walk away coolly from an explosion, preferably in slow motion and/or while wearing sunglasses (bonus points if they’re smoking). What never gets discussed are freeze-frame explosions. “Victor Sears” tries to set the record straight.

The movie has some of the other time-honored moments we always see: the disco scene, the Prerequisite Torture, the fights in the woods, and, because Godfrey Ho is the director, his classic Final Field Fight. He also makes sure to include his crawling ninjas, as well as his ninjas that defy the laws of physics and gravity, which spice things up and make everything fun to watch. The plot strand that involved The Tigresses was one of the more interesting ones in this Gordian Knot, and anytime they were on screen, things seemed to pick up.

Further weirdness ensues, as if more was necessary, when characters communicate via hand symbols while a song that sounds a lot like “New York Groove” plays repeatedly on the soundtrack. But if you didn’t want nonsensical weirdness, you wouldn’t be watching this in the first place.

Godfrey Ho is the master of turning cinematic nonsense into an art, and his movies, once you get into their singular style, become addictive. Though it may seem counterintuitive, we look forward to the next one.