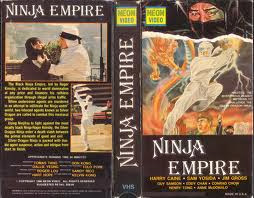 Heaven help us all, it’s Godfrey Ho time once again. In this nutty, wacky, nonsensical ninja outing, an evil baddie named Morris is using ninjas to smuggle Russian arms to the Middle East. You have a better way? But when two Hong Kong businessmen named Mr. Wong and Mr. Chan begin vying  for the arms-trading deal with the Arabs, and a Korean assassin named Burt enters the picture, things quickly spiral out of control. Come to think of it, things were never in control in the first place.

Knowing the full volatility of the situation, a Sgt. Glenn sends a man code named “Condor” (though it sounds like they call him “Condo” which would indeed confuse anyone who heard it) to HK to meet up with a woman named Christine, code named Yellow Bird. Together, the two crimefighters do their darndest to stamp out arms deals, nefarious ninjas, and other world ills. Can they do it?

All of Godfrey Ho’s (or as he is known this time around, “Bruce Lambert”) trademarks are once again on display here: dubbing that does more harm than good, a confusing patchwork of different movies/plots/characters, funny abrupt cuts, and more silliness and absurdity than you can shake a ninja stick at. Truly this type of cinema is not for everyone - heck, we’re not entirely sure it’s for us - but fans should be comforted that there is no deviation whatsoever from the formula that they know and love.

The opening credits alone provide some laffs, what with the computer-generated title “Ninja Empire” appearing on an out-of-place black screen looking awkward, along with a bunch of seemingly misspelled names in the credits such as “Joff” and “Duncean”. So far, so ridiculous. But there are minimal ninjas in this one. Whether that’s a good thing or a bad thing is a matter of interpretation, but the movie is called Ninja Empire. No Ninja Empire is ever actually seen, but maybe it’s an allusion to the Ninja Empire in our minds, hearts and souls. Hey, if I don’t stretch, who will?

But there are some excellent “ninja transformations”, when people magically go from their street clothes to their ninja duds, and a ninja walks upside down on monkey bars using only his feet. So what ninja goods we get are noteworthy. But there should have been more of them.

But because of the dearth of ninjas, it’s easy to forget this one. Outside of what we just mentioned, nothing really stands out. Besides footage of an airplane landing matched with sound effects sounding like a teapot whistling. This teapot airplane, or “Teaplane” will surely be studied by sound effects students and aviation fanatics for years to come.

And at 78 minutes, Ninja Empire is a decent return on your time investment, but know you’re getting into something pretty inconsequential. As long as that doesn’t bother you, there is some fun to be had with Ninja Empire.