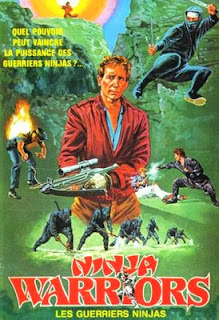 One-man wrecking crew and national treasure/hero Ron Marchini returns! This time he’s in the Philippines fighting ninjas. There’s some sort of secret scientific formula, and the baddies want it to take over the world. Lt. Kevin Washington (Vance), naturally, suspects ninjas are involved, so he goes to his friend Steve (Marchini) because he studied Martial Arts in Japan and is familiar with the ways of the ninja. Soon, bands of black-pajama’d assassins are tumbling around attempting to kill Steve. While Captain Henry Marlowe (Monty) doesn’t understand or approve (they never seem to, do they?), Steve realizes that in order to defeat the ninja, he must become the ninja. Who will be victorious - the ninja...or Steve?

Chalk up another winner for Marchini. Ninja Warriors is a ton of fun, with killer music, lots of ninja action, funny dubbing, and an almost-nonexistent plot that plays out like a slightly more coherent Godfrey Ho film. In many so-called “ninja” movies, the ninjas themselves don’t do very much. Not so here. The ninjas are all over the place, rolling underground like Bugs Bunny (one of our favorite ninja moves), wearing gas masks, throwing stars and ball bearings, digging holes, jumping out of trees and so much more. You definitely get a lot of bang for your ninja buck, and with the mandate to make a ninja movie, director Lloyd went all out, thus ensuring that Ninja Warriors is at the top of the 80’s Ninja Boom pack. 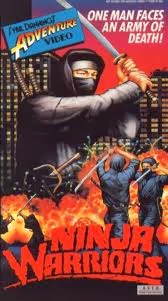 Plus there are a lot of other little winning details, such as the same framed picture of Ronald Reagan that is in EVERY office building, regardless of where it is...it’s so prominent, it could have been credited as having a supporting role. Mike Monty even picks it up at one point to check it for ninja booby traps! Nick Nicholson’s beard/mustache looks extra-evil here, and there’s a drunk guy who sings the most amazingly soulful version of “Happy Birthday” ever committed to film. And lest we forget Ronald L. Marchini’s wardrobe, featuring the greatest shorts known to man. All these little bits make Ninja Warriors a winning addition to anyone’s collection.

Apparently this was part of the “Sybil Danning’s Adventure Video” series, but ours did not have the Danning intro/outro, sadly. If you do pick up the VHS, try and make sure that’s included, but we’re not sure how to ensure that. Nevertheless, Ninja Warriors is a gem. Let said warriors cartwheel their way into your heart.

P.S. when are you going to review the film's I sent you? I'd love to hear your thoughts on Hired To Kill and Fire With Fire.

Cool. How is Rush? We're definitely posting Hired To Kill soon...we have a couple themes for January\February first. March for sure. Fire With Fire is not going to be reviewed on the site...decent movie though. Needed more Willis.

Haven't gotten around to seeing it yet.

What are the themes BTW?

We are doing all sequel February (and starting in late Janurary) Bloodsport 3, Black Cobra 2, and more!