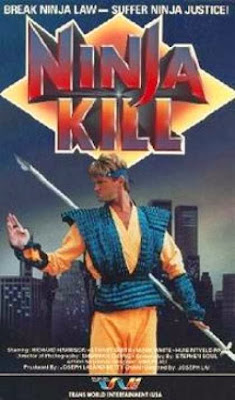 
It’s Godfrey Ho ninja time once again...and while Ninja Kill is technically credited to Joseph Lai, the mark of Ho reigns supreme for all to witness and behold. In this particular pajama’d jaunt, Ninja Master Gordon (Harrison in his usual role in these things) takes it upon himself to stop some planned political assassinations in Thailand. Of course, said assassinations are done by ninjas, so ol’ Gordy must, in his words, “Kill the ninja killers!”

On the ninjas’ hit list are a senator Lam from Thailand, plus two people named Springfield and Ryan. And as far as we can tell, that is not the name of an 80’s sitcom. Helping out NMG is a special agent named David. While working undercover as a farmer for some reason (maybe it’s just fun) David meets and falls for a girl named Rose. Romance aside, who is the real villain? Is it token White-guy ninja named Stuart (as all decent ninjas are), is it a man named Cuba, or could it be a mysterious mayoral candidate known only as “Miss Littleton”? If you’re not puzzled enough already, check it out today!

Ah, Godfrey Ho, where would the 80’s Ninja Boom be without his tireless efforts? He was integral to the Ninja Boom, and for proof, look no further than the killer big box VHS from TransWorld Entertainment. How could you resist it? It’s big, bold, brash, in your face, and extra ninja-y.

Now imagine a whole shelf full of these bad boys. Oh yeah. If you’re familiar with other Godfrey Ho movies, you’ll recognize the cut-and-splice style, making plot and characters nigh-on impossible to decipher. One minute, an (interestingly mustache-less) Harrison is talking to an Oates lookalike named Pedro (of all things), then the next minute in the other plot (there’s usually at least two: ninja and non-ninja. Whether or not they fit together is incidental) David is talking to his buddy Mickey, a superstitious guy who wears “spirit tags” and something called a Soul Vest. Of course, David didn’t even want to take on the assignment in the first place, whining to NMG, “I don’t even know where Thailand is!”

Presumably he’s from Hong Kong, even though women are named Miss Littleton, places are called things like Wakefield Alley, and, dubbing-wise, people speak a deafening and upsetting version of English.

This one has more car chases and gun-shooting than a lot of its ninja brethren, but there’s plenty of filler and it gets boring periodically. But on the bright side, there’s the prerequisite Final Field Fight, sax on the soundtrack, and NMG wears a purple outfit this time and fights the baddies with cymbals. Cymbals. They always seem to give him one different ninja novelty per film, but there’s been so many over the years. Now he’s fighting off assailants with percussion. What’s next, a cowbell? Hopefully.

As they have done in the past, the Lai/Ho team (not to be confused with Alexi Laiho) outright steal Kraftwerk’s Trans Europe Express and use it for background music. It makes about as much sense as anything else you’ll see or hear, like a pudgy blonde ninja with a long blonde beard. And finally, the headbands are out in force, informing us, the delightfully confused viewer, that a “ninja” is battling a “nin -- ja”. Classic.

If you just can’t get enough ninja madness, Ninja Kill will always be here for you.