By day, Ninja Master Gordon Anderson - which is actually his credit (Harrison, of course) - runs an Interpol division of agents who chase down and arrest forgers. He even wears a slick white jacket while doing so. By later in the day, Gordon puts on his camouflage ninja outfit and takes down the forgers the classic ninja way.

The team thinks they’re doing a great job, little realizing that the ninja cleansing the town of forgers is really their boss. In the spliced-in subplot, a guy named Warren is pursuing a modeling career, but his affair with the head of the modeling agency is destroying his relationship with a woman named Judy. There’s a chance a woman named Susan is involved in the forgery ring and posing as a higher-up in the modeling agency.

But we’re not entirely sure, because here’s where things really start to get confusing: the main villain of the piece appears to be a bearded White guy in a red ninja suit named Lead Villain Bruce (Bowles), and how he fits into all this is unclear. Then the jumble begins. Naturally the only thing that can set things straight is a good old fashioned ninja battle. Is there anything a good old fashioned ninja battle can’t solve? Find out today...

Ninja Protector, or Ninja THE Protector, or THE Ninja Protector, or Project Ninja Daredevils, or whatever ninja-based title happens to be slapped on, is certainly the shortest Godfrey Ho outing we’ve seen to date, clocking in at a mere 68 minutes. Perhaps due to the constant chopping and slicing throughout his career, sometimes a shorter piece is left over, kind of like how sometimes after a pizza is divided with a pizza cutter, there’s a really skinny sliver of a slice left.

That being said, Ninja Protector feels longer than its stated running time. Everything gets started on an up note however, with a jaunty instrumental theme song that sounds like it belongs on an early-80’s game show. At any moment during the credits, you think a voice will suddenly say, “and now your host, Peter Tomarken!!” 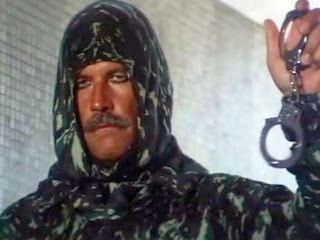 Sadly, Tomarken is nowhere to be seen (though an abrasively-overdubbed Tomarken doing ninja moves and swordfights would be mind-bogglingly awesome) but in his place we do have the legendary Richard Harrison. He probably shot about two films’ worth of footage for Mr. Ho, but has appeared in like ninety. From whatever source it may have come from, we do get (only) one rather extended scene of a shirtless Harrison flexing while holding a sword. And this is towards the end of the movie when his ninja credentials have been firmly established. It’s just so gratuitous it’s really funny.

Here’s another important lesson we learned from NMGA: No guyliner = normal everyday dude. Guyliner = ninja master. Why guyliner is an integral part of the ninja transformation we do not yet know.

But maybe it plays in to the fact that NMGA has to keep not just his secret identity under wraps, but the entire concept of ninjas as well. After a ninja tells a not-too-bright and pudgy man named Andy (Chworowsky) the classic line “only a ninja can defeat a ninja”, Andy’s response is “what’s a ninja?” - and after continually asking what ninjas are, NMGA has to convince him that they’re nothing more than the stuff of legend, presumably to maintain his job security.

In the end, Ninja Protector is incoherent ninja nonsense of the type that only Mr. Ho can provide. Either his wacky style appeals to you or it doesn’t. Regardless, if you’re thinking about watching one of his movies for the first time, don’t start here. Try Clash of the Ninjas (1986) instead.

Merry Christmas, Ty and Brett! This is one of the few Ho movies I have seen. The US version, which I watched, was edited from 92 to 67 minutes, and is available in most of the low-price martial arts movie box sets. Pretty silly, with ninja footage edited into what looks like a drama movie. For a better ninja movie, and more ninja silliness, check out the Swedish movie Ninja Mission.

Merry Christmas to you too, Roger! Thanks for supporting the site. We really appreciate it. Got some fun stuff planned for 2014.

Always wanted to see Ninja Mission. Hard to get the uncut version.

I haven't seen many Ho movies.

That's understandable. Haha. Clash Of The Ninjas is his best work.

Merry Christmas to you too!