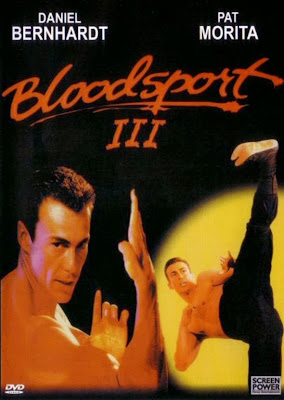 Alex Cardo (Bernhardt) is a Punchfighter, but he’d rather be having tender heart-to-heart talks with his classically 90’s son Jason (David Schatz). While he trains his tot in the ways of Martial Arts, he regales him with stories of the time he won the Kumite (thus eliminating any sense of suspense or drama and telegraphing a spoiler alert from the get-go). Alex recounts the tale of his time in “the Far East” when he used to frequent casinos while dressed in a white tuxedo. Jason, clearly riveted, continues to listen. Alex tells of the evil fight promoter Duvalier (Rhys-Davies), and how he murdered his mentor Master Sun (Hong). He neglects to mention why Pat Morita is only seen for about 30 seconds and for no apparent reason.

To win the tournament, Alex goes to the countryside and begins training extensively, which is a prerequisite if you want to win. Alex soon dons his singlet and enters the ring, and proceeds to work his way through a bunch of fighters with no character development beyond their names, such as Bruce Burly (McElroy) (though why J. J. Perry had to play a guy named J. J. Tucker remains unexplained). Finally he faces off against The Beast (Oleson), an almost comically oversized meathead of the highest order. Will Alex live to tell the tale to his son? Well, yeah, of course he will.

Grown men punching and kicking each other. It can take on many wondrous and colorful forms. Apparently there’s no real limit on how many of these types of movies can be made. The original Bloodsport and Kickboxer films truly opened the floodgates during the video store era for Punchfighters for decades to come, even up to the present day. But the problem with movies like this is, during the last half-hour at least, it gets very boring and repetitive. But you have to show the Kumite, right? So on and on it goes. 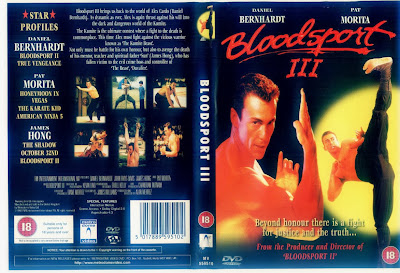 Before the internet and even Pay-Per-View, renting movies like this was one of the only ways to see fighting of this kind on film. It’s easy to forget that in this day and age. So the movie gets somewhat of a pass, but it really should have bothered to do a bit more character development and maybe concentrated a little less on extended Kumite footage.

We realize we’re talking about Bloodsport III here, but still, we think that’s a fair criticism. The first half of Bloodsport III is actually a lot of fun. It has that silly, funny, absurd vibe we love so dearly. But then it slows down and becomes more standard, unfortunately enough.

Daniel Bernhardt must have been an obvious choice to fill the shoes of Van Damme, because, let’s face it, he’s basically the same person. We’ve never seen them in the same place at the same time, have we? It must have been tough living in the shadow of JCVD. But somewhere in between Van Damme and Olivier Gruner, the Bernhardt dwells.

At many points throughout the film, you could swear that it IS Van Damme. But Bernhardt puts forth his best “suave eyebrow” to woo the ladies, and why wouldn’t he go after Crystal Duvalier (Van Lent), with a singing voice like that? In the “white tuxedo” scene, he truly is Daniel BernBond. But the man has his own personal problems and demons as well, as he has nightmares of recycled footage that he has to contend with.

Perhaps, in the end, Bloodsport III raises more questions than it answers (what exactly is the timeline of all these Kumite matches as they relate to parts II and III? Why do deathfights to the death have a ref? And so many others...).

But it does have a noteworthy end-credits song, “Rhythm of the Kumite” - a techno tune where you think at any moment someone will yell “Mortal Kombat!!!!!” - but they do indeed yell “Bloodsport!!!!!”, so, no harm no foul. So basically the first half is entertaining but it devolves into a slog. So watch it on YouTube and save the money on your credit Cardo.

Also check out write-ups by our buddies, DTVC and The Action Elite!
Posted by Ty at 31.1.14

Every entry of the Bloodsport series was worse than the previous one. Bernhardt should get the chance to make more action movies.

Bernhardt has always been solid. Special Forces is a fun one.