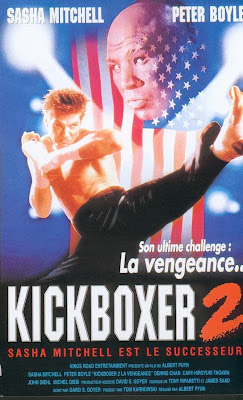 David Sloan (Mitchell) runs a humble gym in L.A. where he teaches street kids the philosophies behind fighting. When hot shot fight promoter Maciah (Boyle) and his associate Sanga (Tagawa) offer to give Sloan some major fights and basically rocket him to fame, Sloan declines, because money and notoriety mean nothing to him, he has far too much integrity.

Disappointed, they take on Sloan’s friend and fellow fighter Brian (Murdocco) as a client. Unfortunately, Brian must fight the evil Tong Po (Qissi) - the man that killed David’s brothers. So the fact that Kurt Sloane (Van Damme in the previous movie - who spells his name with an “E”, which is either an indication of Estevez-Sheen-style family dysfunction, or a simple oversight) is now dead and there’s a brother that was never previously mentioned, and it’s something us as viewers are supposed to simply ignore.

Seeing as how Tong Po has some sort of strange, unexplained obsession with killing the entire Sloan (e) family, Xian (Chan) trains David, and then the climactic moment finally comes when this new Sloan brother takes on the vicious Po in the ring. What will happen?

While it’s a good thing that Sasha Mitchell took over from Van Damme - if the Kickboxer series was to continue without him, anyway - because Mitchell is likable and has good screen presence, the other side of the coin is that Albert Pyun directed Kickboxers 2 and 4. Pyun’s movies tend to have many scenes that drag, and this movie as a whole is too dark and logical. There are no wacky, bizarre edges.

Thankfully, the non-Pyun-directed part 3 in the series was a much-needed shot in the arm and is a lot of fun. Sadly though, Pyun returned for part 4, as if to say “you kids were having too much fun in part 3”. Old Albert does have an over-reliance on slo-mo, but Pyun does include a montage with a great song, “A Man Alone” by Savoy Brown and a training sequence, separate and apart from each other. So it’s not a total loss. 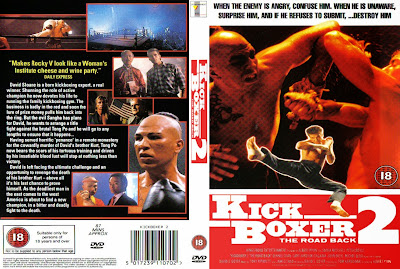 Of course, none other than Peter Boyle himself is on board as Maciah, a man who wants to turn men beating each other into a worldwide commodity. In that way, this movie predates UFC. To see Boyle standing side by side with fan favorite Matthias Hues (inexplicably playing a guy named “Neil Vargas”) was a rare treat. Vargas’ brand of spandex-based fighting was certainly of its time, and perhaps an effective intimidation tactic. I know if I saw a long-haired musclebound brute with aqua tights on, I’d run the other way. But part of Xian’s training ritual for David Sloan is to have him wear a similarly-colored half-shirt while working out in the park, so maybe he’s fighting fire with fire. Or aqua with aqua. 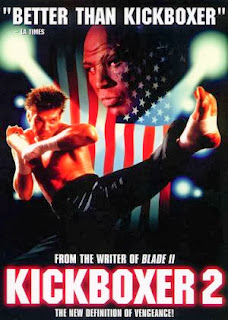 Even before Sloan meets Xian, he seems to have a cultured philosophical mind, but Mitchell’s Keanu Reeves-like California Dude voice makes him seem like he’s going to end every thought-provoking maxim with “...Dude”. But Chan plays the Mr. Miyagi-like role endearingly enough, a mirror image of the suave but corrupt Sanga, played by regular face on the site, Cary-Hiroyuki Tagawa. So we’ve got Sasha Mitchell, Peter Boyle, Matthias Hues, Dennis Chan, Cary-Hiroyuki Tagawa, Vince Murdocco...what could be missing? Of course, Brian Austin Green! He plays a classic 90’s punk kid with a King Diamond shirt who, much like Thomas did to Jesus, doesn’t believe in the awesomeness of David Sloan.

This must be what Megan Fox finds so endearing about him. Last but not least is Michel Qissi as the strange-faced Tong Po. Who now is just an out-and-out murderer who has the outward appearance of a kickboxer. He’s a serial killer who just uses kickboxing as his method of death. But as we’ll (briefly) hear about in part 4, he does become a record producer. So there’s that.

Kickboxer 2 is something of a mixed bag. The cast is good, but the Pyunniness is not. It’s a rocky way to start off the parade of sequels, but it’s not without some charm. It’s a mainstay in many used VHS sales, so if the price is cheap enough, it’s a viable addition to your collection.

Also check out write-ups from our buddies, DTVC, The Video Vacuum, Ninja Dixon, and Ruthless Reviews!

I always felt this movie was a bore due to its lack of action scenes. The weakest of the Kickboxer franchise in my opinion.

There were some definite weak points in this. At least it had Matthias Hues. Haha.