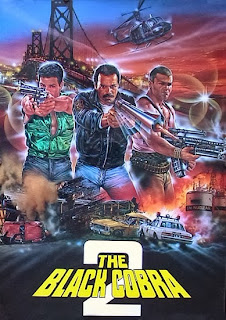 Robert Malone (Fred) is back! This time around, his rogue ways make him a prime candidate to be part of an “exchange program” where American cops are sent to international locations. His BYC (Black Yelling Chief) Captain Marton (Santana) (who would re-appear in Black Cobra 3 - even though it looks like his scenes were shot at the same time) ships him from his beloved Chicago to Manila, the Philippines. When he arrives, his contact and partner is the straitlaced Lt. McCall (Hammond), and, wouldn’t you just know it, they have trouble getting along at first. When Malone’s wallet is stolen, it turns into a trek all around the Philippines to track down the baddies responsible. Eventually, a nightclub singer named Peggy Mallory (Emma Hoagland) becomes involved and Malone has to pull out all the stops to protect her and stop the baddies. Can he do it?

We were happy to see Williamson return as Malone, and the two Edoardo Margheriti-directed sequels to the original Black Cobra (1987) are certainly worth seeing. Fred’s charm exudes aplenty and it mixes in an entertaining way with his awkwardly funny way of kicking the baddies. It’s always fun to watch The Hammer, and as he causes havoc in the Philippines, it’s hard to lose. While there is the standard shooting-and-blow-ups combo, there was a pretty slow section in the middle where not a lot happens. But it recovers towards the end with a classic dockside confrontation with some goons. It’s also nice to see a movie shot in the Philippines that actually is set in the Philippines, and isn’t trying to hide it. Of course, it wouldn’t be a Fred Williamson movie without a scene in a nightclub where a female singer belts out a song, and here is no exception. This time it’s performed by Emma Hoagland, in her only screen credit to date. 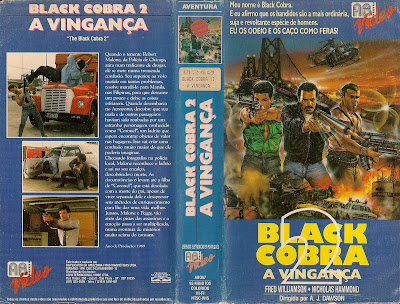 For the first section of the movie set in Chicago, Fred wears a Cubs baseball jacket. When he arrives in the Philippines, that jacket is never seen again and he switches to a light blue Members Only number. This reminded us of the legendary Chuck Connors, who, in the latter part of his career, was rarely seen without his Brooklyn Dodgers jacket. Wouldn’t it be awesome if the two men starred together in a “battle of the jackets”? It could be a Tough and Deadly (1995)-style situation where they argue about what music to listen to. Too bad it never happened. But, in classic style, Fred does say “we’ve got company!” so there’s that. Also he plays slot cars with McCall’s overly-sophisticated son in a movie highlight.

Featuring a very cool score by Aldo Salvi that alternates between keyboard synths and more guitar-based rock, Black Cobra 2 is a nice anchor between the other two entries in the series. It’s hard not to like Italian-made, Philippines-shot Fred, and here is a prime example.

This was the weakest of the Black Cobras, although it's always good to see the Hammer in action. There is apparently a fourth movie in the series called Detective Malone, but I'm not sure if it has ever been dubbed to English. The fourth one is a cut-and-paste effort since Fred didn't take part in the filming.

The Hammer always delivers. Heard about the cut n' paste job. Will avoid it.

Yeah part 4 sucks, though part 3 is the best in the series.