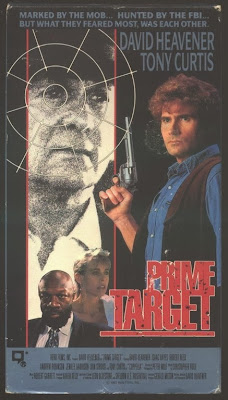 Jonathan “Blood” Bloodstone (Heavener) is a cop who plays by his own rules. Sure, he may be a bit crazy, and he thinks he’s a modern-day cowboy, but when Captain Tompkins (Hayes) wants results, he calls in Bloodstone. When the FBI, led by Agent Harrington (Reed) call Bloodstone in to transport a mobster named Marietta Copella (Curtis) on a long car ride to a new, secret location, at first he isn’t interested. But he needs $25,000 or he’s going to lose his house. So, Bloodstone reluctantly agrees to the assignment. Once on the road together, the two men are the original odd couple, Copella a slick-talking, high-class Italian gangster, and Bloodstone a flamethrow-first-and-ask-questions-later good ol’ boy. After some adventures and trials and tribulations on the road, they both realize the truth about this particular road trip. Yes, there’s a TRUTH behind this road trip. Dare you find out what it is?

We’ve always been champions of David Heavener. Anyone who reads this site knows we’re always extolling his virtues - he can act, write, produce, direct, do Martial Arts, and is a musician who plays guitar and writes his own songs. We’ve always said he should have gotten more recognition, both by the Hollywood establishment, as well as the general public. We’ve maintained this attitude towards the man and his work, even through some of his wonkier productions. But now, finally, our outlook has been validated. Prime Target is the best Heavener movie we’ve seen to date.  It has a crisp, professional look, and is snappy, entertaining, and never boring. The plot is actually fairly engrossing, and this would be a great place to start if you’re unfamiliar with Heavener. 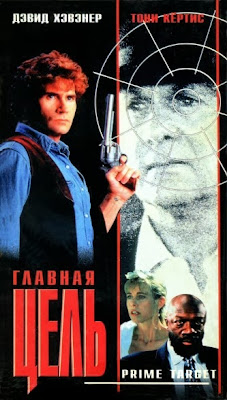 Tony Curtis is on board as the garrulous Copella, and the interplay between him and Bloodstone provides a lot of the meat of the movie. Curtis had a hard job, he’s supposed to be the time-honored “annoying” character, but if you’re too annoying, the audience will check out entirely, so you have to balance. We felt he did his best and he does put energy into the role. There’s also fan favorite Isaac Hayes as the police chief, and the Brady Bunch’s own Robert Reed as the FBI guy. They even interact in several scenes. Where else are you going to see that? 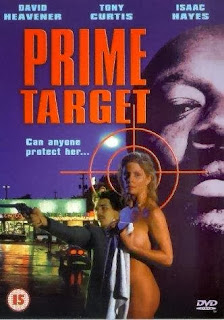 Like a lot of Heavener movies that came out on VHS back in the golden years, this has a commercial before the movie advertising something Heavener-related. These commercials are always awesome, but this one takes the cake. The ad is for...wait for it...a David Heavener HOTLINE where you call 1-900-DAVID! This is absolutely real. Apparently you can get information and behind the scenes info about the movie and even get a Prime Target T-shirt. And here’s the best part - the line “Kids get your parents’ permission”!!!! What KID is a. renting an R-rated movie b. renting a HEAVENER movie c. renting PRIME TARGET and d. the odds of this kid existing and wanting to call the Heavener hotline are...what? We know they have to say that for legal purposes, but has there ever been a young tot who has said, “mom, can I please call 1-900-DAVID? I want to know more about Prime Target.” It boggles the mind.

You’ll be singing “blooood-stoonnnne” (Judas Priest reference) when you see Heavener’s belt with the word “Cowboy” emblazoned into it, and especially when you hear the amazing intro/outro song, “I’m a Honky Tonk Man”, which is this sort of country rap which predated Uncle Kracker and Kid Rock by many years. Yes, as if a hotline wasn’t enough, Heavener actually raps. And you get a movie called Prime Target on this VHS tape as well, so for value-for-entertainment-dollars, you really can’t beat this one.

Watch Jon Bloodstone turn the FBI into the “Federal BLOODSTONE Investigations” with this classic tonight.

I love, I absolutely love the idea of a David Heavener hotline.

Did you ring it to see if, by any chance, it's still running? I hate to think of you being left with questions about Prime Target that only David can answer.

But seriously, Heavener is way ahead of the game her. He's clearly trying to make his films an interactive experience. Breaking down the barriers between artist and audience.

Today, with social media, we take that for granted. But here's Heavener blazing a trail back in 1991. He was like 20 years ahead of social media.

We actually tried to call, no answer!

You're right, Heavener was ahead of his time. He should be on all social media platforms.

It seems David has given up the phone line for social media, you can find him here:
https://twitter.com/actingseminar
or attend his acting workshop
http://tickettohollywood.org/

Will have to check that out. Thanks for the info.

Does the movie have a lot of unanswered questions?

How great would it be if it ended on a cliffhanger and said "call the HOTLINE to find out what happened to Bloodstone!!!"?

Haha! That would've been hilarious.