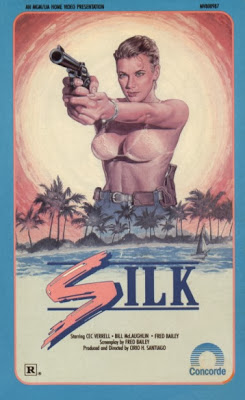 
Jenny “Silk” Sleighton (Verrell) is a tough, fearless cop on the Honolulu, Hawaii police force. She stops at nothing to get her man. Whether it’s foiling drug deals, stopping smuggling operations or breaking up cockfights, baddies on every island from Niihau to Kaunakakai to Kahoolawe to the Alenuihaha channel are facing her wrath. When she’s kidnapped by arch super-villain Austin (Shilton), she’s going to need help from her compatriots...but who can she really trust? Find out today!

Silk gets off to a very silly start, with cop movie/TV show cliches galore (someone really needs to invent a word that means “a cliche but with no negative connotation; in fact, you want and even need to see this cliche”. No such word exists in English that we’re aware of. If you have any ideas, please leave a comment today).

Cec Verrell as Silk is amazing. She’s a beautiful woman in that classically 80’s style, with a smoky bedroom voice, and she always has her hair slicked back and is wearing designer clothes. But no one ever questions why one of the models from behind Robert Palmer in the “Addicted To Love” video is now a cop. (Not literally as far as we know, but it very well could be). The fact that this absurdity is never once brought up makes watching Silk a delight.

The fact that Silk is a woman doesn’t change all the myriad cliches one bit. But we’re just happy this Cirio movie isn’t yet another jungle slog. Plus it has all the Philippines-based B-actors we know and love at this point: Nick Nicholson plays another heavy, Mike Monty is on board again, as is Willie Williams, Jose Mari Avellana, Henry Strzalkowski, and naturally, Vic Diaz.

The extras in the movie are great too, and the dubbing ties it all together. The guitar-based soundtrack by Willie Cruz keeps the energy up, and there is a truly excellent title song which sounds like if Pat Benatar joined Jem and the Holograms. In a true travesty, we do not know who performs this memorable tune. If anyone out there knows, do tell.

Styles were so cool back then, even teddy bears had sunglasses and mustaches. But besides that, we’re always on the lookout for when video stores pop up in movies, and in Silk, we see one in a mall. There’s even a poster for Ark Of the Sun God (1984), the Margheriti movie, which can be clearly seen.

In the end, Silk is an enjoyable (probably) one-time watch, because nothing in it really sticks to the ribs. We would like to see more Cec Verrell as Silk, but by the time of Silk 2 (1989) (yes, there’s a Silk two), apparently she’d had enough and was replaced by Monique Gabrielle. She never came back to reprise the role like Sean Connery. But for video-store action with a strong and interesting female presence, it’s certainly worth a view.

Also check out write-ups from our buddies, Lost Video Archive and Cool Target!
Posted by Ty at 10.1.14

Nice, I just wrote this one up too. You clearly liked it more than I did! That cover is pretty classic though, Santiago got some great covers for his videos.

You got that right. It follows the Cirio formula pretty well, love it or hate it. VHS box art has led us to worse decisions. Haha.

I haven't seen Silk yet, but watched the trailer a few weeks ago, and it looked fine.

Silk is a solid flick. Perfect movie to watch with some beer and your buddies. Same with Angelfist.