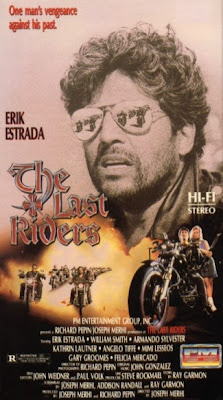 Johnny Wilson (Estrada) is a member of the Slavers biker gang, but after a botched escapade involving money and drugs, some people die, including a cop. After this, Johnny decides he’s had enough, and departs the Slavers for good. Or so he thinks. He ends up in a dusty ol’ Nevada town, working as a mechanic with his old friend Hammer (Smith). He soon meets a woman, Anna (Middleton) and her young daughter, Sammi (Mindy Martin), and he begins to rebuild his life.

But his past soon comes back to haunt him, as the Slavers feel he betrayed them, and they’re out for his blood. And law enforcement feel similarly, blaming Johnny for the death of the law enforcement officer. Now, as both sides of the law are gunning for him, Johnny must make his final stand. Will he truly be one of the...LAST RIDERS?

We felt that The Last Riders was a rare misstep for the normally-solid PM. It has a weirdly disjointed feel, with a lot of airy, empty space when there should be more forward drive. It essentially becomes a romantic drama at one point, which wouldn’t be so bad, but the filmmakers somehow managed to screw up what should have been a slam-dunk ending.

We won’t give away any spoilers, we’ll just say it’s edited and paced...unusually, and where there should have been full-throttle revenge, it lacks a powerful momentum. In our world, botching what should have been an appropriate revenge is an inexcusable mistake. As much as it saddens us, we can’t give The Last Riders a very high rating. We love Merhi, Randall and PM, and we love Smith, Lesseos and  Estrada, but something went awry here. It’s unfortunate. 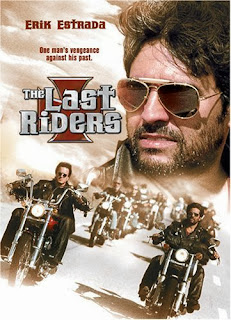 The movie is truly Mimi Lesseos at her best. She has a great look, and as a female wrestler (which she also portrayed in the same year’s Pushed To The Limit) she gets to show off some of her moves both in and out of the ring. She’s only in the first part of the movie, unfortunately, and after she departs, the movie suffers immensely.

The whole “romance” sub-plot is pretty typical: Middleton plays your classic “annoying woman” who doesn’t get along with Estrada, and they butt heads over disputes like food, but, after a whirlwind courtship, they end up marrying after only knowing each other a few days (?).

But Sammi, the young tot of a daughter, basically steals the movie. She’s a realistic-looking child, not an overly-cute “movie kid”. She has a Bart Simpson shirt, pajamas that say “KID” on them, and other classic early-90’s clothing. Her facial expressions and line deliveries are priceless.  It’s casting decisions like this (and Lesseos) that make you think...Okay, this movie isn’t bad, but it’s not great, either. But the lame ending puts a deciding nail into this coffin of a movie.

While there is the time-honored barfight, the movie could have used some more action in the middle instead of romance. Or just more of a threat from the Slavers. Slowing the pace even more are two live performances from an all-female band called The Sheilas (which seems to be misspelled in the end credits). Their songs are catchy and professional-sounding, but why are we spending so much time with them? They add nothing to the plot and we don’t know them personally.

Adding to the confusion, Hammer’s wife in the movie is named Sheila (Madden), but she’s NOT in the band, but they keyboard player looks exactly like Mimi Lesseos, who’s not in the band either. Of the non-Sheilas music, the opening song is very Cameo-like, and William Smith’s voice, which sounds like he gargles with razor blades, is like sweet music to our ears, anyway.

As a biker, perhaps it was thought that Estrada could make an easy job transition from CHiPS to SLAVERS. But regardless, The Last Riders is a disappointment.

I thought this film was pretty good, though i'll admit it was a bit slow at times.

They're were some ok moments, but the ending was weak and it needed more Erik Estrada action scenes...less talking.

I agree with you completely. A rare miss for PM. Most movies they made from 1992 to 1996 were pure action gold.

Totally agree. Last Man Standing and The Sweeper are action gold! We were surprised this was so bad. Erik should've been mowing down the baddies.