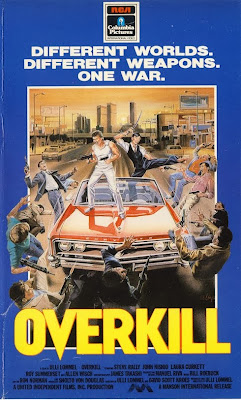 
Mickey “Mike” Delano (Rally) is clearly a man who wishes his name wasn’t Mickey. He’s also an L.A. Cop On the Edge. Putting him further on the edge than ever before is the recent influx of Yakuza in Little Tokyo. Mickey Mike makes it his personal mission to take down the gangsters that are ruining his beloved city and state. Towards this end, he teams up with Japanese-American cop Akashi (Nishio). Apparently Akashi has his own, more personal reasons for wanting to wipe out the criminals that are running wild in the city. Will Mickey Mike and the funky bunch be able to accomplish their mission? Find out today!

Not to be confused with Overkill (1996), in this particular Overkill, there’s nary a Jack Hazard in sight. Presumably that would count in the movie’s favor, but what we do have is one Steve Rally, of Maximum Breakout (1991) fame. Shirts, but in particular, sleeves, must feel like the equivalent of fiberglass insulation to his skin. When he’s not busy taking off his Powerhouse Gym tanktop, he’s shirtlessly fighting the baddies.

But he has a lot of shirtless competition, as many shameless men go about their daily business unencumbered by the onerous burden of having a thin layer of cloth on their torso. Imagine a man who finds a half-shirt too confining, multiply awesomex10, add most of the leftover DNA of Freddie Mercury, and you have Steve Rally.  Plus he predates Matthew McConaughey by many years, and his mustache is much cooler. 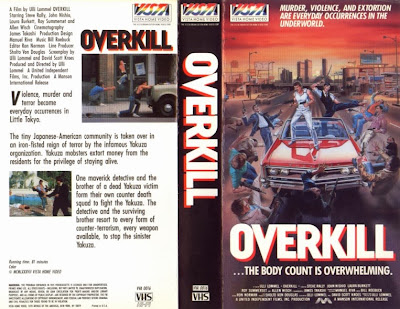 Clearly director Ulli Lommel, whose name is not a palindrome no matter how hard you try to make it one, wanted to make “Shirts vs. Skins: The Movie”, but couldn’t, as there were no shirts,  so he settled on making a cop movie. Overkill is yet another “White boy in a world of dangerous Asians” movie much like its brethren Year of the Dragon (1985), Massacre (1985), or Showdown In Little Tokyo (1991). But Lommel’s movie is like the distant stepchild to these, even the equally low-budget Massacre. It’s not entirely dissimilar from Samurai Cop (1989), but we don’t want to sing the praises of Overkill too loudly, it’s not really in that classic’s league.

The main problem is that there are a ton of weird close-ups, and the movie is incoherent because it looks like it was edited with a bandsaw. Plus it could have used a co-star of the caliber of Bolo Yeung or George Chung. Or even a White guy pretending to be Asian, like Robert Z’Dar as “Yamashita” in Samurai Cop, would have helped a lot.

Nevertheless, Mike Delano - or perhaps even Steve Rally himself - is livin’ the dream. He gets to be a rogue cop and defy his WYC (White Yelling Chief), live in a nice house with a hot babe as a girlfriend, and eat sushi while he sits in his hot tub or engages in any other activity that gives him a pretext to be shirtless. Which leads up to an inexplicable (plotwise) scene where Delano indulges in his true calling. We won’t spoil it for you, but you’ll definitely know what we’re talking about when you see it. 1987, the year of this movie’s release, was a big year for Miami Vice-mania and it shows here. You even see a little kid wearing a Miami Vice shirt, in the same scene where Delano wears a white sportcoat with the sleeves rolled up. Coincidence?

In the end, Overkill does have some highly ridiculous moments that make it worth watching, but even at 80 minutes, the movie drags at times. It’s kind of a 50-50 deal.

Man, this is a hysterical review. If I weren't holding a sleeping baby, I probably would laughed my ass off. If I'm ever in dire need for some shirtless crime fighting, I'm going to check this one out... bad as it may be.

Damn. This was a good review.

Thanks so much for the kind words. Happy you enjoyed it. It's a ridiculous movie. Haha.

It's too bad Uli Lommel stopped making entertaining films like this and made godawful serial killer films like B.T.K. Killer, you won't find another filmmaker was a larger output of crap then Lommel.

Totally agree. Heard all those serial killer films are awful. Will never watch them.