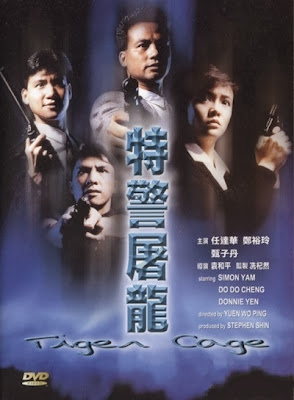 Hong Kong detectives Fan (Cheung), Shirley (Cheng), and Terry (Yen), among others, are a select band of cops set up to be a hard-hitting narcotics squad. As they take down the drug-dealing baddies, they realize there is a conspiracy that goes all the way to the top. It even involves police corruption at the highest levels. When it’s discovered that there is a tape that shows some of the illegal doings, all hell breaks loose as the forces of evil vie for the tape, while the good cops must protect it  - at any cost.

We absolutely loved Tiger Cage. If you love those classic Hong Kong police actioners from the golden age of the 80’s/early 90’s, this one is a killer. It’s fast paced, colorful, exciting, and has plenty of bone-breaking action. There’s tons of shooting in a gritty urban environment, but also some top notch Martial Arts battles as well. Donnie Yen’s big fight scene naturally stands out. Speaking of Yen, Tiger Cage is kind of like Flashpoint (2007) before Flashpoint. The stunt work is awesome, as many characters take a lot of punishment and keep on coming. The whole movie has that dynamism and infectious energy that makes these Hong Kong productions so addictive.

This kind of violent, no-holds-barred style is like manna from heaven for action fans and makes productions from regions other than Hong Kong seem slow and dull by comparison.

It’s not just a mindless shoot-em-up, however. Interwoven are the timeless themes of honor, betrayal and loyalty. This emotional approach gives the film (as well as other HK productions) its unique flavor and gives the violent doings a reason to exist. There are characters you really, really root for, as well as some super-evil bad guys. You never lose interest in what you see on the screen. Adding yet another layer of greatness is the fact that VCRs play a pretty important role in the movie. So it gets in that 80’s flavor as well.

If you can see this on Netflix Streaming, do, because it’s a top-notch stream in widescreen with subtitles. But any way you see Tiger Cage, it truly delivers the goods.