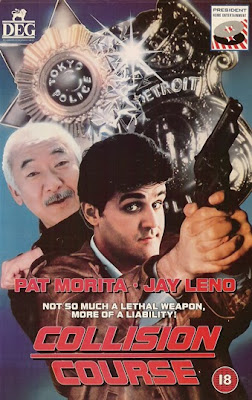 
Tony Costas (Jay “Men are like this, but women are like this” Leno) is a Detroit Police Detective, as you might expect. Fujitsuka Natsuo (Morita) is a “Detective First Class” in Japan. When his chief, Kitao (Oh), sends him to Detroit to investigate the corporate intrigue behind a very special car part that could revolutionize the auto industry, he immediately thinks of Jay Leno and tells him to find him. So while, initially, according to the back of the VHS box, the two men are “as different as hot dogs and sushi”, they eventually learn to work together, despite cultural differences and Jay Leno’s annoying presence. An impressive list of excellent names orbits the wacky goings-on, including the great Noonan, Sarandon, Cobb, Hudson, Starr and others. Will Costas and Natsuo get to the bottom of the matter before being killed by the baddies? No matter what, you’re - again quoting the box - “guaranteed a lot of action. But you’re guaranteed a lot of laughs!”

Well, it finally happened. The day you knew was coming finally arrived. The ultimate action star, Jay Leno, has been set loose, has a gun, and is running around Detroit savagely murdering people. Okay, well, maybe that’s a bit of an overstatement, but as you can clearly see above, he does indeed have a gun. And he doesn’t seem to be afraid to use it. The terms “Jay Leno” and “weaponry” should always be used together, and here they finally have a harmonious home. Naturally thanks to the greatest casting decision of all time. (Or at least since Art Garfunkel had a Short Fuse). 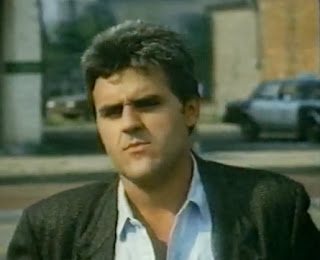 But really, this is your classic 80’s buddy cop/action/comedy we’ve come to be very familiar with, very much in a similar vein to Action Jackson (1988) for the automobile-related intrigue in Detroit, but also Red Heat (1988) for the “wisecracking cop teaming up with a fish out of water from another country” theme. Jay Leno probably only agreed to be in it because the subject matter involves cars. Don’t be afraid of his high-pitched squeakings; in actual fact, Collision Course is highly entertaining. It stacks one nutty scenario on top of another for pretty much the entire running time. For an action comedy that’s 80’s through and through, Collision Course definitively delivers the goods.

It’s even fascinating to watch as a time capsule, because it was set in a time when Japan was considered a major threat and rival. And because Jay Leno is a cop who plays by his own rules and occasionally flouts the law himself, and lets fly with some classic casual racism, and goes up to any woman he sees and asks for their “home number”, through the wildly PC eyes of 2013, Jay Leno would be seen as a fascist, womanizing racist. But it was all in good fun back then. Plus, at any moment you think he’s going to tell the audience it’s okay because “crunch all you want, we’ll make more.” It’s a shame Leno gave up his budding career as an action star and chose to be the host of the Jay Leno Show (not The Tonight Show. The Jay Leno Show).  What a waste. 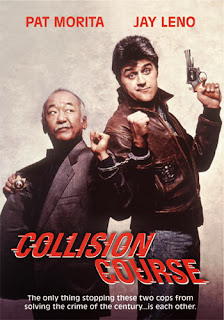 Yet more silliness ensues when Pat Morita is onscreen and stereotypically “Asian” music plays. You want to scream “we get it, he’s Asian!!!”. And when asked his name, Natsuo says “Dwayne Johnson”, predating The Rock by many years. Also there is a missile gun, fruit cart chases, sax AND funk on the soundtrack, and not just a freeze-frame, a split freeze frame. There’s also a top-notch BYC (Black Yelling Chief), played brilliantly by John Hancock, who signs this movie with a huge signature (sorry about that, but it‘s true).

The icing on the cake is an ad after the movie is over, informing us that if we weren’t fully entertained, we could send in our “rental receipt” and get a full refund! Now who on God’s green earth would do that? They must have been fully confident in the ability of Jay Leno to delight and amuse, even though lawsuits prevented the movie from being released on VHS for about six years (it was shot in 1986 and didn’t come out on VHS until 1992. Presumably this was strategically timed for Jay Leno to be crowned victorious in the Late Night Wars of the early 90s. Whether people thought this would help or hurt his chances in said Wars remains unclear). 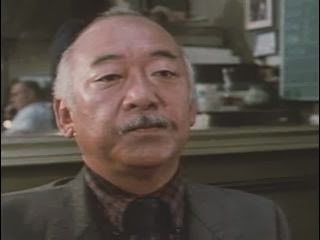 So for unabashed silliness that’s a lot more entertaining than you might think, give Collision Course a try. Also, if you want to know what a “hard PG” looks like, here it is. After all, this may be your only chance to see Jay Leno brutally executing his rivals.

Also check out write-ups by: The Unknown Movies, and Explosive Action!
Posted by Ty at 31.12.13

Yep, this movie is a classic just for how ridiculous it is. Leno isn't too proud of it though, I remember he got pretty embarassed when Steve Martin brought it up on his show.

Leno should return to acting in action movies after he leaves The Tonight Show. Haha.

Love the write up. I'm glad the film lived up to the promise of its casting and premise.

And this is so true. Sad times: "...through the wildly PC eyes of 2013, Jay Leno would be seen as a fascist, womanizing racist. But it was all in good fun back then"

Thanks! This delivered the goods. Hope you get to see it soon.

A glorious movie! Will definitely never make it to DVD, haha.

Haha! It really is an 80s classic. It's too good for DVD. It should just be on VHS forever. Haha.