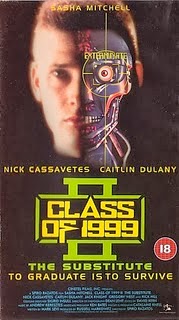 
In the future of 1999, punks rule the hallways and classrooms of our nation’s schools. Sure, they may look like they’re between 35 and 40 years old, but they still enjoy spray-painting the walls and causing general mayhem. But not if John Bolen (Mitchell) has anything to say about it. Bolen is a stone-faced cybernetic organism that believes just about everything in the world “leads to anarchy”. So he stops problems at their source by violently killing anyone he believes to be a no-goodnik.

When a young, pretty, and somewhat naive teacher, Jenna McKensie (Dulany) wants to testify in a trial because she witnessed a murder perpetrated by evil student in his mid 30’s Sanders (West), school authorities do nothing, local cops advise against it, and her boyfriend Emmett (Cassavetes) is relatively ineffectual. It’s a good thing John Bolen is here to bring corporal punishment back to the school system! For some unknown reason, Jenna actually takes a shine to the possibly misunderstood killer robot. But when Bolen flips out and can no longer “maintain order”, will he mistakenly turn on Jenna? Find out today!

Why a second sequel to Class of 1984 (1982) - let’s not forget about Class of 1999 (1990) - technically speaking, needed to exist, we don’t exactly know - but there’s plenty of fun to be had here. Because it was filmed in the 90’s, it not only has some VR (because in the future students will learn using those big, bulky masks), but the final third of the film actually is a Paintball Gone Wrong, or PGW, slog. But therein lies one of the problems with the movie.

It moves along at a nice clip for a little over the first half, but then slows way down towards the end. It’s almost like a robot running out of fuel. It needed to have a giant lunch like John Bolen does in the movie. The movie is at its best when Bolen is going around killing punks, but can that sustain a whole 90 minute film? 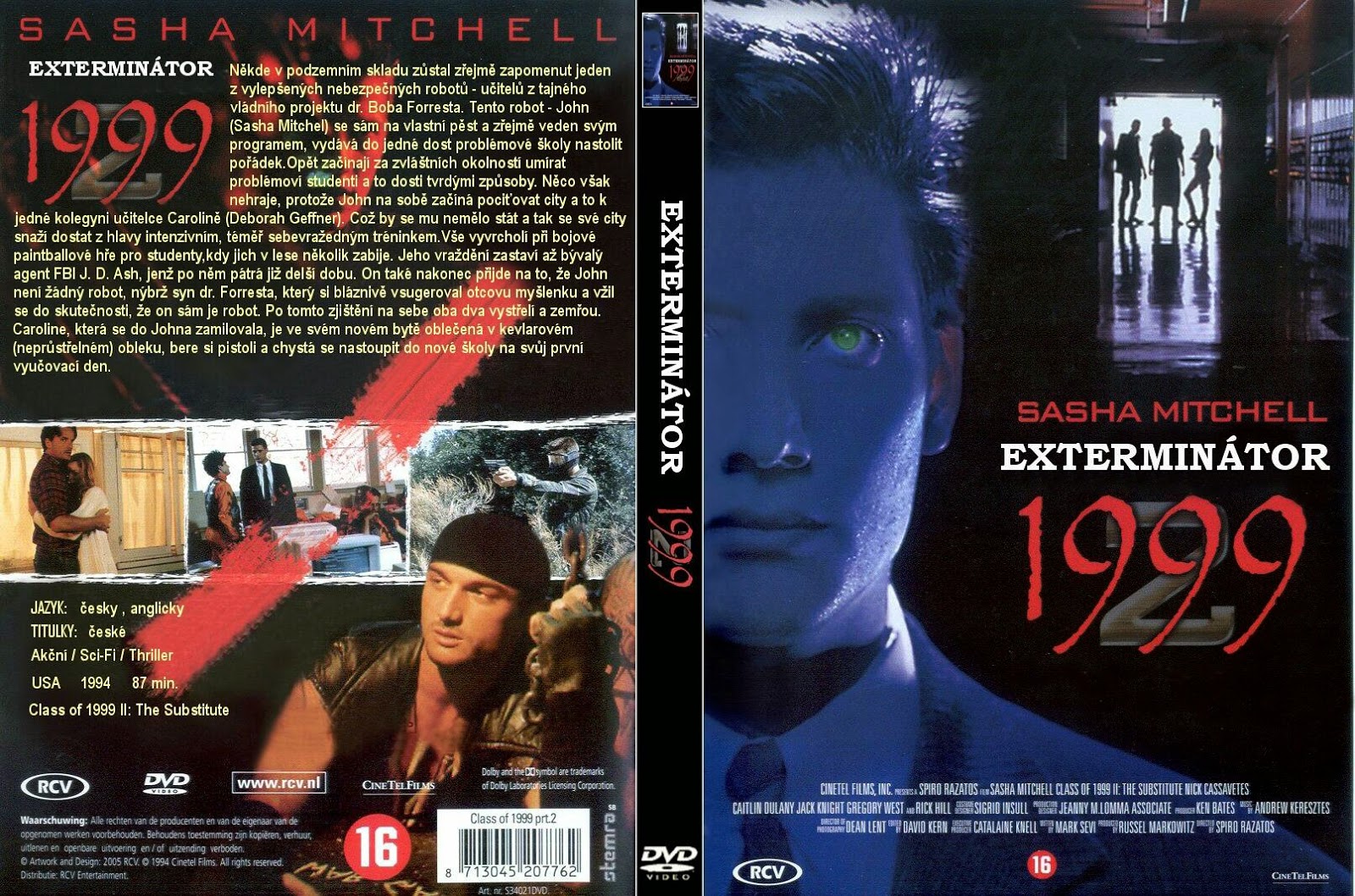 Sasha Mitchell is great as Bolen. Imagine a robotic Keanu Reeves. Which shouldn’t be too tough. Mitchell as this Keanu-bot shines in his role, especially when he just stands there emotionlessly after walking away from an explosion. Most people would continue to walk. He just stands. That’s just how emotionless he is.

He really meets his match against the punks (even in the end credits, they’re known as “punks”). They tend to wear jumpsuits, and have strange makeup and bizarre hair. Because it’s the future, you see. Sometimes they even wear their jumpsuit with a leather vest. Now that’s a fashion statement.

But as we’ve seen before, Bolen has an all-black “revenge outfit” that he puts on when things get serious. Mitchell has some good lines and some very entertaining stone-faces that help the movie along. But once it gets to the PGW section, the movie as a whole seems to lose focus and go off the rails. 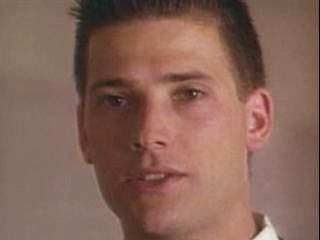 The whole venture is classic 90’s, from the VR to the PGW. This particular VHS seemed to be a video store mainstay back in the day. While some people may say this movie is nothing more than a “Substitute” for a better film, we say it brings back video store memories and isn’t bad. And any movie that takes place in the future which is now the past gets extra points in our book.

Watched this recently. You nailed it. 1st half looks decent but the paintball ending sucked (also how bad was the "twist")!

Need to track down some more Sasha Mitchell - any recommendations?

The twist was pretty weak. Probably the best Sasha is Kickboxer 3: The Art Of War.

After this Spiro Razatos and other PM Entertainment alumni directed Team Knight Rider. If you ever get around to TV reviews at least take a look at the first episode directed by Spiro.

We love Razatos too! We have no plans at the moment to do TV reviews, if we did, we would review Strike Back, Cobra, and Street Justice.