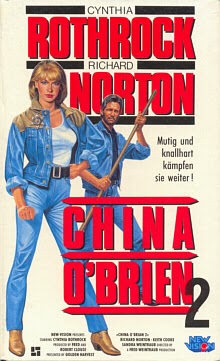 China (Rothrock), Matt Conroy (Norton) and Dakota (Cooke) are all back - and we’re definitely happy about that, but there’s a creeping suspicion that this sequel never really needed to exist. Famed director Clouse should have re-purposed the cast and settings into an all-new movie. But as it stands, it’s decent enough, as China and the gang fight an evildoer named Charlie Baskin (Marks) and his goons as they try to disrupt their idyllic small town life with their crime spree. That’s pretty much it for the plot.

Technically, that’s all that’s really necessary to make a good Martial Arts movie, but this particular outing lacks intensity most of the time. Obviously the fights are the highlights of the film, and that is where everything clicks and comes together, but what surrounds it is kind of mushy, if that makes any sense.

China O’Brien 2 is “country Cynthia” - as opposed to City Cops (1989), we presume. She fights overweight bumpkins named Bubba while pedal steel music plays in the background. It shows her versatility. Plus the all-acid wash outfit she wears while fighting is awesome. Keith Cooke’s fighting style is quite dynamic, and he adds a lot of life to the proceedings. It’s hard to believe Billy Blanks went uncredited. His pants alone are worth a credit. His zebra print Zubaz, or ZPZ’s for short (you’d be surprised how often we need to abbreviate this) single him out and bring him to the forefront, so how dare they not credit him? Oh well, fans know it’s him, so, it doesn’t really matter in the end. 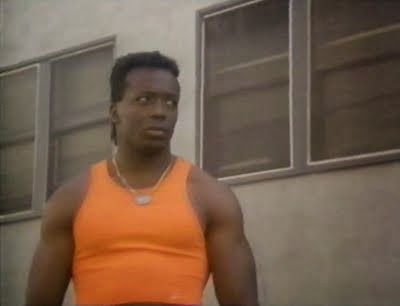 Toshishiro Obata, who has had an interesting career, having been in many movies covered on this site, from Ghost Warrior (1985) to fellow Rothrock/Norton vehicle Rage and Honor (1992), among others, stands out as well as “Man With Claws”, a goon who wears Wolverine/Freddy Krueger-like metal claws on his hands. There’s also a baddie who dresses like Indiana Jones and even brandishes a whip. So there are a few little standout things, but China O’Brien 2 isn’t really essential viewing, unless you’re a fan of Rothrock, Norton, or Blanks and need to see everything they’ve done. It’s not a bad movie at all, but the stuff in between the fight scenes is a bit lacking.

Also check out a write-up from our buddy DTVC!-Thanks for the Billy Pic too!

Once again, we agree. Sometimes the pants are equal with the rest of the cast.