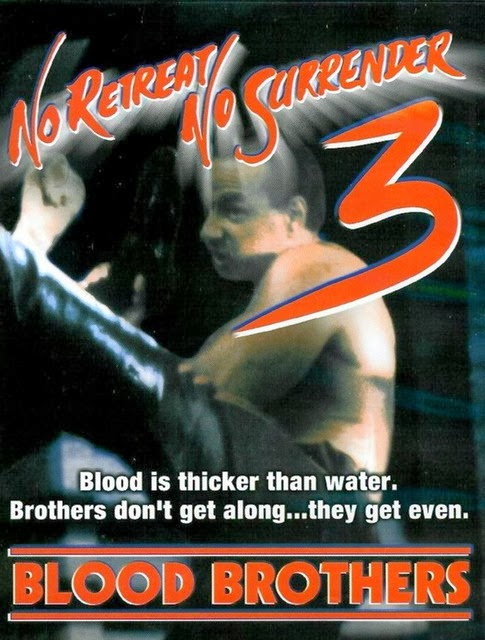 
The Alexander brothers couldn’t be more different: Casey Alexander (Vitali) is a CIA operative like his father, is a straight shooter and a dutiful son. His brother Will (Avedon), however, is a disaffected and unlikable jerk who gets irritated any time anyone says anything to him. Even when their father John (Campanella) is mercilessly killed, the brothers have their own ways of doing things.

Will travels to Florida and goes undercover as a guy named Jesse just so he can get close to the evil Franco (Hunter) and his criminal organization. Casey also goes to Florida and teams up with Maria (Acuna) to try and get answers in his own way. Of course, the paths of the two brothers intersect and they end up fighting Franco together. Will this be the end of sibling rivalry after all?

The No Retreat No Surrender series have all been solid entertainment, and this installment is no different. It’s an in-name only sequel, with Avedon playing a different character, but no one really cares. It’s all about the great stunts and very impressive Martial Arts fights. Funnily enough, Avedon’s character, Will, goes through no arc whatsoever. He’s a jerk at the beginning, remains a jerk, and is still a jerk at the end. It’s a good thing Avedon is a competent Martial Artist, or there would be nothing for audience members to latch onto.

His counterpart Keith Vitali is cool, and the guy definitely has moves as well. He more than holds his own with his on-screen brother and in many cases outshines him. Rion Hunter of Cage (1989) fame plays the very Matthias Hues-like baddie well, and only a bad guy could have hair like that. 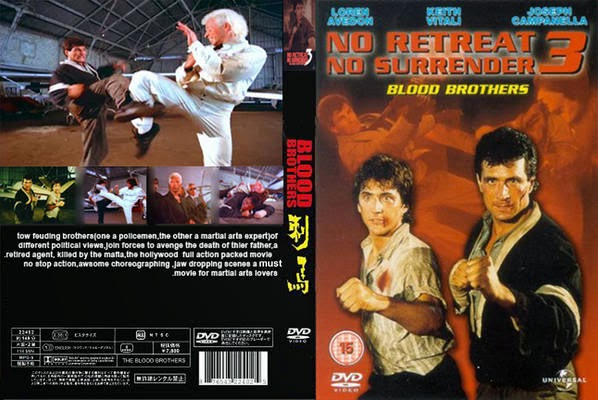 The weirdness quotient is maintained with such moments as when a video-generated on-screen quote from Chairman Mao is randomly inserted into the proceedings and looks like an editing mistake. Avedon drives angrily while chomping down equally angrily on a piece of bread, and Casey’s one-way conversations with a computer, which predate Siri by twenty years or so.

But the old standbys are here too, such as the abandoned warehouse and the prerequisite torture. But the movie undoubtedly gives you what you want, especially the blowout ending. The actors and stuntmen clearly were working overtime to entertain the audience, and that effort is on screen, and much appreciated.

This was a solid franchise, the second one being my favorite. Loren Avedon should have been a bigger star.

Loved part 2 also. Totally agree, fun franchise. If only Avedon was more likeable, he could've been a bigger star...maybe a Daniels or Lamas type with more movies.

Yeah, the second No Surrender is my favourite too. This is ones okay but lacks the awesome fights of part 2 or the cheesy montages of part 1.

Love the bit near the beginning where their father is getting beaten up by thugs and everytime he falls to the floor it's really obvious it's a Chinese stuntman in a white wig.

Haha! The beginning was great. Not a obvious stuntman at all...Haha. Part 2 is the best one, it has Rothrock and Matthias Hues.

Respectfully, I find Avedon generally more likeable than either Daniels or Lamas. He doesn't take himself too seriously and it's rare where you come away from one of his films feeling as if he acted stiff, which is a common problem with martial artist actors. He has a natural vibe to him, and he can play the smart-ass well too. If you poke around for Avedon interviews on the web, there seem to have been incidents with Lamas and Sherie Rose that he believes might have given him a bad rap within the industry -- i.e. it doesn't have to do with his skills as a performer. He also turned down a three-picture deal with PM in the hopes he would get a more favorable arrangement, but they never came back around. Couldn't have helped.

This is only slightly below NRNS2 for me. I liked Franco as the villain and aside from the absence of Rothrock, I think the talent in the main and supporting roles (Vitali, Mark Russo) was actually slightly better in this one, which gave way to slightly faster fight scenes. Hues, at that time, was just starting out, and even though their blow-off was a major highlight in that film, he wasn't as skilled as he would become.

This was a solid action series. They don't make them like this anymore.

That is unfortunate about the bad rap for Avedon. He should make a comeback. Jerry Trimble had a nice role in The Package. He should do a villain role.

Perhaps the greatest martial arts film shot in the English on western locations. The next might be DRIVE with Mark Dacascos.. Weirdness quotient indeed!

For other examples of these types of movies, see: King Of The Kickboxers, Blood Ring and Fighting Spirit. All have been reviewed by us.

Thanks for visiting the site! Drop by anytime.