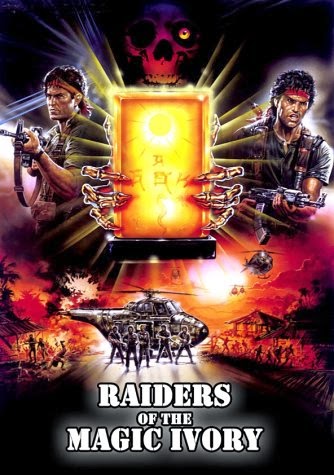 Captain Rogers (Mitchum) - whose nickname is “Sugar” (we know; very manly) was a commander in Vietnam and is now a mercenary. Together with his buddy Mark (Ahrens), the two men accept a job from an “elderly Chinese gentleman” named Lee Chang. Chang instructs the two men to go deep into hostile jungle territory to retrieve a magical tablet. Chang says if he doesn’t have the tablet at the time of his death, his family will be cursed for a thousand years. He offers the two men a substantial amount of money and off they go.

While slogging it out in the jungle, the pair encounter black magic rituals and end up saving Mei Lai (Mendez) from being sacrificed. After some more trials and tribulations where they end up mowing down baddies with their machine guns, they end up learning the truth about the mysterious tablet...but is it too late?

Raiders of the Magic Ivory (or Predators of the Magic Stone, in case anyone gets confused by its alternate title) shows that Jim Mitchum can enter the pantheon of actors who openly don’t care while on screen.

Some others being David Carradine, and the father of them all, Burt Reynolds. Here Mitchum has an overgrown and possibly asymmetrical mustache that makes him look like a sillier Stacy Keach. But obviously the title is meant to recall a certain Harrison Ford adventure movie...but here there is very little raiding going on here, their predominant means of doing their job seems to be shooting their machine guns. But perhaps “Shooters of the Magic Ivory” doesn’t have quite the same ring to it.

We love Mitchum, Code Name: Zebra and Hollywood Cop are classics. But he’s no Indiana Jones. He’s more of a “fat guy in a Hawaiian shirt”. Or possibly “mustachioed guy in a kimono”. And we mean that in the most appreciative way possible. His monosyllabic line readings, about 75% of which consist of the line “Let’s get outta here” are so droll they become funny very quickly. The doltish dialogue is definitely a movie highlight. It’s so amazingly dumb you just have to appreciate it. 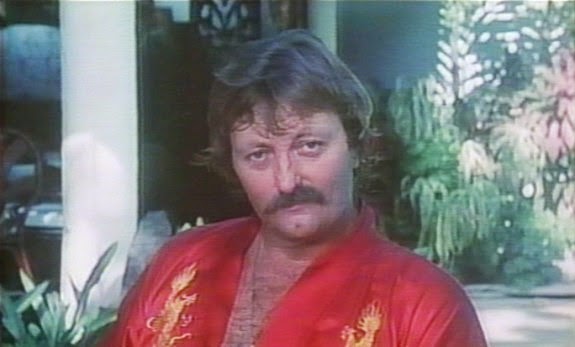 When our heroes aren’t paddlin’ down a river or fighting black magic monks, their fighting style seems to be modeled on the children’s game “Tag”. Meaning, Sugar or Mark will try and punch or shoot a baddie, and if they miss, it’s like “ha ha, you missed me, now I go after you”. If they hit, it’s like “Tag - you’re it”. You kind of have to see this to know what we’re talking about. But needless to say, it’s very childish.

Raiders of the Magic Ivory might not be the best action movie ever made, but director Tonino Ricci imbues it with that classic Italian style we all know and love. Plus Jim Mitchum is a force to be reckoned with. So despite what you may have heard, we believe this is actually worth watching.

I love this movie! It's goofy, over the top, and just plain fun!

Oh, and congrats on getting the right Mitchum. For the entirety of my review, I referred to him as Christopher Mitchum, as I thought he and James were one and the same. Given how similar they look to each-other, no wonder! Also congrats for not continually typoi-ng the title as Raiders of the Lost Ivory as I did!

What especially surprised me about this was the ending! With movies like this, you expect them to abruptly end with the heroes walking off in the distance after killing the bad guy, but Raiders actually has a legitimate ending!

Happy you enjoy the movie so much! Classic Jim Mitchum. This was a blast to watch.

Hey Ty, is there an exploding helicopter in this one? The cover looks promising in that regard.

Unfortunately, no helicopter explosion. Wished there was one. Still a fun movie though. Mitchum is hilariously wooden.