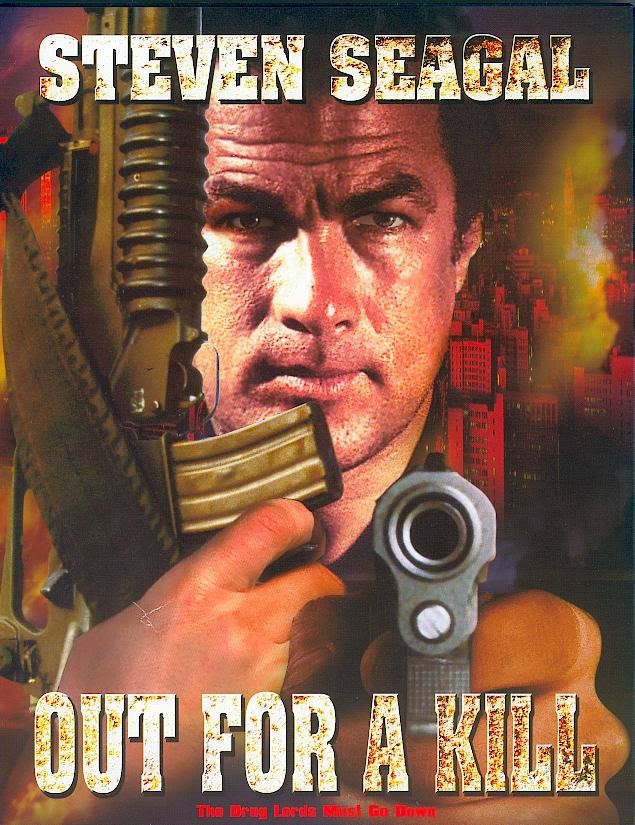 
A bunch of Chinese gangsters are using their international network to smuggle drugs. Their evil operations infringe upon the happy-go-lucky life of Yale professor Robert Burns (Seagal) and all hell breaks loose. On an innocent fact-finding mission, Burns discovers that they are using ancient artifacts to conceal their drugs. After some fights and shootouts, Burns realizes he must track down all those responsible for ruining his life.

Unleashing the awesome power within all Yale professors, he beats up, maims and kills across several continents, using their arm tattoos as clues as to where to go next. Will anyone survive when professor Robert Burns goes OUT FOR A KILL?

Latter-day Seagal meets Nu-Image. We could just stop there, because you probably know what to expect (assuming you don’t already feel like you’ve seen the movie), but we’ll continue. At the beginning of the movie, the first scene in fact, a bunch of unsmiling guys in suits walk in slow motion into a Bulgarian strip club.

Guess what happens next? You can no doubt guess, but what if we told you it involved REPEATED FOOTAGE? Then we go to Paris where a bunch of gangsters are sitting around a table. On the screen we get a bunch of fun facts about their personal lives and hobbies. We don’t know why. All we can assume is that this is the “Anti-Seagal Club” because all they do is complain about him. It seems to be the basis of their organization. We can reasonably assume there’s a crudely painted sign on the door that says “no girls allowed”. Finally we move to beautiful New Haven, Connecticut (not really, it’s probably a blue screen or possibly a green screen. What an insult to our fair city). We are, as an audience, finally ready to meet professor Robert Burns. He’s receiving an award because he’s such a talented and great man. Those stodgy Yalies probably thought they were giving the award to the national poet of Scotland Robert Burns (1759-1796). The similarities between him and Seagal are uncanny. Nevertheless, he then dons his leather jacket and becomes “Indiana Seagal”, bearing no resemblances to any other badass archaeology professors.

The rest of the movie is your typical Seagallian morass of unintentionally funny ADR work, unintentionally funny Martial Arts fights and unintentionally funny green screen shots. There are even some Sniper-style “bullet time” shots. Add to that some silly quick cuts and zooms, and there you have it. Besides the references to Yale and 18th century lyric poets, the highbrow literary references continue when Seagal goes to (what no doubt must be one of his favorite haunts) the “Cafe Sartre”. Trust us, you’ll be feeling the “Nausea” if you watch this movie. 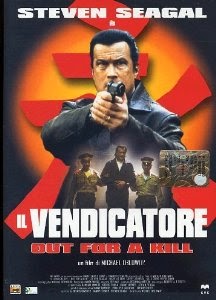 But really, there are enough funny and/or silly moments in this movie to make it rise above the level of other Seagal “Kill” movies such as Driven To Kill or Kill Switch. Speaking of the title, it’s just an unashamed mash-up of two of Seagal’s “classic” titles, Out For Justice (1991) and Hard to Kill (1990). Except “Out For A Kill” makes no sense. But it does sound like Seagal, in a domestic situation, calls to his wife in another room in their suburban house as he’s walking out the door, “Honey, I’m going out for a kill, be back in twenty minutes...” Sadly this scene didn’t happen in this movie. How disappointing.

In all, Out For A Kill has enough decent moments (be they unintentional or not) to keep this latter-day Seagal outing’s head above water. Barely. However, there are certainly worse Seagal movies out there (*cough*KillSwitch*cough*).

Also check out write-ups from our buddies, The Video Vacuum, Ruthless Reviews, and DTVC!

But it does sound like Seagal, in a domestic situation, calls to his wife in another room in their suburban house as he’s walking out the door, “Honey, I’m going out for a kill, be back in twenty minutes...”

... made me laugh out loud! All of your stuff is excellent, but this was my favorite review in a long time.

Thanks! Happy you enjoyed it. Appreciate that. We've been always thinking about how Out For A Kill is such a ridiculous title.

This was actually the very first Seagal film I ever saw(in fact it's kind of the film that started my journey into watching action films), the title is silly yes, as is the rest of the film, but it's still diverting enough to keep my attention, unlike say Out Of Reach, which was rather dull.

Out Of Reach was slow at times, but it did have the scene were Seagal reads messages via sushi! Haha.

Haha! That's hilarious. That makes sense for a Seagal movie. The script are basically bleeps and boops anyway. Haha.

For me, the reason to love this movie is the beginning. First, Seagal plays an ex-CIA badass turned archeology professor which is surely a first in cinematic history.

But the bit I like the best is just how much motivation his character is given. They kill his friend, they lock him up for a crime he didn't commit, and then as if that wasn't enough for him to want revenge they kill his family. Normally, just one of these is enough to send Big Steve on a morally dubious mission of violence, but he seems to have been given a longer fuse in this one.

Good point. With all those reasons, he's definitely out for a kill! Haha.