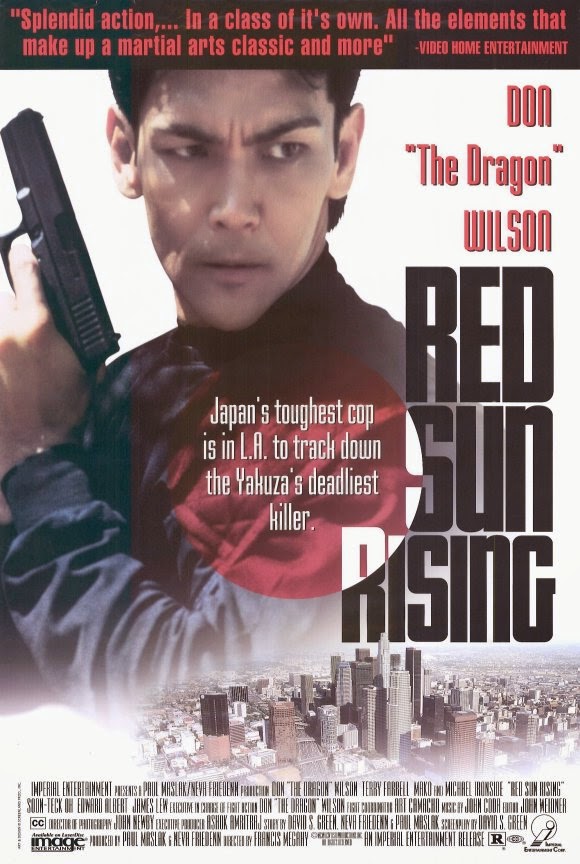 Thomas Hoshino (Wilson) is a half American-half Japanese cop with a strong sense of honor. When his partner is killed whilst in Japan, he tracks the baddies responsible all the way to Los Angeles.  It turns out the main culprit is no ordinary baddie. Jaho (Lew) is a supremely evil monster with a very special weapon literally at his fingertips - the Death Touch. In order to combat against this supposed Death Touch, Hoshino reaches out to an old associate, Iga (Mako) and he trains him in not just Martial Arts but magic powers. Hoshino also ends up working alongside no-nonsense L.A. cop Karen Ryder (Farrell). Ryder comes into the picture because a gang war is brewing between street gangs the 72nd St. Icemen and the Malitos.

Could Jaho have anything to do with the impending gang throwdown? Can it be stopped? Can anything stop...the DEATH TOUCH? Find out today!

We believe Red Sun Rising: The Legend Of The Death Touch (if you include that on-screen subtitle) is one of Don The Dragon Wilson’s best movies. Could it be a coincidence that when he escaped the clutches of Roger Corman, his best work appears? There have been other movies that revolve around, or at least mention some kind of “Death Touch” (also sometimes called the “Dim Mak”) but here it receives what has to be its ultimate cinematic representation. Add some training sequences and an all-star B-movie cast and it’s pretty tough to go wrong. 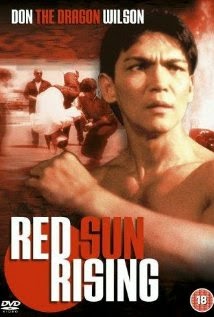 James Lew (he gets an “Introducing” credit here although he’d been in plenty of movies before this) puts in a hiss-worthy bad guy performance, with Soon-Tek Oh backing him up. Michael Ironside as Ryder’s Captain does pretty much a sit-down role, but it’s one of the better ones we can remember. Ken Davitian is on hand as the prerequisite Wacky Taxi Driver, and Stoney Jackson has a pretty small but worthwhile role as Gamal.

Edward Albert of Kenderson!!!!!!! fame has a low-key role that perhaps should have been bigger, but that’s the problem with these “all-star” movies. Not everyone gets enough time in the sun. But for once, Mako is not the victim of that. His role is meaty and substantial, with plenty of screen time. Don the Dragon is delightfully wooden as always, and it should also be mentioned that Art Camacho has a small role as a Malito. Perhaps stealing the movie was Terry Farrell as Ryder. We weren’t familiar with her before, but she’s tough, smart and funny in equal measure. Farrell should have done more material like this.

Wilson, besides merely starring in the movie, receives the credit “Executive In Charge Of Fight Action”. Who else can claim that distinction? Providing his foil is Mako, and when we first see him, although he is the wise sensei, he is wearing a shirt that says “I am the big banana” with a large picture of a banana, with matching banana-print pants! We applaud the filmmakers for not going with the typical cliches. He’s more intelligible than usual and he puts in a bright, happy performance.

Ryder and Hoshino go through the typical American vs. Japanese “culture clash” that we’ve seen before but it’s usually played for laughs. As for the training sequences, they could have used a pounding, anthemic rock song, but maybe they were taking a different tack this time. And seeing as how this was the mid-90’s and Street Fighter and its Ha-Do-Ken was huge, this is finally the movie to see it in. Interestingly enough, the Street Fighter (1994) movie came out the same year.

Seeing as how this is a “gang war” movie as well as a “death touch” movie with a mega cast, it really tries to be all things to all people and basically succeeds.

Featuring a title song (we always love those) by Angela Carole Brown and Phil Settle, Red Sun Rising is a very good example of what Don The Dragon can do and would be a good starting place for people not familiar with him. It’s also a good example of 90’s video store action that’s worth seeing.

Also check out write-ups from our buddies, The Video Vacuum and DTVC!
Posted by Ty at 17.4.14

Yeah, one of his best. Bought the VHS because of the cast.

It does have a killer cast. Need to pick up a copy soon.