Kyle Connors (The Dragon) is an Interpol agent who is somewhat on the edge. During a “night at the museum” bust where he and his partner are planning to take down some baddies, Connors’ partner is killed thanks to the unadulterated evil of Davaad (Lurie). In a quest for vengeance, Connors travels to India because that’s where he believes Davaad and his evil empire are located.

While Davaad is your classic monosyllabic meathead, he somehow controls a squadron of Indian doctors and scientists who are working on a code to decrypt anything on any computer, ever. Meanwhile, Connors has his hands full not just fighting goons, but with two mysterious women: Callista Sinclair (McClure) who is supposedly some  kind of British special agent, and Shalimar (Bhatnagar), an Indian beauty as stunning as the Soul Train act from whence she was named. But who can he trust? With twists and turns aplenty, it’s going to take everything Connors has got to tame this Cobra...

Operation Cobra is an amusing Don The Dragon romp that doesn’t take itself too seriously or go on too long. It provides light thrills and is pretty enjoyable, with all the classic cliches we’ve come to sink into like a warm bath.

While it does involve  “The Disc” (something that characters in these B movies always seem to be searching for), and features many dumb moments that act as glue that holds the story together between action scenes (which luckily are plentiful), the fact that the movie is set in India provides interesting and different atmosphere. Director Fred Olen Ray’s long career is spotty at best, but this proves to be the best action effort we’ve seen from him to date. 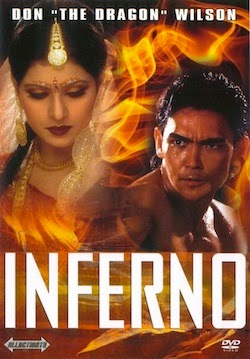 This is a good role for Don, as it puts him in a James Bond-like adventurer role. Perhaps a lot of the aforementioned dumbness is a by-product of having Evan Lurie be the main bad guy. That’s not a slam on Lurie, we definitely love his work (if we didn’t, how do you explain the fact that we’ve seen more of his movies than perhaps anyone on the planet?) but come on. The guy’s head simply oozes meat maybe more than anyone else who appeared in 90’s DTV’s on a regular basis. That said, his jumping ability is pretty impressive in this particular outing. Perhaps his being a solid meathead gives him better equilibrium than other humans.

As if the fight between Evan and Don wasn’t enough for you in Ring of Fire II (1993), here they go for a second round. So many DTV personalities fight each other numerous times, but there are combinations that never happened. How about a fight between Don The Dragon and Lorenzo Lamas? Or maybe Evan Lurie and Matthias Hues? Or we could get really crazy and dream up Harrison Muller Jr. Vs. Ron Marchini. The combinations are truly endless...

Besides trying to find “The Disc” and characters being Ex-Marines, another staple that we love to see is the club scene. We both love the 70’s-80’s-90’s discotheque and the one here is a real winner, thanks to some outstanding background dancers. Watch out for it.

In the final analysis, Operation Cobra might be one of the better Don outings out there. It balances the dumb with the slightly-less-dumb in a nice way and we don’t have too many complaints.

Great review! I agree completely. This was one of The Dragon's and Fred Olen Ray's best movies. I read somewhere that the whole cast and crew were suffering from food poisoning during the filming, which makes the jumping kicks even more impressive.

Thanks! That's great they endured food poisoning and still did the martial arts! That's dedication. Haha.

Ah, the "disc". I'd love to do some investigative work to find out exactly when characters stopped looking for "discs" and we made the switch over to 'flash drive' type devices.

I hope the IT industry works closely with filmmakers to ensure that they stay up to date on technology to make sure that cops-on-the-edge everywhere aren't looking for redundant and out-moded storage devices.

That information is on disc somewhere. Authorities are currently looking for it. Haha.