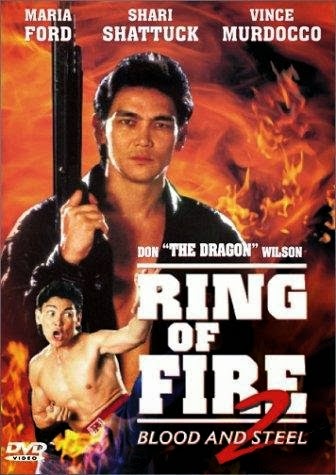 Doctor Johnny Woo (The Dragon) returns. This time around, he’s engaged to Julie (Ford) and looking forward to a quiet life together. That is, until Julie is kidnapped and stolen away to an underground society called...The Underground. It’s its own separate city, with its own rules, laws and gangs. No one from the surface world ever goes down there, and guns are not allowed. But Johnny ventures down there anyway and battles away for his wife-to-be. Along the way he meets Ernest (Richardson), an embittered vet, who ends up helping him. It turns out the main baddies in The Underground are Kalin (Jacklin) and his lackey Predator (Lurie). They stage Punchfighting matches for fun and they want Johnny to face off against them. Backing up Johnny is his crew from the previous film, which includes the return of comic relief Kwong (Lee). Will Johnny and his compatriots rescue Julie and make it back to the surface world? Find out today!

Ring of Fire II certainly doesn’t skimp on the action: there are constant fights, blow-ups, car chases, broken glass, and even some Punchfighting. It keeps up like this with a good pace until right before the climax, when it starts to drag, and the repetition of it all becomes brain-numbing. But in the set and costume design, there is a lot of creativity which sets it apart. Sure, the basic plot is a melange of The Warriors (1979), Escape From New York (1981) and The Running Man (1987), but weird sets and the bizarre costumes of gangs like The Avengers, Shadow Warriors, Nightrats and personal favorites The Garbage Gang keep things nicely different. The lighting can also be odd, but a lot of the movie is too dark. So, visually not only is it different from the previous Ring of Fire installment, but it’s different from most other movies of this kind. 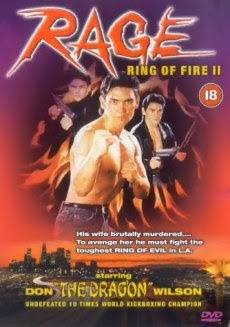 Cleverly, the first image of the movie is a “Ring” - but it’s Julie’s engagement ring. Sadly Maria Ford does almost nothing in this movie. The cast is very impressive - Eric Lee is up to his classic wacky antics, Evan Lurie shows his time-honored Meatheadyness, and Ian Jacklin wears a metal cummerbund. As in Firepower (1993), Gerald Okamura is here but you can barely see him. At least he’s credited this time. Art Camacho is also here as a generic gang member. The great Sy Richardson gives the movie much-needed weight, and lest we forget Vince Murdocco and Michael Delano. Both in front of and behind the camera, the cast and crew give it that PM style we all know and love. 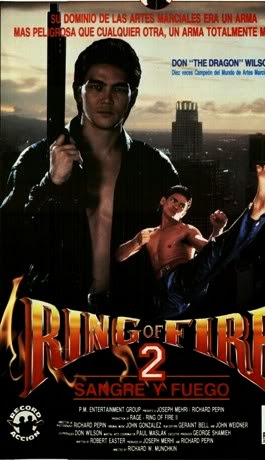 Happily, this movie is not at all a retread of the first, which in lesser hands it easily could have been, and we give them credit for that. There’s also no courting or love story, because that was taken care of in the first film. Unfortunately, there is some filler, and the Punchfighting subplot is pointless and goes nowhere. The baddies just beat up on nameless, unseeable goons and there is no rhyme or reason to it. There’s no escalation in fight prowess. It’s seemingly there just to fill time. We love a good Punchfighter, but that’s not really what this movie is and it feels like an afterthought. Adding to The Warriors feel, there’s a radio DJ who periodically pops up to give updates. But those of you who have seen Riot (1997) and Fists of Blood (1988) will see there is also a (no pun intended) underground influence, as well as a more mainstream influence to the proceedings.

Finally, it should be noted that Don is shirtless for most of the movie’s running time. He, of course, loses his shirt in a fight when he first enters the underground, and he must go through his entire odyssey bare-chested. It’s worth noting because it’s the longest single instance of unnecessary shirtlessness we’ve seen to date. There’s NO reason for it, especially considering how long it lasts.

Ring of Fire II may have its flaws, but it’s basically an enjoyable movie. It’s not a title you need to rush out right now and buy, but if you see it somewhere, pick it up.

What amazes me most about this website is its level of consistency. It constantly produces well-written content that paints a vivid picture of a reviewed movie, even if I have never seen it.

It is a pleasure being at work and "reading" the movies you describe.

I don't know how much time and effort goes into these reviews, but I want you to know I greatly appreciate them.

Thanks again, and please keep up the great work!

This film and part 3 are both fantastic films, there should be more films with an "underground" setting. New York and Las Vegas both have massive networks of underground tunnels which would make a great setting for a movie/TV show/video game.

Joe: Thanks so much! We really appreciate that. That is our goal. We put a lot of thought and effort in our reviews for readers like you. You're welcome!

Venom: Totally agree, underground is underexplored in movies. Part 3 will be posted this Wednesday.

This is a film I watched years ago and when I say years, I mean close to 20. I don't remember the movie except that it sort of had a Warriors rip off feel to it as well as a bunch of mullets. My only sadness about the death of the video store is that actually getting your hands on these films are hard. This and the other two would definitely make for fun bad movie night.

Gotta love the mullets! Haha. That was the best part about the video store, finding gems like this and other wacky random action movies based on the title or cover. Totally agree, perfect triple feature for bad movie night.

Parts 2 and 3 were huge improvements compared with part 1, which had too much lovey-dovey stuff. They are both solid action movies.

I completely agree with Joe Armstrong that your reviews are excellently written and very funny. The IMDB is full of illegible drivel, but funnily enough, I found your site through your postings on IMDB.

Also in the midwest where I live, Family Video(the largest independently owned video store chain) is pretty prevalent and they carry a lot of the more obscure films on DVD, that's where I found a lot of PM films like The Sweeper, Rage, Running Red, Epicenter, Riot, Last Man Standing etc.

Roger: Thanks for the nice words. We really appreciate it. It's comments like yours and Joe's that keep us going.

Venom: Same here, we've heard about Scarecrow for years and always wanted to visit but we live on the opposite side of the country. Haha. That's cool that Family Video is still around and has the obscure action PM movies we all love. We don't have a Family Video in CT, but we have a store called Video 7, which is one of the last of the mom and pop stores.