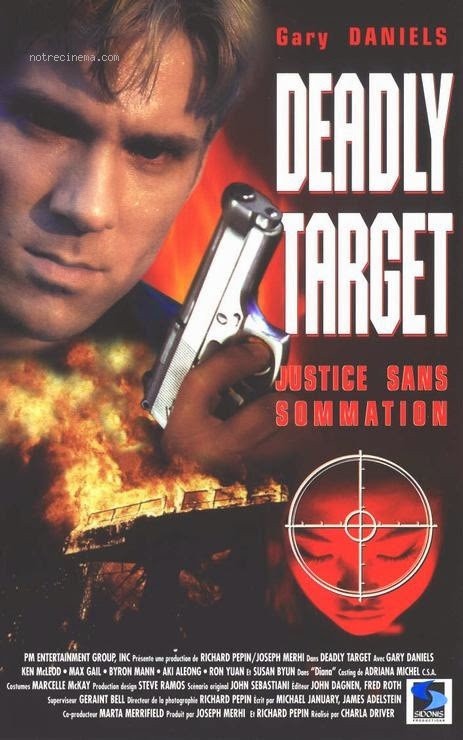 
Charles “Charlie” Prince (Daniels) is a Hong Kong cop who travels to L.A. in order to bring arch-criminal Chang (Mann) back to his home country to face justice. The tenacious Prince will stop at nothing to achieve his goal, because the arrest of Chang is personal to him. His “cowboy” attitude initially rubs his temporary partner Jenson (McLeod) the wrong way, but of course they learn to work together. Naturally both men are Martial Arts masters, which surely is a coincidence. Somehow Prince finds time for romance with Diana Tang (Byun), but Chang and his army of goons are going to prove difficult to stop: their criminal network is vast and their firepower is huge. Will Prince and Jenson finally achieve their goal?

While Deadly Target has all the hallmarks of mid-90’s PM that we’ve come to know and love, such as constant Martial Arts fights, mindless shooting, car chases/cars flipping and blowing up in the middle of the street, exploding helicopters, and more mindless shooting, an element seems to be missing here. It’s not in the top tier, with movies such as Rage, Last Man Standing, Recoil and The Sweeper, and it doesn’t have the nutty/wacky factor of Wilding or Night Of The Kickfighters, but it’s a serviceable outing nonetheless, most likely, once again, because of the charm of Gary Daniels. While we’ve seen almost all of Ken McLeod’s filmography, somehow Daniels always steals the show.

The presence of Susan Byun as the love interest was basically pointless, but if not for her, there would be almost no women in the whole production. Max Gail as Captain Peters was the classic WYC (White Yelling Chief) - too bad they couldn’t get his lookalike Peter Boyle to do the role. Ron Yuan, Aki Aleong, and Al Leong fill out the cast of familiar faces and names (well, if you watch a lot of 90’s DTV action product). 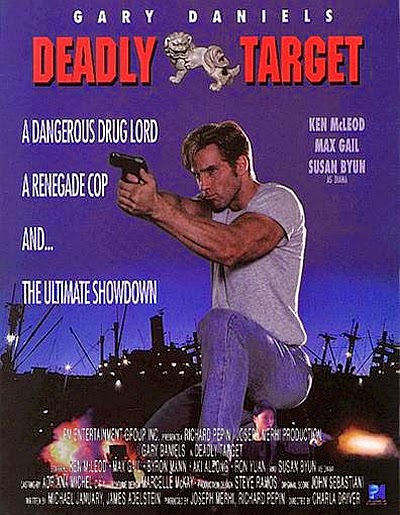 While that comfortable feeling of “dumbness” is achieved very quickly, what with Daniels beating up many people while wearing a leather jacket in an extended fight scene early in the film, during that same sequence, not only is there mindless shooting, but it looks like GENERIC shooting! It's just footage of a guy shooting a machine gun that could have been taken from any source was spliced in to fire mis-matchedly at Gary Daniels. We’re not saying that’s the case, but director Driver should have taken more care to make sure it didn’t look that way. But on the other hand, it’s really funny and we laughed, so all’s well that ends well.

Interestingly, while Charla Driver has served in just about every capacity a person can while working on a film during her years with PM, this is the only movie she directed. Maybe that’s why the vibe is a little different, while all the main elements of PM are present and accounted for.

At least during the fight scenes, there appears to be some sort of baby powder on people’s heads, so when they get kicked or punched, the light picks up the flying particles. Also, while many movies have the time-honored sax on the soundtrack, Deadly Target bests them all by having a live sax player. Not only did he provide the smooth jams, but we can actually see what he looks like.

Additionally, Gary Daniels proves once and for all that you’ve achieved true awesomeness as a human being if you can wear a vest with no shirt underneath as casual, everyday wear. Your body, your muscles and your confidence level must be so unimaginably high, you can pull it off. See also: Lorenzo Lamas. Finally, there’s an old Chinese gangster in the film named Mr. Zao. Presumably his first name is Po Po and he was named after the classic Kevin Federline song of the same name. Yes, the old man was named after the song. Not ridiculous at all. Think about it.

In the end, Deadly Target does provide all the kicking, punching, shooting, Gary Daniels, and blow-ups that fans want, but lacks that little bit of extra something to tie it all together. It’s still worth seeing though.

You're absolutely right! This is a great movie, but connoisseurs will notice that something je ne sais quoi is missing. It's not as good as the three Rs of Daniels old school: Recoil, Riot and Rage.

German VHS is called "Firezone". Good action with very good fights. some explosions, some shoot-out, but mostly MA. Watched more than once.

A lot of PM's action scenes ended up as stock footage in the L.A. HEAT TV series, so don't be surprised if some of them here look like they're standing alone. I imagine they were designed to be reused in future projects.

Roger: I guess they always can't always be as good as the Rs, but it's solid enough.

Harry: We agree. That's a better title than Deadly Target.

Marty: Haha. They always re-use they're classic car flipping in the middle of the street stunt. Part of making a low budget movie is saving money.

This is a pretty fun Daniels film, liked Susan Byun, she was also pretty good in that Troma film Sgt. Kabukiman

Firezone is a better title.

One film that had a lot of stock footage of action scenes from other films with the Dolph Lundgren film Direct Contact, that surprised me because I didn't recognize them at the time I was watching the movie, it was only after someone pointed it out that I realized it.

Totally agree. Good Daniels flick. Forgot that she was in Sgt. Kabukiman. She should've been in more movies.