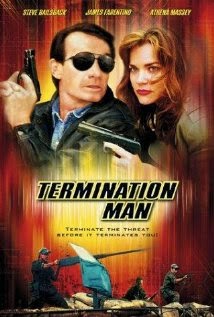 
In the fight against Serbian terrorists, there's only one man who is capable enough to get the job done: the Terminator! Sorry, excuse our faux pas - Termination MAN, a bored, apathetic individual named Dylan Pope (Railsback). Apparently Pope has been endowed with special skills and abilities by the government, but they mainly consist of being able to run fast, which he never actually employs against the baddies.

He teams up with contacts Delilah Shane (Massey) and Ted Marks (Lottimer) and travels to foreign lands in the war against an obese beardo named Yurdovich (Ilyin). While this supposed terrorist evildoer appears to be committing jihad against fruits, vegetables and exercise, and is all the more jolly for it, still he's the greatest threat this planet has ever seen, and truly only the blase Dylan "Termination Man" Pope can terminate the threat. But will he wake up in time to do it?

Termination Man - which is not at all a ripoff title intended to confuse inattentive and distracted video store patrons - is certainly shelf-filler at said video stores, and is undoubtedly junky and wildly stupid. But the overall vibe of silliness carries much of the movie (but not all of it, unfortunately).

Most of the dotty daftness that the movie projects is due to Steve Railsback, and thank goodness. Out of all the potential action stars (or unknowns) the filmmakers could have chosen, clearly their only choice was Railsback, who was born in 1945 and thus was around 53 years old at the time of filming. Perhaps they had seen his Private Wars (1993) of a few years previous, and figured they had to get him. His listless "performance" rivals Burt Reynolds at his most blatant uncaring, and this form of Railsback action, or Railsbacktion, was surely set to be the wave of the future. 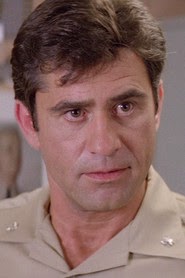 Especially in this movie, Railsback seems like he could be Ron Marchini's brother. We would love to know what he was thinking as he wandered his way through it. His utter lack of energy is a double-edged sword here. On the one hand, it's really funny. But on the other, it slows things down considerably, and it really hits home around an hour in, where things just drag.

But on the whole, the film is filled with nonsense, from the gadgets that Termination Man, or TerMan, has, that were given to him by Cain (Farentino), who plays a gravelly-voiced version of Q from the James Bond movies. One of them is a camera. Its secret weapon: it flashes! Whoa! You get the idea. On top of that, there's mindless shooting, both near to, and far away from, fruit carts, and the fact that Delilah just can't resist TerMan's charmless charm. Well, for TerMan, it was either be a fearless/emotionless government agent, or a Wal-Mart greeter. And I hear the ladies love their friendly, helpful ways.

Correct us if we're wrong, but the Corman factory has never produced a truly awesome and worthwhile action movie. But in the meantime while you're combing through his back catalog, if you're willing to laugh and not take it so seriously, Termination Man isn't that bad. But be forewarned of the slow moments.

Reviews like this make me repeatedly check this site.

I have never seen this movie, nor will I probably ever encounter it unless I hit the perfect storm of VHS dealers at a flea market.

The time you guys took to watch it, and then write and edit a coherent, funny review was well appreciated. Please know that.

I suspect I enjoyed reading about this than more than I ever could watching the film.

That is very nice of you to say and comments like yours keep us going and looking for new action oddities.

Thanks again, Joe. What we say is truly appreciated.