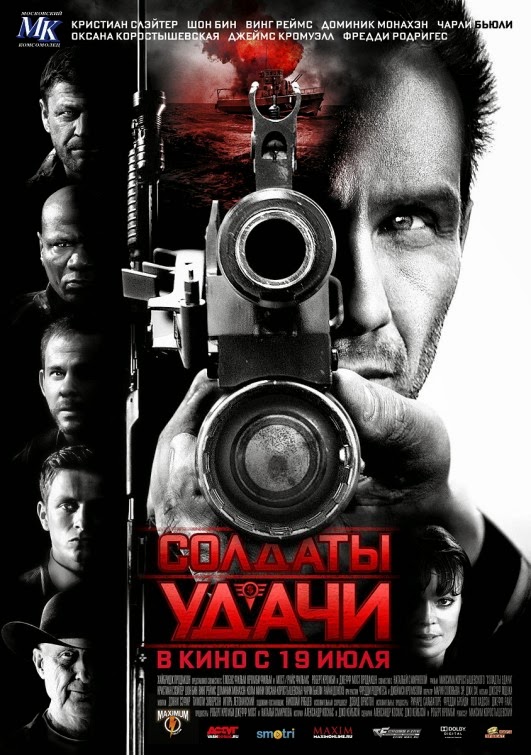 Craig McCenzie (Slater), is a former Special Ops soldier and military-grade badass, despite the fact that his own name seems to be spelled incorrectly. Hired by a mysterious woman named Cecilia (Korostyshevskaya), he's reluctantly pulled into the time-honored "one last op" when he's forced to take a bunch of "weekend warriors" on a mission to take down an evil baddie named Mason (Meaney).

Just why McCenzie needs to take inexperienced non-soldiers on an extremely dangerous mission wasn't clearly explained. As part of a combat-simulation vacation called, obviously, "Soldiers of Fortune", rich knowitalls bicker and squabble while McCenzie rolls his eyes and tries his best to whip them into combat readiness. Among his new charges are a young video game designer named Sin (Monaghan), a rich playboy named Dimidov (Bean), an African arms dealer named Grimaud, but nicknamed "The Grim Reaper" (Rhames), obnoxious Wall Streeter Vanderbeer (Bewley) and rich older man Haussman (Cromwell). Can this wacky cast of characters work together and get the job done?

Soldiers Of Fortune is a movie out of sync with its time and place. It seems like it would be more comfortable sharing video store shelf space next to Desert Thunder (1999) and Stealth Fighter (1999) in the 90's. The only thing that really ties it to the 2000's are a couple of Bin Laden references (making this movie the original Zero Dark Thirty, 2012).

Our beloved Christian Slater could have played the same role even then, though his beard-stubbly grizzledness does add much to his leadership abilities. He's not Gleaming the Cube anymore, he's "Action Slater" as you've never seen him before. He does a lot of running, jumping, rolling around, and shooting people, and presumably killing people, with a weapon that looks suspiciously like a paintball gun. He also spouts a lot of silly, country-fried aphorisms that wouldn't be out of place as Toby Keith lyrics. Despite the impressive cast overall, this movie is clearly carried by Slater on his back much like a wounded enemy combatant in a war zone. 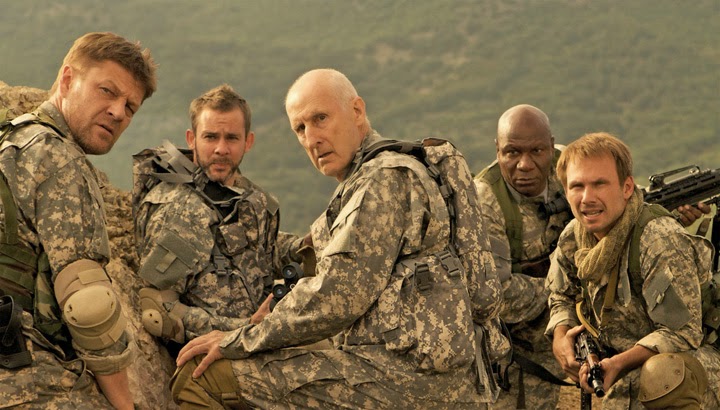 Important things you need to know about Soldiers Of Fortune: 1. visually, it looks like it was produced by Nu-Image. 2. We think it was supposed to be a comedy, so imagine if Nu-Image tried to make a movie filled with yuks. The result is a film filled with dumbness and mediocrity, but you already knew that, didn't you? Even the title hints at the lack of originality within.

You'd think the non-Slater cast would make the water rise and float this particular boat, but no, it's a bunch of stereotyped roles that don't really inspire the viewer with any real emotions. Monaghan plays the young punk whippersnapper obsessed with video games, Rhames does the African accent he did in Dangerous Ground (1997), Bewley plays the obvious, expected cliche of the heartless money broker, and Bean and Cromwell swim against the tide and do their best, but fail to leave a real impression. 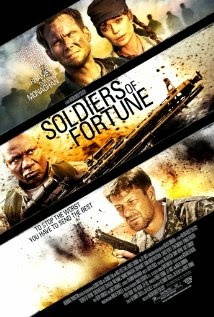 But sometimes the cliches work in the movie's favor, such as the classics "Ex-Special Forces", "One Last Op", and walking away from an explosion in slow motion. Not forgetting of course about the final confrontation between Slater and Meaney (I never figured I'd have to type that...) where we see some prime examples of not just Slater-Fu, but Colm Meaney-Fu. Yeah.

It also features the same song from Beatdown (2010), Tommy Fields’ immortal “Wildfire In the Streets” (which is kind of an odd choice, as there are no real “streets” to speak of here, it’s mainly an island setting, nor is there a wildfire, but maybe there’s a cheap bank of songs DTV producers can pull from. Tommy Fields truly is the Robert Tepper of the DTV era). So just to recap what was said earlier, Soldiers of Fortune is typical video store fodder in the era of no video stores.

I thought this one was really good, thought all the actors did a pretty good job, particularly Rhames and Slater, also liked Oksana.


BTW there's a really rare film that i'm curious to see you review called Inner Action http://www.imdb.com/title/tt0119370/
Could you have your friend see if it's on Cinemageddon?

We really liked Slater in this. He should stick to more action roles. Will try to find Inner Action.