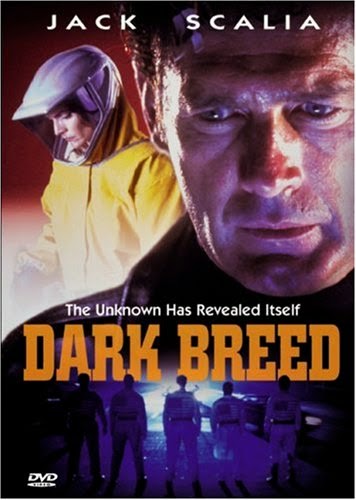 
Nick Saxon (Scalia) is an ex-Special Forces Vietnam veteran (of course), so when a crew of astronauts returns infected with an alien virus, naturally Saxon is the first person the government calls to stop the spread of these body-snatching interlopers (wonder where they got that idea...). So Saxon and his team are working on stopping the astro-nuts, who predated the diaper-wearing astro-nut from the news of a few years ago by many years. But it’s personal for Scalia, sorry, Saxon, because his buddy Joseph Shay (Banks) is one of the unfortunate astronauts taken over by an alien presence. Will Saxon don his Denim and Leather and come out victorious against the alien baddies?

Judging by the fact that most of the scenes are too dark to see, Dark Breed is indeed an apt title. Or maybe they could have called it Dark Screen. Which leads us to the schizophrenic nature of this movie. The sci-fi scenes are dark (as if we haven’t made that sufficiently clear yet), almost as if to hide their shame at making a sci-fi slog.

But as for the action scenes, most of them are shot in daylight and are clearly and appropriately lit. That’s normally the way with PM, but maybe they were experimenting with the “moodier” feel of the day, which was ahead of its time, as many movies and TV shows are severely underlit today.  So if you’re interested in seeing PM experiment with darkness, here is certainly a place to check that out. But we can’t honestly say we’re on board with it this time. Thank goodness for the plentiful muzzle flashes and blow-ups, because they provide the only light in many scenes.

But the action is classic PM, with high-quality explosions, plenty of car stunts, and much gun-shooting. When it settles back into sci-fi territory, the movie inevitably slows down.  But we’re such PM fans, we had to see this movie, even though we don’t like sci-fi slogs.

But scenes like the highway chase where Scalia is riding along the back of a truck on an upturned satellite dish are vintage PM and start to turn the movie back in good graces. The scene is reminiscent of PM classic Last Man Standing (1996) and easily could have appeared in that gem. Plus you can actually see the scene, so it stands out from a lot of the rest of the proceedings. But the movie as a whole is a sci-fi actioner, kind of in the vein of Peacemaker (1990). So if you liked that, you might like this. 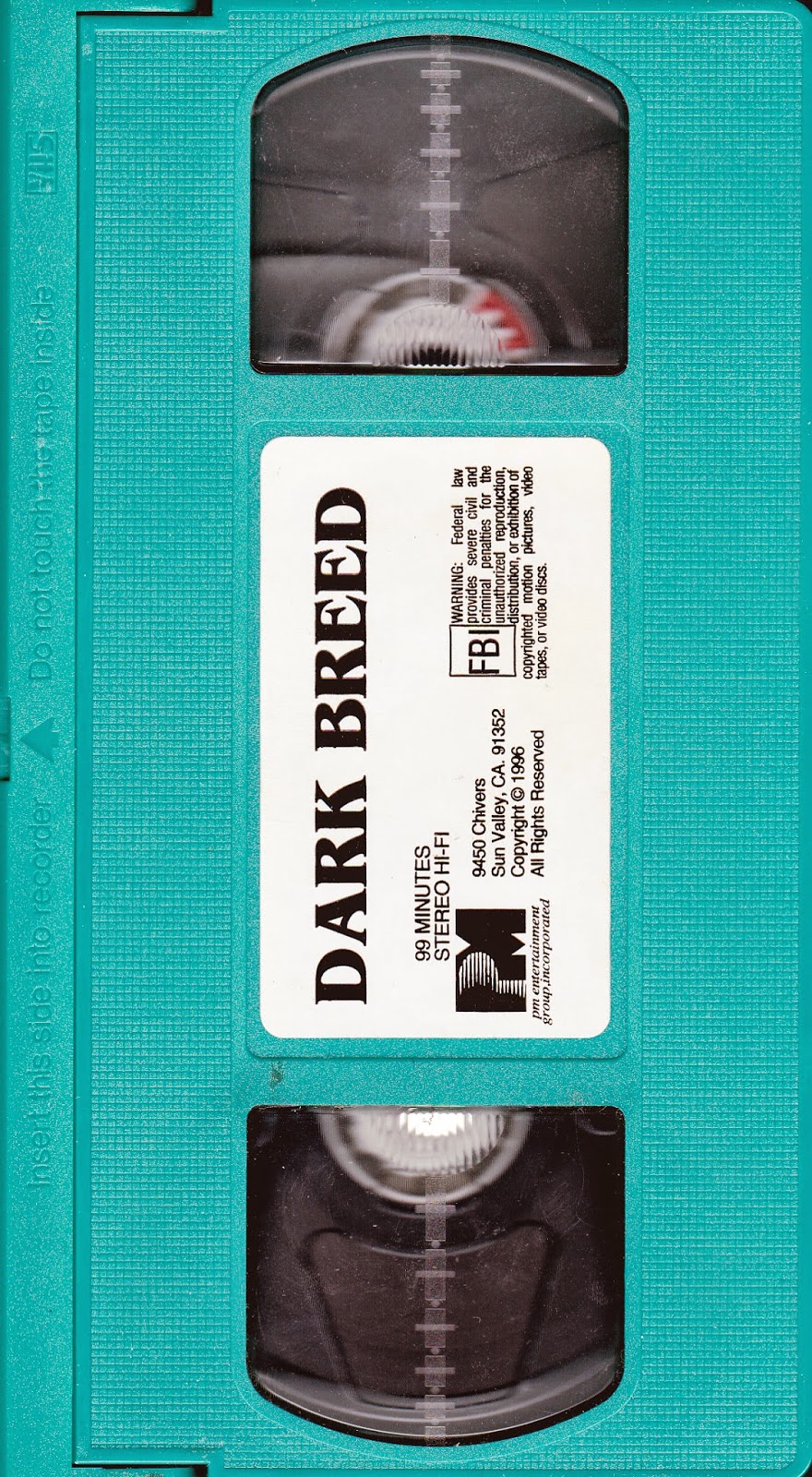 Most of the dialogue consists of characters saying other characters’ names repeatedly, almost reaching Airplane! (1980) levels at times. Of course, that’s not when the aliens start making pig noises. Even though the aliens are supposed to be scary and malevolent, they sound like a mash up of Babe, Gordy and Arnold Ziffel in the midst of a slop fight.

In other cast news Sal Landi, who has been in plenty of movies reviewed on this site, here plays “Zim” Zimmerman, also predating a certain news story. And fan favorite George “Buck” Flower even finds time to stop by in the midst of all the craziness. Tying it all together is Scalia, who looks like a stone statue carved of Treat Williams.

In the end, this movie is at war with itself. It’s sci-fi sloggery vs. tried-and-true action. If you don’t mind your action punctuated by literally dark, boring scenes (or if you genuinely like sci-fi, which is also a possibility), you might be able to extract some enjoyment from Dark Breed.

This film didn't seem that dark to me, I had no real problems understanding what was going on.

I also heard some people complain Alien Vs. Predator: Requiem was too dark as well, but I had no problems with that one either, guess I just have really good eyesight LOL.

One film that I remember being a little too dark was "Se7en", couldn't see a damn thing half the time, Brad Pitt even complained about it in the commentary.

Haha, If Brad Pitt is complaining about Seven being too dark to see, that's not good!

Another similar PM/Pepin/Scalia sci-fi/action film was The Silencers. Only the action elements really work. What I want to know is, why was the VHS cassette blue?

Good question. We always loved gimmick-colored tapes. A Time To Die has a red tape. We didn't scan it at the time.

What other colored tapes do you know of?

Hmm. Not sure. It would be cool if that had a list online.