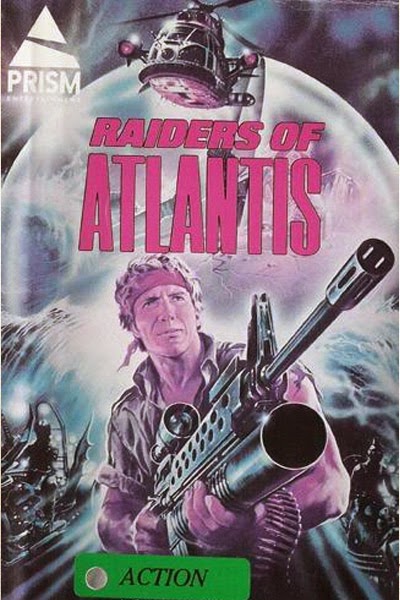 
A group of scientists, led by the nerdy Saunders (Hilton) and the attractive Dr. Rollins (Scola), go on a seafaring expedition and come across an old sunken relic they believe to be an artifact from Atlantis. While they’re trying to figure out the significance of this skull-faced totem, a freak storm strands them on a Caribbean island. They then realize they’re in a whole heap of trouble, because the island is dominated by murderous punks who are descendents of the original Atlanteans. Naturally they want to take over the world, and are led by a guy who not just worships a crystal skull, but actually wears the skull on his head! Such is his devotion to crystal skulls, his name is Crystal Skull (Baron).

Just when the scientists start to despair, a pair of tough Vietnam vets, Mike Ross (Connelly) and Washington (King) come to their rescue and put their knowledge of weaponry and survival to good use. Will they defeat the punks? Or will the baddies from Atlantis rise again? Find out today!

After getting off to a pretty slow start, The Raiders of Atlantis eventually kicks into gear and is a rollicking good time. Director Ruggero Deodato should be more well known for his action output, as action has infused much of his work in his long career, everything from Live Like A Cop, Die Like A Man (1976), to Cut and Run (1985) to The Barbarians (1987) - but his reputation is such that his name is synonymous with Italian horror. Nevertheless, Deodato delivers the goods with this, a sort of cross between  the Indiana Jones movies (and he predated the crystal skull sequel by many years!), the A-Team and The Road Warrior (1981), among other “influences”. By far the best part of this movie are the punks.

The movie truly starts when they arrive on the scene. They have awesome outfits and vehicles. Just like how people in Cuba today are driving around in 50’s Fords and Chevys, here too the Atlanteans have the classic cars, but in their case, drills and spikes are attached to them. 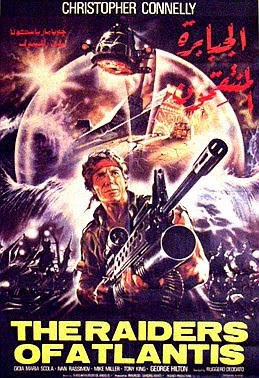 Deodato assembled a top-notch cast for this, an “A-Team”, if you will. Heh heh. Christopher Connelly is great as the leader with the raspy voice. The man can truly turn a phrase like no one else. He can call you a “Dirtball” with style and aplomb. Tony King is completely winning as his sidekick - it’s largely because you get behind him that you want our heroes to succeed. Baron is suitably menacing as the guy who wears the crystal skull, George Hilton plays against type as the dorky scientist with the stylish shorts, and Ivan Rassimov, Michele Soavi, and Philippine-shot movie regular Mike Monty appear as well. So you can’t ask for more in that department. The movie also scores points because the music is done by the DeAngelis brothers (using their usual pseudonym Oliver Onions), and the movie is set in the future, “1994”, which is now the past, which we always love to see.

Add some shooting, blow-ups, exploding helicopters,
“pew-pew” lasers, and a high body count (including what we call a “fan favorite death”), and you have a complete night of entertainment in front of your VCR.

Released on VHS by Prism in the U.S. back in the video store days, and now available as part of the “Grindhouse Experience vol.2” DVD set (which is out of print but still cheaply found on Amazon and elsewhere as of this writing), The Raiders of Atlantis provides a solid dose of Italian-made, Philippines-shot 80’s action goodness.

Also check out a write-up from our buddies Ed's Pop Culture Shack and  The Video Vacuum!

You know I LOVE THIS MOVIE!!
Great review guys!

I reviewed this a few years ago for my blog. Good stuff.

RobotGEEK: Thanks we do too. Love the kind words.

Ed: Will link your review shortly.

Tops film. I have a custom DVD made from the German widescreen print and English VHS audio - it's great!

Explosive: Awesome! You have a killer copy of it.

Great name, good movie, smallest army ever...
Seeing as this was a movie about Atlantis, Christopher Connelly missed out on using his classic "suckfish" line.

He definitely forgot. That was an oversight. Suckfish should go to the insult hall of fame with Butthorn from Busey's Bulletproof.

Thanks for the tip off about the exploding helicopter. We'll add this to that illustrious canon of films.

No problem, buddy! It definitely belongs on the list.