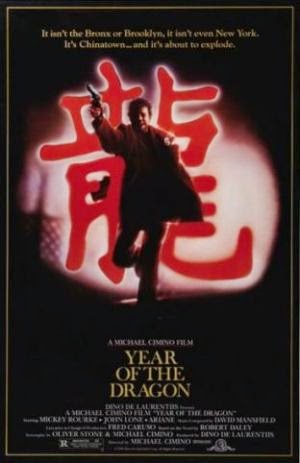 
Stanley White (Rourke) is a Cop On The Edge (and Vietnam vet) in New York City. Assigned to Chinatown, he discovers the area is rife with gangs demanding protection money from shopkeepers, illegal gambling, and other activities that are against the law - U.S. law. When White confronts the leaders of the community, he is informed that their traditions are thousands of years old, and he can’t just waltz in and change things.

But then the violence spins out of control and the murder rate rises. The headstrong Stanley just won’t tolerate their growing domination. Meanwhile, Stanley finds himself growing apart not just from his colleagues on the police force, but from his wife Connie (Kava). He develops a relationship with Asian TV reporter Tracy Tzu (Ariane), and when she gets caught in the middle between Stanley and his growing sense of vengeance to crime leader Joey Tai (Lone), fireworks - literally - occur. Will Stanley clean up the streets of Chinatown? Find out today!

Michael Cimino is one of the only currently-living masters of American cinema, and with a screenplay co-written by him and Oliver Stone, in a movie produced by Dino De Laurentiis, you know you’re going to get a high-quality production. It’s an expertly-shot and acted film as well, and with some of the themes it deals with, it was ahead of its time in 1985.

It’s filled with intense moments, and its length and pace bespeak its status as an epic crime drama, which would make sense as the novel it’s based from was written by Robert Daley of Prince of the City (1981) fame. So we applaud that it did not cave in to the trend of “MTV editing”, and it comes out smelling like a rose in the 21st century. 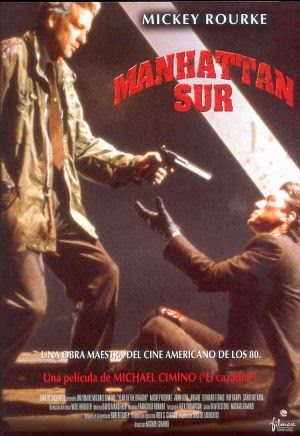 Mickey Rourke was the ideal choice to play Stanley. This was at the height of his initial fame in the 80’s, and he’s looking young and trim. Stanley, despite appearing, on the surface, like a brash, insensitive, politically-incorrect brute, actually has a highly sensitive soul and a powerful and overriding sense of morality. But he’s caught up in a corrupt world so he deals with it the best he can. Rourke, one of the most talented actors currently working today, can expertly play that subtlety and complexity. Plus not only does he have cool hair, he has a cool hat, and when he’s not wearing his cool hat, the coolness of his hair can shine, and his hair seems to get cooler as the movie goes along. 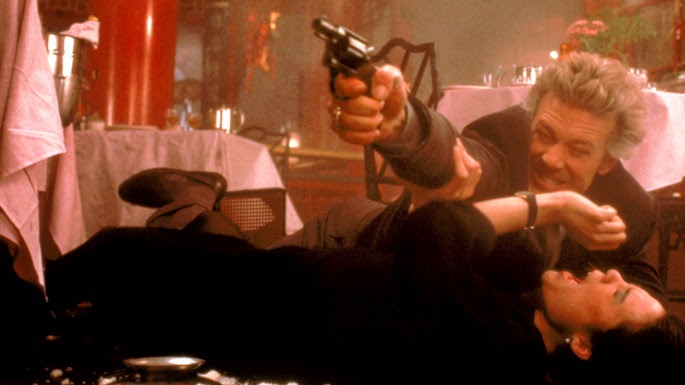 On top of the cultural knowledge and references in the movie, not just of Asian culture but biblical as well (could Stanley’s shot in the middle of his hand with its blood be a reference to the stigmata of Jesus?) , it’s important to recognize that this was the 80’s, after all, and we get the disco scene we all love, and arcade games Pac-Man, Galaga and Defender can be seen. This movie truly has it all.

So for a serious-minded, extremely professional cop/crime drama that has all the hallmarks that we know and love, plus a lot more, it’s hard to beat Year of the Dragon.

Email ThisBlogThis!Share to TwitterShare to FacebookShare to Pinterest
Labels: 1985, 3 and a half stars, Ariane, Caroline Kava, Cop On The Edge, John Lone, Mickey Rourke, Raymond J. Berry, Year Of The Dragon

It's a real shame this film wasn't a big hit for Cimino, I personally prefer it over Deer Hunter.