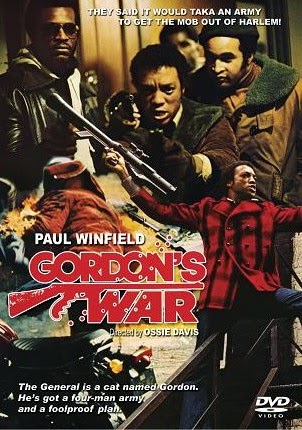 
Gordon Hudson (Winfield) comes home to Harlem after serving in Vietnam. Once he gets there, he is angered, saddened, and shocked by what he sees. Drug pushers, pimps, prostitutes, junkies and other undesirables have turned Harlem into a wasteland. Drawing upon his combat training, he sees his mission as driving out the pushers and pimps, and he simply continues the war once home. In order to do this, he reaches out to his buddies Bee Bishop (Lee), Otis Russell (Downing), and Roy Green (King). They set up a command post in one of the many abandoned buildings in their area. They then proceed to clean up the streets in the most effective way: vengeance.

You may be asking yourself how they know who to focus on, but with names like Big Pink (Heard), Spanish Harry (Lewis) and the dead giveaway Luther the Pimp (Gordon), their work is cut out for them. Will they rid the streets of the baddies and clean up their home? Or will they all lose GORDON’S WAR? Find out today!

Excellently directed by Ossie Davis, Gordon’s War is a winner. Davis adds a lot of nice little, subtle touches that keep the viewer highly entertained. You really do care about Gordon and his compatriots’ plight. You want badly for them to succeed.

The movie combines many of our favorite things that we’re always looking out for: gritty NYC locations, a tough, no-nonsense approach, good character development, the setup of a command center, and the classic “assembling a team” scene, and of course, revenge, revenge, revenge. Among other noteworthy items, of course. This was before another one of our favorites, the “Cleaning Up the Community” montage really took hold - the whole film is Gordon and his friends cleaning up the community. Whether this movie is actually Blaxploitation remains in question - simply because it has Black characters automatically pigeonholes it as “Blaxploitation”?

However, nostalgia fans will see a lot of their favorite things on screen: gigantic cars, fly threads and hip lingo. One of our favorite moments took place in a roller skating rink. No matter what subgenre of action movie may arise, it wouldn’t be complete without the final abandoned warehouse shootout. A very cool chase caps things off nicely.