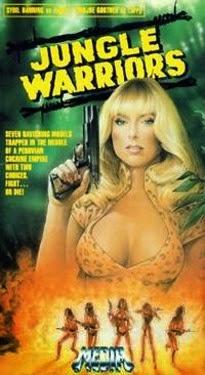 A pretty irritating guy named Larry (Gortner) is in charge of corralling a bunch of models and flying them down to an unnamed South or Central American country (the movie itself was shot in Mexico). They inadvertently land in the thick jungles of drug-smuggling country. This particular gang of drug lords is commanded by Santiago (Smith) and his sister Angel (Danning).

They have a team of thugs led by Luther (Strode). It’s not looking good for the models, and making things even worse is that a mobster named Vito Mastranga (Vernon) and his associate Nick Spilotro (Cord) are collaborating with Santiago and Angel and are in negotiations for future highly illegal doings. With no prior combat training, the models are going to have to take up arms against their captors if they ever want to strut on the catwalk ever again. Will they be able to pull off this daring feat?

You’d think - you’d REALLY think - that a movie about a bunch of models who get together and have to shoot a bunch of guns to escape the jungle and get back at the baddies would be a surefire formula for cinematic greatness. Or at least entertainment.

Somehow Jungle Warriors manages to fumble this potential home run, to use a spot-on sports analogy. Lamely, the movie is talky, boring, slow, lacks action, and the worst crime of all is that it’s not exploitative enough. To compare it to something, Raw Force (1982) is better, and Jungle Warriors kind of falls into that video store shelf-filler netherworld inhabited by the likes of other similarly-themed mediocre flicks like Savage Justice (1988) and Sweet Revenge (1987). Though to be fair and balanced, it is better than Mercenary II (1999). 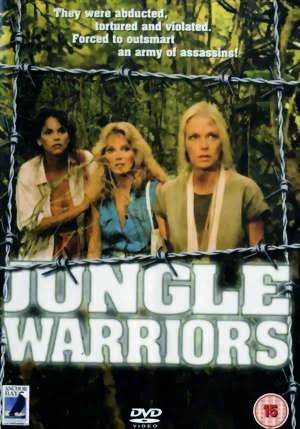 Perhaps you even saw this or the aforementioned titles collecting dust on the shelf of your local video store. Sybil Danning’s face couldn’t be much bigger on the U.S. VHS box art (as was the case with her “Adventure Video” series), but she is painfully underused in the movie itself. Another quite easy thing the movie could have done to improve itself would have been to include more Danning.

Actually, pretty much the entire cast gets the short end of the stick somehow. Woody Strode says nothing, Danning is barely there, Paul L. Smith has no facial hair and does minimal fighting, John Vernon is in a veritable sit-down role, Alex Cord does what he can, and only Marjoe Gortner adds some Woody Allen-like spice to this mush. The models don’t seem to have individual personalities.

It’s a plot we’ve all seen many times before, and they saved all the supposed action for the climax. Some pew-pew machine gun shooting and maybe an exploding helicopter at the last minute doesn’t make up for all the waterfall footage we’d seen for the previous eighty or so minutes.

But on the plus side, 80’s buffs will be delighted to see a vicious-looking drug goon wearing an E.T. shirt, and a too-brief glimpse of the wardrobe girl on the fashion shoot who has a sideways ponytail and is listening to a Walkman with orange ear covers. She should have gotten her own movie, she was the best character. The whole thing tops off with a theme song  featuring the aggressively abrasive, Lene Lovich-like vocals of one Marina Arcangeli. So it all ends on a bad note, literally.

Jungle Warriors is unfortunately lackluster, and it should have been called, if we may borrow a phrase from ourselves, Jungle Slog.

No brainer with fun. Watched him in theatres then the VHS.

I completely agree, a very average movie, although I have only seen the highly edited UK version.

Merry Christmas, Comeuppance. Thanks for being the best movie blog!
May you find the rarest VHS tapes you are looking for in a $1 bargain bin.

Harry: Happy Holidays to you too! That's interesting you saw this in the theater.

Roger: Wonder what was edited? It's a pretty tame R\15\18. Thanks! We really appreciate that. We have some fun stuff planned for 2015.

This one was alright, but like you said too many actors were underused, it's a real shame Danning ended up suffering a back injury that pretty much put an end to her career(as did David Bradley).

Wished that didn't happen to both of them!