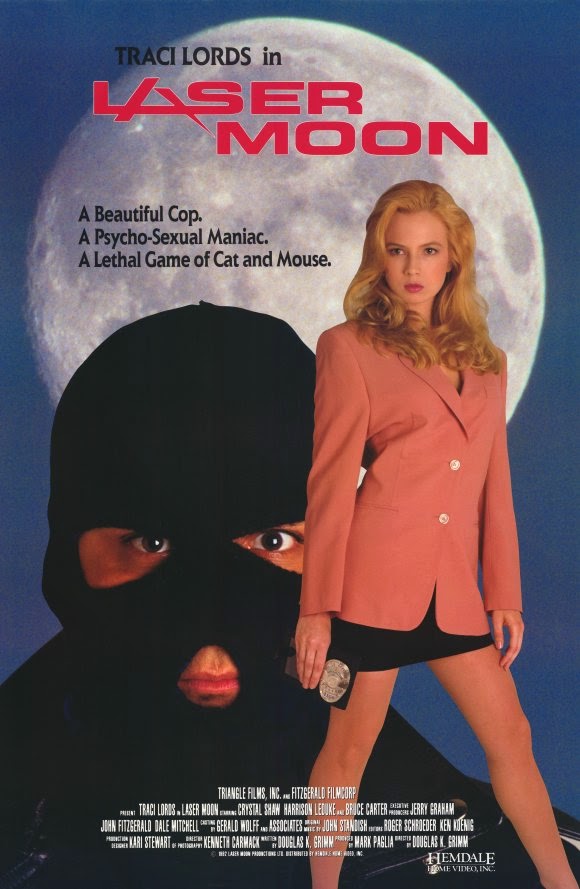 Zane Wolf (Le Duke) is a jaded, cynical late-night talk radio personality. You know he’s the ultimate coolguy because he has an awesome 90’s haircut and smokes cigarettes in front of “No Smoking” signs. When a serial killer starts murdering women every time a full moon appears, and using a laser pointer to do them in - yes, a laser pointer - Wolf tries to get the “Laser Moon Killer” to call into his radio show. Meanwhile, Detective Musso (Bruce Carter, in his only credited film role to date) is hard at work trying to catch the killer, continually reviewing audio tapes while floating in his fishing boat (don’t worry, we don’t get it either).

When enthusiastic and inexplicably beautiful cop Barbara Fleck (Lords) joins Musso on his investigation, their differing styles of police work cause the expected problems that we’ve seen countless times. What will happen to the Laser Moon Killer?

It’s Talk Radio (1988) meets Zipperface (1992) in this extremely junky outing. We’ve seen low-budget production values before, that’s no big deal, but the amateurish nature of the technical aspects hinder the movie this time around. And the pace (and calling it that implies that it may be intentional) is so glacial, it’s an insult to icebergs. I know we’ve said this before, but it’s almost like the makers of Laser Moon had never actually seen a movie before in their lives. Then they decided to make one, sight unseen. Like if aliens from another planet came to earth not knowing what a movie was, but then launched a production anyway.

Which is ironic because director Grimm acted in, wrote and edited Alien Seed (1989). There’s even an Alien Seed reference in Laser Moon. He also had a bit part in Elves (1989) - and that’s the full extent of his movie career. Maybe the fact that Laser Moon is not an AIP (like his other two) made him uncomfortable.

But it’s easy to be tricked by the box art - a front-and-center Traci Lords under an intriguing title - “Oh, Laser Moon, what’s that? Maybe I should rent this and find out...” We say, don’t be fooled. It’s all a ruse. They should have called it Laser Ruse, am I right Brah? Anyway...Harrison Le Duke is your classic Keanu Reeves/Billy Baldwin/Kyle MacLachlan/Colin Farrell/Nicolas Cage lookalike - he even acted with Cage in Fire Birds (1990). Bruce Carter as Musso strongly resembles Night Court’s Harry Anderson, and Zane’s radio station sidekick, Bernie Bernard (Peter Boyles - note the “s”) - is basically a carbon copy of strange entertainment reporter Pat O’Brien.

We actually really feel for Traci Lords here - through no fault of her own, this is the worst movie she has ever appeared in that we’ve seen. The movie is just bankrupt of everything that make movies worth watching. It needed some serious pep, and Fleck/Lords even sleeps on-screen in one scene. The problem is, this movie needed at least one other name star besides her. A Robert Z’Dar, Bo Hopkins, Mickey Rooney - pretty much any of the cast from The Legend of Wolf Mountain (1992) would do. (There’s a trailer for this movie on the VHS.)

Perhaps the best non-Lords performer in the movie is Bob the Cat, who sadly actually died either during or shortly after the film’s release, as the movie is dedicated to him.

So despite the rotary-dial phones, sax on the soundtrack, and unintentionally funny line readings from some of the non-professional actors, the only reason to pick up the Hemdale VHS is the PSA from Orville Redenbacher before the movie starts. One can only imagine a lonely single man renting Laser Moon at his local video store, hoping to see a naked Traci Lords, and instead the first thing he sees after popping in the VHS tape is a screen-filling, gray-haired, bespectacled ORVILLE REDENBACHER entreating you to register to vote. Perhaps the PSA’s producers were trying to think of celebrities that had the most sway with public opinion. Or maybe they were going for the youth market. Regardless, it’s by far the best part of the Laser Moon experience, and one that is totally lost in the era of DVD.

For a snail’s-paced movie that lacks pretty much everything, Laser Moon is a prime example.

Definitely disagree on this one, not Lords finest hour but still decent enough.

Some grindhouse for you!

Lugnet - "All The Way" Grindhouse Video!
Featuring: Christina Lindberg "Thriller: They Call Her One Eye" http://www.youtube.com/watch?v=u2luOuo5-iQ

Venom: We thought this was a real tough sit. A Time To Die or Ice are a million times better.