Yasujiro Endo (Fujioka) is a Japanese businessman who decides to go to the African nation of Imtazi. He believes an ancestor of his was a samurai warrior who somehow got lost in Africa, and he is searching for answers. But for him it becomes a sort of spiritual quest to reconnect with his past. Meanwhile, he is surrounded by other colorful characters, such as Johnny Congo (Henriksen), a Vietnam vet, and Al-Hakim (Saxon), an Arab sheik. Caro and Susan (Holzbog and Eilbacher) have their own reasons for being there as well.

Things really start to heat up when, surprisingly enough, strife occurs in Africa. That seems to give everyone the excuse for violence they’re looking for (or maybe that’s just the audience). Will Endo truly be THE LAST SAMURAI?

Not to be confused with the Tom Cruise movie of the same name, here the Last Samurai in question seems to be John Fujioka. He was a prolific actor that appeared in American Ninja (1985), American Ninja 2 (1987), American Samurai (1992) and American Yakuza (1993). He was obviously as obsessed with “American”-based action movies as we are here at Comeuppance Reviews, and for that we salute him. Clearly Tom Cruise is jealous of this guy.

But here’s the problem: The Last Samurai is a case of the old “bait and switch”. With a title like that, and with a picture of Fujioka on the front brandishing a giant sword, you think you know what you’re in for. But you’d be wrong: this movie is an Africa Slog. Much like a Space Slog, a Submarine Slog, an Airplane Slog, or perhaps a Sci-Fi Slog, An Africa Slog might be fun for the cast and crew of the movie, but it’s not for the audience. After sitting there restlessly throughout most of the running time, you’re GLAD he’s the Last Samurai. 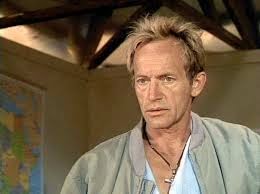 Even the great Lance Henriksen cannot save this. He does his absolute best, and his bolo tie is pretty awesome, but he’s struggling against a wall of incoherent plotting and incompetent direction, which is surprising for the normally talented Paul Mayersberg. Knowing his history, he may have been going for the artier end of things, but it all seems to fall flat. It’s hard to tell what’s going on here and why. Simply putting a bunch of characters in Africa is not the same thing as a plot. But Henriksen - whose name is Johnny Congo, it feels important to reiterate - had faced very similar challenges before, namely with Savage Dawn (1985).

Interestingly enough, his co-star here, Arabella Holzbog, would appear with him again the same year in Stone Cold (1991), which was sort of like a biker do-over to correct the mistakes of Savage Dawn. It was also interesting to see fellow fan favorite John Saxon as some sort of Arab sheik. Saxon’s accent, or Saxccent, set him apart and showed his acting range.

Yes, the beginning of the film has a classy black and white Kendo match, and the climax has some good action, but it’s too little too late, as there’s not much of any in the middle of the movie. The Last Samurai is closer in spirit to Danger Zone (1996), Sweepers (1998), and even, heaven help us, High Explosive (2001), but it’s not that bad.

We don’t want to malign the movie too much, but we felt it did not deliver on its promises. It lacks surprises or excitement. We really wanted to like the movie, but not much happens that makes it easy to like.

We found the Front Row Entertainment VHS at the Salvation Army, and we were excited at first, but it may get put back into circulation there.

I don't know how I can say this without repeating myself endlessly, but bravo for yet another amazing review!

I am married with two small children, a full-time job and a freelancing gig on the side, so my movie "watching" is relegated to sites like this.

I can't thank you enough for not only doing what you do, but for consistently doing it exceptionally well. Anyone can write a movie review, but when you A) only review a specific genre of movies, B) write exceptionally coherent synopses and critiques, C) take the time to include cover art as well as screen grabs, and D) pepper in great puns, you have a clear winner of a website.

My wish for you is that you could somehow get paid to do this full time. I can't imagine how prolific your output would be then. I'm amazed at how often you post.

Wow! What an amazingly kind and nice comment! We truly appreciate it. It really is comments such as yours that keeps us going and we really mean that. We do it for the love the action genre and to inform people. (But if you know a way to make money...Haha)

We'll keep posting Monday, Wednesday, Friday. We have some great stuff planned for 2015 and beyond. Thanks again.