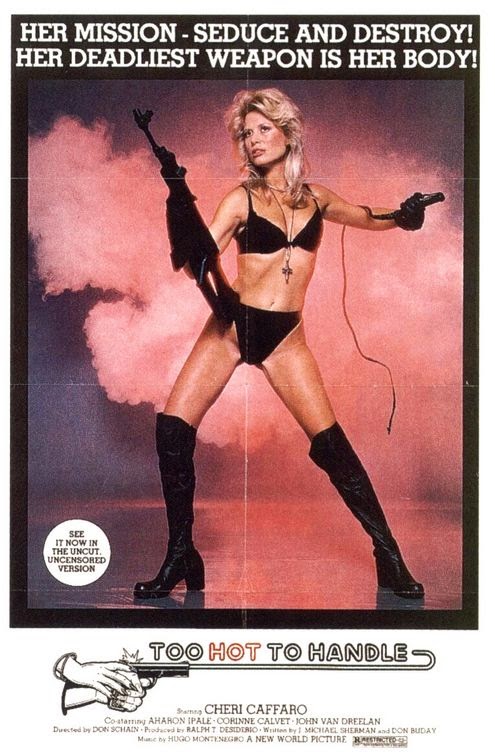 Samantha Fox (Caffaro) is an international hitwoman who “just wants to have some fun” (heh heh) and thanks to a multi-million dollar family inheritance, can afford to be a globetrotting gal who can dispatch the baddies using a deadly combination of wits, Martial Arts skill, gun usage, and sexy sexy sexiness. Her latest assignment takes her to the Philippines where she’s taking down some baddies one by one, all the while using an array of different identities and stylish outfits.

Things get really complicated when Chief of Detectives Domingo De La Torres (Ipale) gets wise to what Samantha is up to - but they can’t help becoming romantically entangled. And what will Domingo’s partner Sanchez (Diaz) have to say about it? Samantha Fox is a woman of beauty and cunning who always gets what she wants...but will she this time? Find out today!

Too Hot To Handle is an entertaining ride and a reminder that there was a time that movies could be firmly in the exploitation camp, but not mean-spirited. The movie is a super-70’s outing that combines kung-fu fighting with afros and bellbottoms to a horns-and wah-wah-inflected funked-up score - imagine an episode of The Love Boat but with much more nudity, killings, and cockfighting. (The cockfight scene was an absolute standout).

Director Don Schain - who worked with Caffaro before on the Ginger series of similarly-themed nudity-based adventure and intrigue movies, here gets the best out of the lovely Philippine locations, and thanks to a variety of factors, the movie is never boring. It’s a shame this was his last directorial effort. He seemed to be improving. 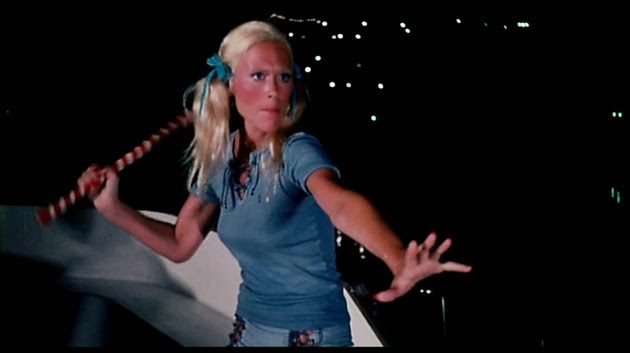 The clothing alone is mesmerizing: Aharon Ipale as Domingo has an impressive variety of ties, many as wide as his shirt. His collars are so huge and triangular, they go off the shoulders of his jacket like pointed epaulets. He never has anything less than cool hair, cool shoes, and even cool pants. And that’s just one character.

Many of the baddies aren’t afraid to mix stripes, colors and plaids, let’s just say that. But to get down to it, the movie is all about Cheri Caffaro as Samantha Fox (who even has sunglasses that say “FOX” on them). The eye candy-level is off the chart, whether she’s at a funeral, or stickfighting goofily with an unknown assailant. There’s even a bondage scene that pre-dates “50 Shades of Grey” by about 40 years. But it’s all in fun, and the classy title song, “Lady Samantha” just reinforces this.

Thanks to the fashions, the Moog-y musical score, the good pace, the fun 70’s vibe and of course the delightful Caffaro, Too Hot To Handle is a winner.