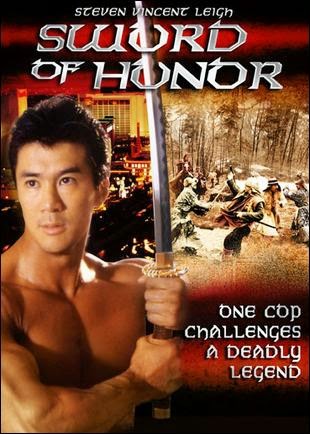 Cops/buddies Johnny (Leigh) and Alan (Pruitt) are Martial Arts experts who teach children their craft at a dojo run by Alan and his sister Vicky (Crawford) when they’re not out chasing the baddies. Alan decides to concentrate on the dojo full time and thus has “one day left until retirement”. The last assignment involves the most sinister Sotheby’s auction ever - a badass sword, known, naturally, as the “Sword of Honor” because of its long history of slicing people to bits. When baddies - mainly mobsters - make an attempt to gain control of the mystical sword, bad things start to happen. Alan and Vicky now must team up to get revenge, fight the evildoers, and, if there’s time, fall in love. Who will make the final chop? Find out today!

We really like Steven Vincent Leigh. He’s an underrated talent, and Sword of Honor is a good vehicle for him. We’ve seen most of his cinematic output, and he’s a quality Martial Artist with a nice personality and good screen presence. He’s perfect for these PM outings (such as Deadly Bet, also with director Tiffe), and teaming him up with Sophia Crawford was a great idea.

Crawford is mainly known for her Hong Kong movies and stunt work, and her background pays off here. It would be convenient for fans like us if she did more Western action movies that are more easily accessible, but such is life. Crawford is like a cross between two Comeuppance fan favorites, Cynthia Rothrock and Gary Daniels (perhaps only in the accent and Martial Arts ability but you get the idea). Nevertheless, the pairing of the two makes the movie worthwhile. 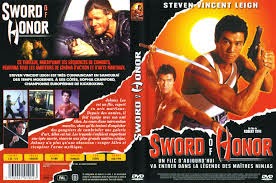 It’s classic 90’s video-store action all the way with plenty of stunts and fights every few minutes, as it should be. Some of the pretexts for fight scenes are hilariously dumb - at a gym, a meathead asks Johnny if he’s done using a particular piece of equipment. Johnny tells him he has some more reps to go. This enrages the meathead and a knock-down, drag-out fight ensues.

Elsewhere, two of our favorite items are combined: the disco nightclub scene and punchfighting. One minute, revelers are tearin’ it up on the dancefloor, the next minute, that same dancefloor becomes a punchfighting arena and those very same dancers are now yelling angrily and cheering like a true punchfighting audience. How quickly their mood changes. Talk about your one-stop shopping.

The aggressor in the nightclub punch-up is a grade-A meathead, and we did seem to notice that there are a lot of weird-looking people in this movie. It has the normal PM professional look to it, but the incidental characters, such as mobsters, bartenders, patrons, and other background artists are just strange to behold. And the weird hair quotient is pretty far up the chart too, as you might expect.

The main baddie could have been a bit more menacing, he seemed a lot like Mandy Patinkin. Patinkin has never really appeared in any movies of this kind, he’s a bit too classy. And some scenes suffer from being underlit, which is a malady that would really plague DTV productions in the coming years after this.  And the actual sword disappears for long stretches and you kind of forget about it. Those are really the worst things you can say about Sword of Honor (unless you’re going to beat it up for its cliches, which we won’t). It’s really a good time had by all.

Sword of Honor is enjoyable 90’s video-store action featuring likable leads and plenty of fighting. PM rarely disappoints, and, despite a few minor flaws, this can surely count as yet another feather in their cap.

Also check out a write-up from our buddy, The Unknown Movies!
Posted by Ty at 24.3.15

This is a great PM movie. Steven Vincent Leigh should have been allowed to make more movies. I have also seen most of his oeuvre, and I think this was his only starring role. Kung Fu Fighting would have been a good song choice for the punchfighting nightclub.

Totally agree. We wished he made more movies too. Could've been more prolific like Don "The Dragon" or Jeff Wincott. Kung Fu Fighting is a better song than the silly nu-metal from today's punchfighters. Haha.