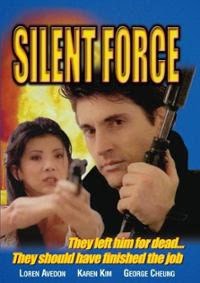 Directed by: David May


Frank Stevens (Avedon) is a U.S. Federal Agent who commands a special ops team known as “The Silent Force”. They’ve come across their toughest assignment yet when they face off against some evil Asian mobsters headed by Pao (Cheung). After the Pao gang kills off a bunch of Silent Force members, Stevens gets mad and goes after them, and all-out war ensues.

Also Stevens tries to save the widow of one of his former buddies, Natalie Woo (Karen Kim). Will the Silent Force be SILENT...aaah, We just can’t come up with a silly pun this time. This movie is just too stupid. It’s not worth it...

Unfortunately, The Silent Force is pretty darn bad. It gives us no pleasure to deliver a negative review, but this movie, sadly, has very little going for it. It’s very poorly and uncreatively written, the editing is abrupt and choppy, it was the late 90’s/early 2000’s, so many scenes are underlit and hard to see, there’s plenty of student-film-style ADR work, and the whole thing is not well-structured and seems very amateurish, not in a good way.

Of course, there’s a lot of terrible acting, but that never bothered us too much in these low budget productions. But you add it all together...and meant to HOLD it all together is Avedon, a man who is not likable and seems to be striving against all available evidence to try very hard to be cool, and this is a surefire recipe for unmitigated disaster. The whole thing has a junky feel and it simply doesn’t work. 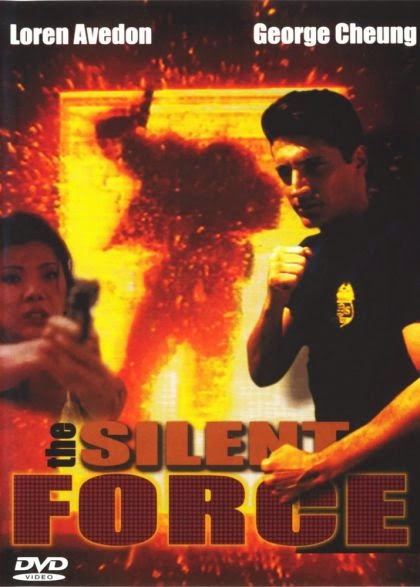 Thankfully, this is the only known credit for “writer”/ “director” David May. Perhaps he saw this botched movie as nothing more than a stumble along the road of his life, and decided to get into another line of work. Good for him. Back in the golden era of the video store, this turkey would have been known as shelf-filler. But by its release date of 2001 (it looks like it was shot a few years earlier) those shelves where disappearing fast, and cheapo DVDs were ending up at gas stations, thus giving The Silent Force the ignominious distinction of being gas-station filler. And it’s not even useful for your life, like, say, gasoline, antifreeze, or those little tree car air fresheners.

It does have some classic cliches: the BYC (Black Yelling Chief), some very dumb one-liners, and the prerequisite torture (though in this case it’s pointless torture that goes on way too long - like everything else in the movie, they screwed it up and there’s no sense of  pacing). And not only is Avedon trying really hard to be cool, he looks like any number of different people, depending on the scene he’s in. In various scenes he resembles:

Just an observation. Avedon needs screen presence that doesn’t recall any other famous faces. In one of his more Tom Cruise-esque scenes, a song plays on the soundtrack that is a blatant knockoff of “Danger Zone”, presumably to drive the point home. He really wants you to think of him as 1986-era Mapother. In some scenes it sounds like Avedon is reading his dialogue off paper in a studio somewhere else. Elsewhere, he seems to be taking this regrettable outing way TOO seriously. There’s no balance with this guy.

A glimmer of hope arrives (way too late) when, towards the end of the movie, Matthias Hues shows up. He begins beating up Avedon and our attention perked up, as we thought it might have a saving grace. We weren’t expecting a No Retreat, No Surrender 2 (1987) situation, but their fight was too short and extremely disappointing. It all leads to those same familiar questions: Who watched/enjoyed this? Did the filmmakers think this was good, or did they know it sucks?

As we all know, by 2001 the golden age of DTV was over, and if you needed any more proof of that fact, here it is. The Silent Force is an insultingly dumb slog to sit through, so make sure you avoid it.

I think Avedon is a decent actor and wish he was in more films.

Also I disagree about the golden age being over, I think there have been plenty of damn good DTV films since then.

There has been some stand-outs like Ninja 2 and some others, but the 80s and 90s DTV were more tongue in cheek fun with no shaky cam or blue tint.

I don't really know that many films with blue tint off the top of my head, and i've mainly seen shaky cam in theatrical films like the Bourne series.

I liked this movie. I agree with your points that it looks junky and is choppily edited, but it has lots of action. For the DTV wasteland of 2001, where a good action movie was as hard to find as a drop of water in a Cirio Santiago post-apoc movie, it's good enough. Avedon made some good movies, e.g. the No Retreat, No Surrender movies and The King Of The Kickboxers. He was offered the starring role in Bloodfist, but declined.

The golden age of action movies seems to have been between 1980 and 1994 by my estimate. Of course, good movies are still being made, e.g. Ninja 2 and The Raid, but in a much smaller quantity.

Venom: A lot of modern day movies and tv shows have it like Cold Case.

Roger: We agree especially with your last point and the rest of the comment is well taken. 1980-1994 was the golden age and we'll still discovering new gems today. We hate to be so harsh on the Avedon but when we compare something like this to the golden age, this doesn't compare. Wouldn't it be amazing if there was a video store with all the golden age action we crave.

Yeah I do see it in TV shows, but I can't think of too many movies that use it.

I agree that this is not one of his better films, but did Avedon pee in your Cheerios or burn your house down? You guys give credit to his martial arts in all your reviews of his films, but you otherwise seem pretty down on his work. I've seen him described here as "not likable," "insufferable," "annoyingly cocky", and "weaselly," who tries "really hard to be cool" and whose acting is "horrendous." I simply don't see the the same actor as you guys. He frequently plays cocky characters (he's said he can be cocky in real-life), but all of them get humbled in the stories and usually achieve a sort of redemption. I've always liked his humor and brashness on screen and I feel he's much more natural in his dialogue delivery than guys like Dudikoff or Gary Daniels. That said, I appreciate your opinions because it gives us something to discuss! But I'm firmly on Team Avedon.

Venom: Most of the Saw movies have this effect.

Karl: We definitely disagree on his acting style!, he's just unlikable to us. We like Dudikoff or Richard Norton for likability. But his martial arts ability is great. Excellent fights in King Of The Kickboxers and No Retreat, No Surrender 2.