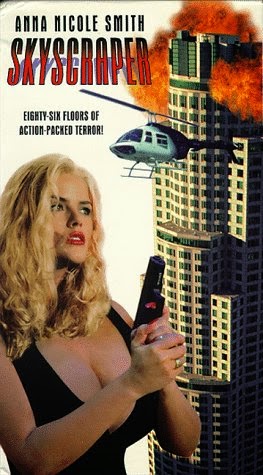 
In the pantheon of action stars that perhaps should not have become action stars, a few names come to mind. Judge Reinhold. Steve Guttenberg. Jay Leno. Steven Seagal. Now we can proudly add to that storied list Anna Nicole Smith, who was the obvious choice to stand in for Bruce Willis in a classic 90’s Die Hard knockoff (or “DieHardInA” movie - see our review for Sudden Death to see a comprehensive list).

Of course, usually a DieHardInA movie takes the Die Hard template and moves it to a certain location, like a water treatment plant or a hockey game. Here, it’s Die Hard in a...building. How they ever got the idea to put this plotline in a skyscraper, we’ll never be able to figure out. But that’s the issue: this is really just standard fare, with only the novelty of the Anna Nicole stunt casting to set it apart. So it really doesn’t matter that the action was moved from a skyscraper to a skyscraper (as if we, as viewers, were having trouble understanding that, they felt the need to call the movie Skyscraper). It wasn’t the location that needed to be changed, it’s the star. Instead of a water treatment plant, they got Anna Nicole. 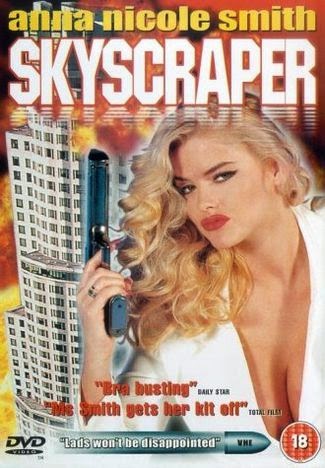 Anyone who is familiar with PM will recognize their hallmarks here: well-done blow-ups, plenty of gun-shooting, rocket launchers (this time with “rocket vision”), an exploding helicopter, and a familiar cast and crew of regulars such as Raymond Martino and fan-favorite Malibu (AKA Deron McBee). McBee looks so feminine here, when he fights Anna Nicole, it’s kind of hard to tell who’s who.

Perhaps that’s why they made his long, flowing mane brown instead of its usual blonde, as one of the sole means of differentiation. He and his other main terrorist partner certainly dress for success: rather than wearing fatigues or something like that, they wear leather pants and man-blouses. 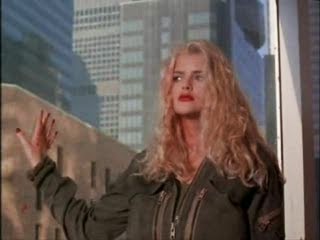 Seagal and Anna Nicole do have many things in common: they both struggle with their acting, they both struggle with their action scenes, and they’re both pleasantly plump. If they ever had a baby, the results might be along the lines of Beverly Hills Ninja. But without the talent of Chris Farley. To be fair, though, these were the pre-Trimspa days. While we do have to wait a while for it, we do get some Anna Nicole-Fu.

Before that, we get some Skinemax-style nudity/sex scenes (mentally take yourself back to 1996. If you rented Skyscraper and the nudity factor wasn’t there, you would feel wicked cheated. However, “look not through a knothole, lest ye be vexed” as what nudity there is is more freakish/odd than hot), and plenty of inane dialogue such as “I got a bad feeling about this!” - though, to be fair once again, someone does say the time-honored classic “We got company!”, which we always notice.

So while it was the 90’s - the era of pagers - computer graphics in the movie really do resemble Pong. We know it was low-budget, but come on. We think the Zitex Corporation (is this where they create zits?) can probably do better. But the bottom line is, we all know why we’re here. For the freakish novelty of Anna Nicole Smith in a PM action movie. If that’s something you think you can handle, by all means, take a ride on Heliscort (who comes up with these names?) and have some fun with the so-bad-it’s-goodness.

Also check out a write-up from our buddy, Exploding Helicopter!

Nice review (despite the Seagal jibes)

Long time ago a rental. Never bought it. In mind concerning the German Charles M. Huber. Wondered to see him in a PM-Movie.

Nice write up guys. Yeah, you can definitely have some fun with this, but the whole package just falls short of being something I'd really recommend to someone.

Thanks for the shout-out for my review!

I agree. This one was much better than her other PM movie To The Limit.

Lee: Thanks! Any reason to sneak in the nudity. Haha.

Harry: Definitely a movie you rent and not buy.

Exploding Helicopter: Thanks! Totally agree with your comment, it has some campy fun value, but the movie itself is a bit poor. Haha. You're welcome. Happy to link your great review.

Roger: Defintely agree, haven't seen that one in a long time. Used to have a tape but it broke.