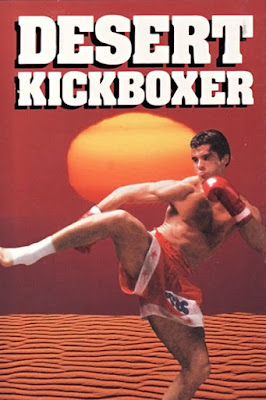 Joe “Hawk” Highhawk (Newton) is a former kickboxer turned mulleted lawman in the dusty deserts of  California. After a tragedy in the ring, Hawk now devotes most of his time to whittling.  And also to his job as Deputy. He even has some form of PTSD, constantly flashing back to what happened in his earlier life. When diabolical drug runner Santos (Smith), and his lieutenant Bruno (Foley) start causing trouble in the dusty ol’ town, and start going after his newfound friends Claudia (Aronson of American Ninja fame) and Anthony (DeFrancisco), it gives Hawk a reason to live again, and to dust off his old kickboxing skills to use them against the baddies.  Will Hawk triumph in the war against drug runners and find redemption?

Right from the beginning of his career, Isaac Florentine was turning out solid movies like this, and even his trademark sound effects are here. Lots of whooshing, crunching and “splat!” noises are heard on the soundtrack, for even the most mundane actions. If someone moves a muscle, it sounds like some guy has mic’d up a bunch of Nickelodeon products like Gak, Floam, and Zzand and are throwing them around with abandon. But where Florentine shines, of course, are the Martial Arts/fighting action scenes, and those are some of the highlights of Desert Kickboxer. It’s easy to see why he followed this up with the similar Savate (1995). 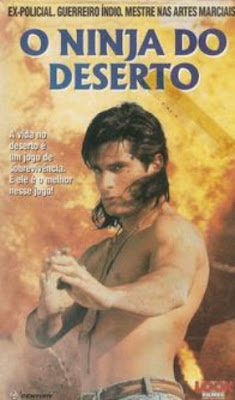 This was our first exposure to one John Newton. He looks like a cross between Ken Wahl and John Stamos. Evidently Hawk is supposed to be some kind of Indian in the film, though Newton looks about as Native American as Regis Philbin. Even Mark Gregory in the Thunder trilogy was closer to Indian than this (and come to think of it, there are a lot of similarities to the Thunder movies in Desert Kickboxer). Newton’s Martial Arts abilities are competent, however, and if nothing else, we can admire his mullet, which was clearly crafted as carefully as the sound effects and the Martial Arts. Naturally, before his final assault on the baddies, he does some form of shirtless Native American Tai Chi on some high desert rocks.

But as Hawk is going through his character arc from flat and none-too-likable to flat and sensitive, he has to deal with some pretty tough baddies. Sure, we all love Paul L. Smith, but his lackey Bruno is far more intimidating, not to mention agile. You know if a baddie is doing Martial Arts in a suit, the guy is going to be a hard opponent to beat. Bruno is so tough and evil, he uses actual Mexican migrant workers as human training dummies. But he didn’t reckon on one thing: the awesome power of Newton.

Featuring some great early-90’s computers, Desert Kickboxer is perfect for Florentine fans that may not have seen his early work. It’s a testament to its entertainment value that, to anyone else, it would have been just another DTV item, but to fans of the genre it retains its staying power.

Cool to hear about another film with Judie Aronson. I've got a major soft spot on her from American Ninja. Does she look as cute in this?

Sure she is! Always worth-watching.

This one is pretty fun. Wonder where John Newton is today?