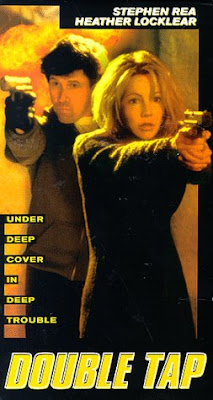 FBI Agents Hanson, Hamilton, Burke, and Rodriguez (Locklear, Williamson, Gage, and LaSardo, respectively) are a tight-knit force that tend to hole up in an abandoned warehouse (where else?) as they fight the baddies. Hanson is a fearless undercover agent who likes jigsaw puzzles. A new wrinkle comes into all their lives in the form of Cypher (Rea), a hitman who has not one, but two signatures to his killings: he shoots them twice in the head (i.e., he “double taps” them), and he leaves a white rabbit’s foot by the body.  He’s also heavily into lawn care.

As the lives of Hanson and Cypher draw inexorably together, other complications arise in the forms of Nash (Greene), Ulysses (Howard), Escobar (Martinez) and Fischer (Edson). Will the team of agents bring down Cypher - and should they? Or will a bunch of people end up dead and stuff? Find out...?

There were a lot of movies like this in the later 90’s. It seems like practically every other movie on a video store shelf from approximately 1997-2000 was a about hitmen, gangsters, or both. In the post-Tarantino landscape, DTV producers figured they could make movies like his on the cheap - and why not, all he was doing was recycling earlier ideas as well. Enter Underworld (1996), Suicide Kings (1997), A Better Way to Die (2000), Blood, Guts, Bullets and Octane (1998), Truth or Consequences, N.M. (1997), Double Deception (2001), Killing Time (1998), Sworn Enemies (1996), and on and on, ad nauseam. You know the type of movie we’re thinking of - leave a comment if you can think of some more. Well, Double Tap is one of those. Despite the presence of a practically ALL B-movie star cast, this boat is taking on water and sinking quickly. Lone Tiger syndrome strikes yet again.

And because it was the late 90’s, clearly the movie had to be “edgy”. It was a time of Mountain Dew commercials with radically awesome snowboarders jumping out of helicopters as they slammed their ‘Dew. (For those who don’t know, you slam a Dew, you do not drink a Mountain Dew). In this context, we now have Heather Locklear at a scuzzy porn theater, sitting in front of the screen and smoking crack. Hooray. Load it all up with a bunch of unnecessary and pretentious “stylistic choices” like crazy cuts, freeze frames, breaking up the movie into chapters with titles, etc.

Though it was nice to see Locklear in an atypical role like this, she’s a classic case of  cognitive dissonance - while she certainly does not look like Hillary Clinton, her voice is a dead ringer for Clinton’s. It’s odd to hear that voice come out of the beautiful Locklear. You think at any moment she’s going to flatly, loudly intone something about Bill or “what difference does it make?” But Locklear is just one of many in this ensemble cast, and we believe the show was stolen by someone else. ..

It was also nice to see LaSardo in a good-guy role, which is rare for him. He gets more screen time than usual, and he makes the most of it. This is truly top-notch LaSardo. One of the main draws of the movie is Stephen Rea, also in an unusual role. (does this movie only exist so the filmmakers can brag about some low-grade stunt casting?) Peter Greene plays essentially the same role as he did in the aforementioned Sworn Enemies, and Terrance Howard is a drug dealer or something. While there is no Locklear-Fu or Rea-Fu, there is plenty of shooting and a few blow-ups. The cast does what they can, but its vibe is off-kilter to the point of off-putting, and it has a junky feel to it, and on top of all that, it loses steam a lot.

We would say it loses focus, but we’re not sure there was ever any focus to lose. But further reinforcing the 90’s vibe is the fact that the score is by Moby. Apparently Goldie or Tricky weren’t available. They must have been making B.U.S.T.E.D. (1999) and City of Industry (1997), respectively.

We were expecting more - a lot more - from director Yaitanes, who had previously directed Comeuppance favorite Hard Justice (1995). We thought teaming him with Stephen Rea and an all B-Movie star cast would equal gold. Not so much. We didn’t think he’d have to trowel over the cracks in the script with a bunch of  wacky editing and cinematic trickery. As we always say, don’t try to be “cool”, try to be good. Double Tap has, to date, never received a U.S. DVD release. We think we know why.

I mostly agree here, I was expecting more from this film and it just wasn't that memorable, it was a bit too slow moving at times, though I will say Locklear's performance was pretty good.

Yeah, vaguely heard of this film and can never really find it. All I know is that Joel Silver produced it and it's sort of low grade passable but not outstanding action as far as late 90s films go.

Neat to hear Kevin Gage and LaSardo were neat in their rare heroic roles. I'll have to ask LaSardo about making this one when we meet up again sometime.

Venom: We are in agreement. Locklear and the whole cast was solid. Wished the movie was better.

Jeff: Definitely get back to us if you can LaSardo about this movie. Would love to hear his thoughts on it.

How about "Things To Do In Denver When Your'e Dead" (1995)??? That seems to fit your list. And has CR favorite Treat Williams as a REAL Treat for us playing a psycho killer who lives in an apartment filled with gallon water jugs of his urine because he can't leave because hitman (?) Steve Buscemi, as fedora hatted Mr. Hush or something is coming to kill him. But our dear Treat gets the drop and says "I AM GODZILLA, YOU ARE JAPAN!", yes!
Also, anything on celluloid with Christopher Walken as a quadriplegic who asks his hired goons to "take my cock out" is just plain fabulous. It's the movie that will forever be ingrained in my stained brain as introducing me to the phrase "give them buckwheats", which apparently means assasinate a man by shooting him directly into his rectum, which our fabulous dialogue explains will make the bullet take its time twisting through a persons guts and such. So think that every time you see an old SNL clip where Eddie Murphy plays Buckwheat from the little rascals. Wookin' por nub indeed.
We even get Buscemi-Fu, which no director or cinematographer in all the multiverses can make look threatening in the least.
3 stars.
But still a better Warren Zevon song than movie. Excelsior!

It's Walken and Treat at their best for sure. Lots of crazy dialogue you can't get away with today too. Haha